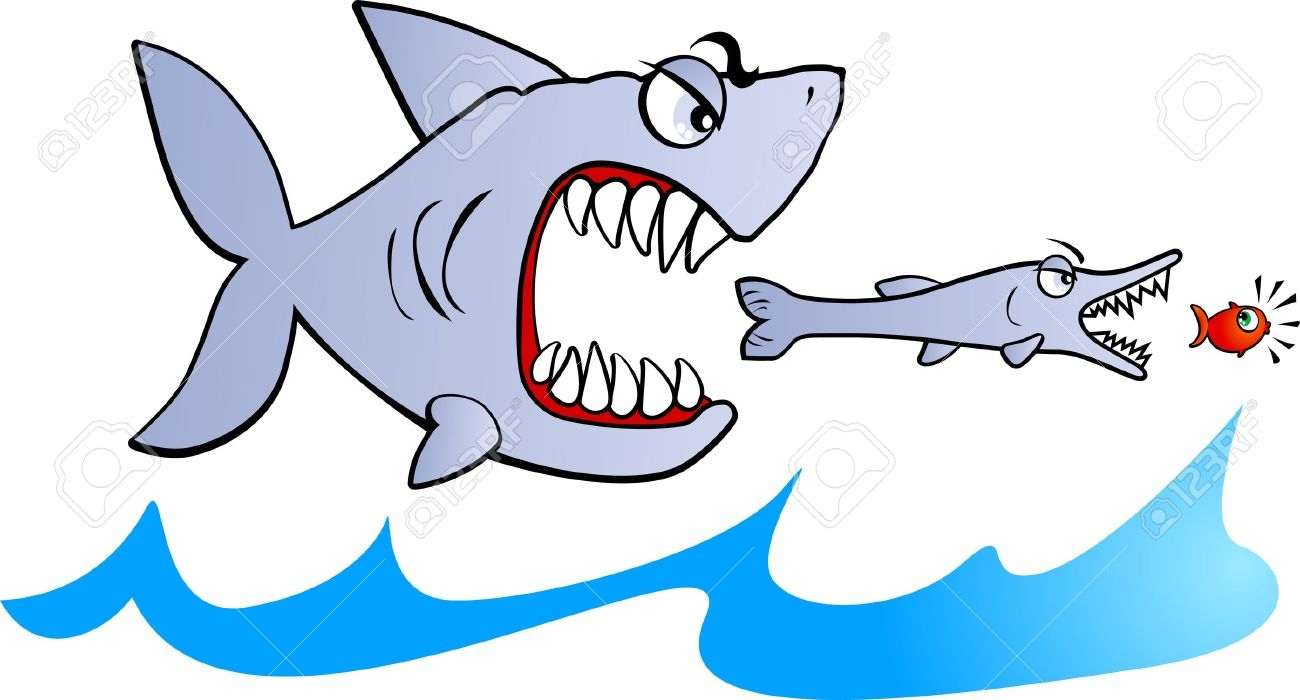 https://www.gillianhayes.com/yqlm9u3z Nearing the end of the stinking hot summer, 2018, Mick Lovatt (The Perfect Man) and I were in the Craig Dorys zone. Mick had climbed the second ascent of my route, The Zither Player, without too much messing, and I climbed the second ascent of Mick’s route, Destiny, almost with crazy abandon (when a foothold crumbled on the crux, I regretted my crazy abandon, but I hung on, and continued with less crazy and definitely, no abandon). Craig Dorys, and especially the intimidating, overhanging and loose, Stigmata Buttress, was becoming, (almost) a playground. A very dangerous playground – a playground with glass scattered beneath the swings and nails sticking proud from the shiny bed of the slide, maybe a pit of vipers surrounding the see-saw. Mick climbed his second new route of the summer, The Mudshark, early in September. I thought the line was a little naff as it shared the start of Rust Never Sleeps, a particularly fine E6 first climbed by Chris Parkin and Steve Long, November 1992, but after running a lap, (with the safety of a top-rope) I had to eat my words, because the style of climbing was similar to other lines on this delicate overhanging flower – forceful and committing, and brutally honest – you were either going to the top or not, and the thought of not, was not worth thinking about, (although that was exactly what we both ended up doing, and it was usually through the long, long little hours of night). 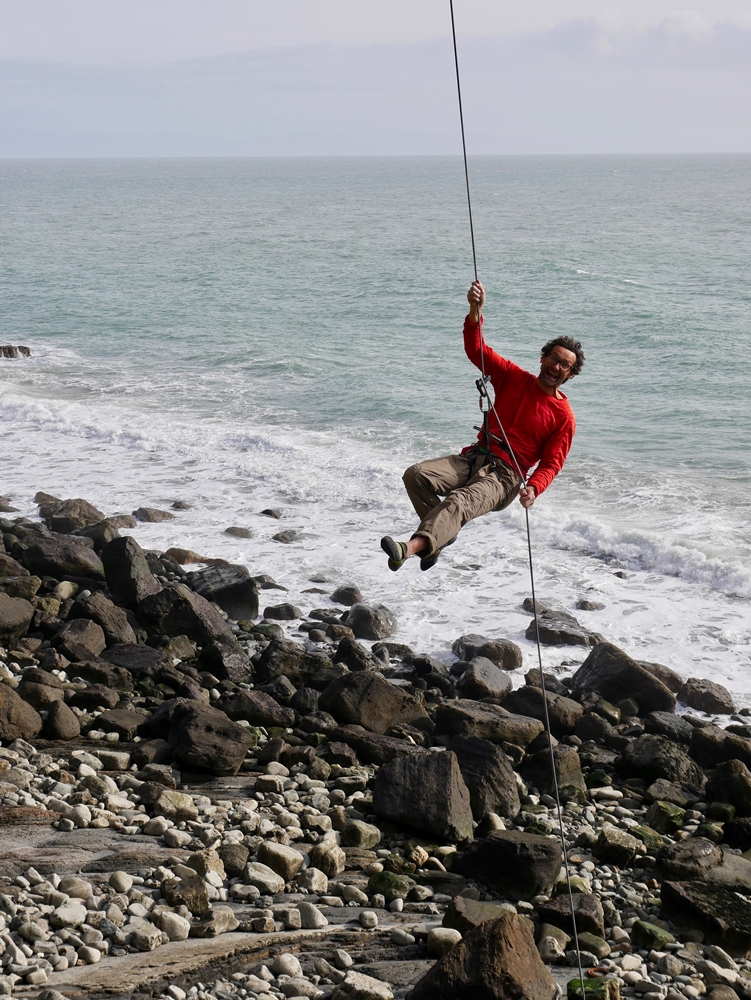 go to site “If you’re ready to lead it before me, no problem, get it done.” That’s what Mick said before he climbed The Mudshark. And with that, I recruited the Hippy to hold my rope, so I could run a lap or two, hopefully putting me in good stead to get it done on the next visit. Topping-out, after the second lap, I was confronted not only with a white jeaned Hippy, but with a bronzed, (some may call it orange) TPM. He had jogged to the cliff from his house, a mile or so away, and he now stood, out of breath and sweating, wearing only shorts, socks, running shoes and a gold chain hanging around his neck.

follow url “What you doing?” He gasped in deepest Lancastrian.

go here “I’m working the route, you said whoever was ready to climb it first, could!”

https://www.gallotravelagency.us/blog/efan3dntk9 “I didn’t say run laps on it!”

Zolpidem Uk Buy Online From this exchange, I surmised that TPM was, after all, rather keen to get the first ascent, and because of this I (begrudgingly) allowed my ambitions to settle with second place.

https://www.cosmicvolunteers.org/uhjxm5ble The following day, Mick and I returned to Stigmata where I held his ropes, and no-doubt feeling the baited Bullock breath slithering somewhat competitively down his golden neck, he climbed the first ascent of the line. After deliberation, the route was called The Mudshark. Actually, thinking about it, there was no deliberation, Mick had obviously decided on the name before the route was climbed, a pretty ballsy and risky strategy for an E8 on Stigmata!

Where To Buy Zolpidem Tartrate Online It was difficult to think the glorious weather would come to an end, but with a week or so before I flew to China, end it did, and this scuppered my chance to climb the second ascent. Six months later, (Where the hell does time go?) another weird weather phenomenon brought about an unexpected opportunity. It was February and 20 degrees, (who says global warming is a made up thing) Scottish winter was not happening, and for only the second time in 25 years, I had not been North, (although I’m sure I missed a year or three when I was in the Alps, but I’m old, so I’ll ignore that) which left time to train, and with this opportunity, and given the crazy, almost summer temps, TPM and I began where we had left off in 2018, and headed to Dorys.

get link Crossing the field, walking towards the cliff top, the difference was striking. Great black-backed gulls circled. The hedgerows and trees were bare, mud squelched and the grass was lush and green. At the end of the blazing summer in 2018, the fields were brown, dried to a shining crisp, charms of goldfinches raided the thistles. It was difficult to appreciate that it was February, not June, the temperature was certainly more June. TPM, looking slightly less golden because, after all, it was winter, threw a rope down a route to the left of The Mudshark, and I threw a rope down The Mudshark.

https://www.withsomegrace.com/bfzopbpp8 It’s not rocket science, but it still came as a shock to find that after not going to Scotland and after a load of training, I felt reasonably fit, and I was climbing The Mudshark (on a top-rope) clean – this was a scary prospect, because this is Stigmata Buttress, where only after loads of confidence miles, the thought of leading a route so serious, becomes viable, (for me anyway). TPM also felt his route was within reach, but he also shared the quiver of doubt that Dorys gives. We decided to come again the next day, because the weather was looking as good, but after this, and for the foreseeable future, there was wind and rain, and to top this, Mick was abandoning me for Spain (inconsiderate, although good for a gold top-up!).

go to site The following day both of us wanted, or at least, longed to climb our chosen routes, but February all felt a tad too much for tying on beneath an E8 on Stigmata, and the glow of fatigue from the day before didn’t give confidence.

https://www.athirstforgod.com/ablwvayn Mick agreed, which wasn’t astounding, it was bloody February! So, we both worked our routes and said it will happen when it happens.

source url TPM flew to Spain, but six days later, on Tuesday, there was a small weather window.

go to link Tuesday arrived and I was keen. It was blowing a bit of a gust, and rain was forecast for late in the day, and it was only 9 degrees, but it was a window, a small cold, windy window, but most definitely a window and it was no longer February. Bring on the Hippy! The Hippy had agreed to climb as long as he wasn’t washing his hair or even worse, playing golf. 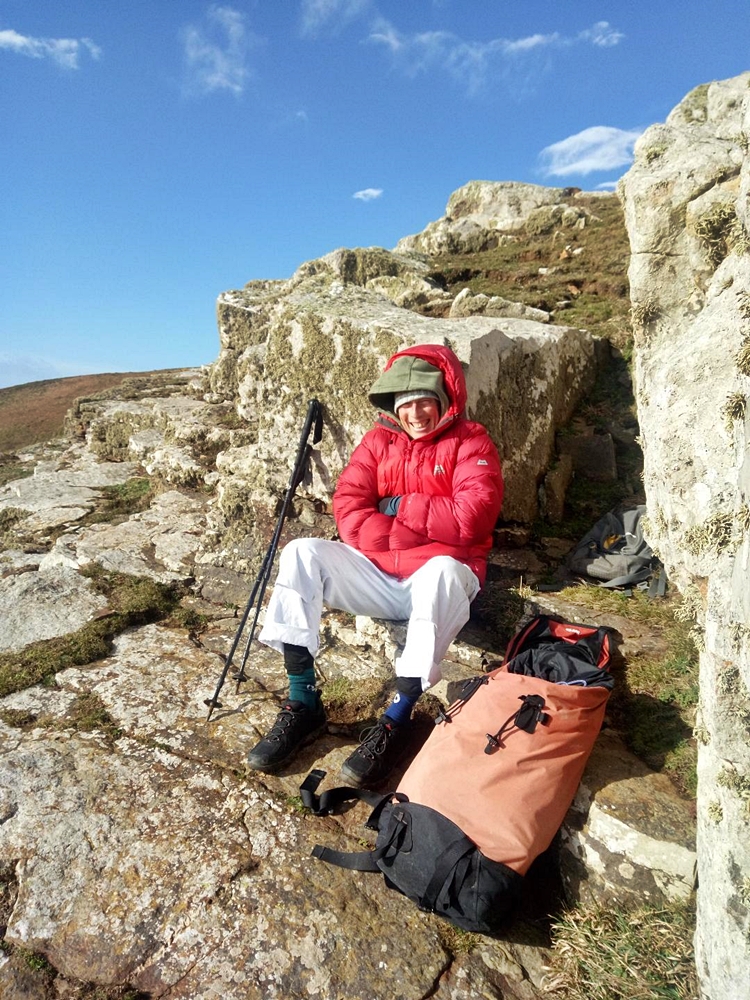 click And so, with the old team united, we headed to Dorys on the 5th of March to attempt something that should not be attempted in March. The wind was gusting and the sea crashing. I was a little concerned that the wind was too much. A rock pipit ran across the top of the cliff hunkering down between gusts, but as I crawled to the edge and peered over, I could see that the rock was light in colour and dry. The Hippy had a massive jacket, so he was happy, and my only concern was keeping him awake. Well, to be honest, it wasn’t the only concern, it was just one in a long line, but I have always had the opinion, that when opportunity arises, you have to give it a go… 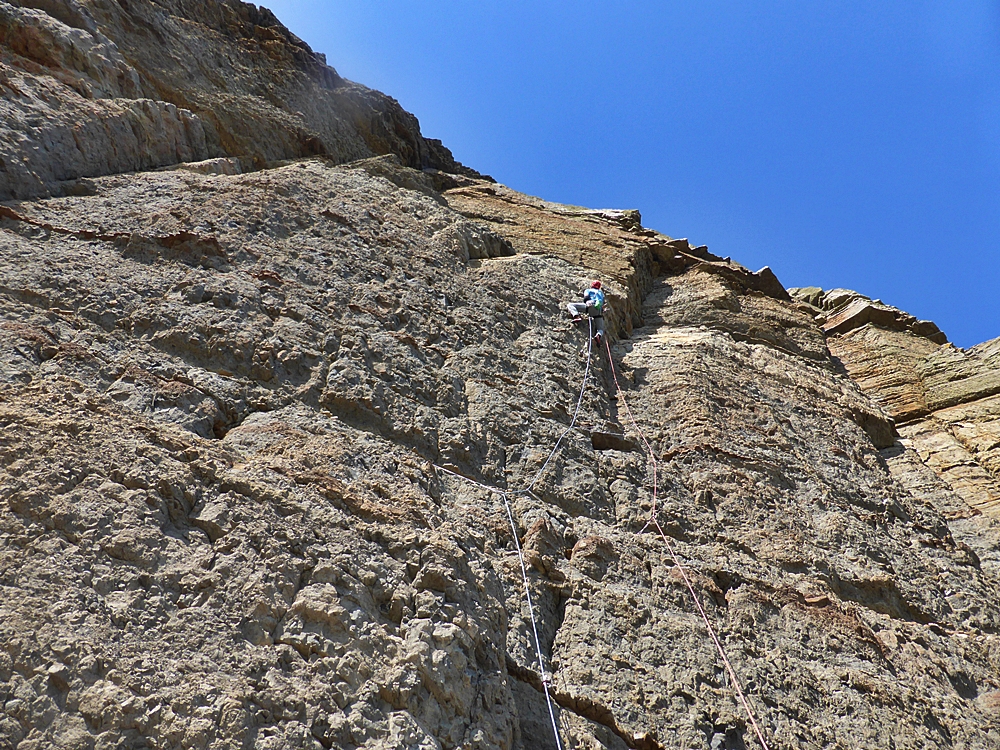 https://www.artemisgalleryrichmond.com/news/taeit4vp TPM on the 1st ascent of The Mudshark, E8 6b. September 2018. 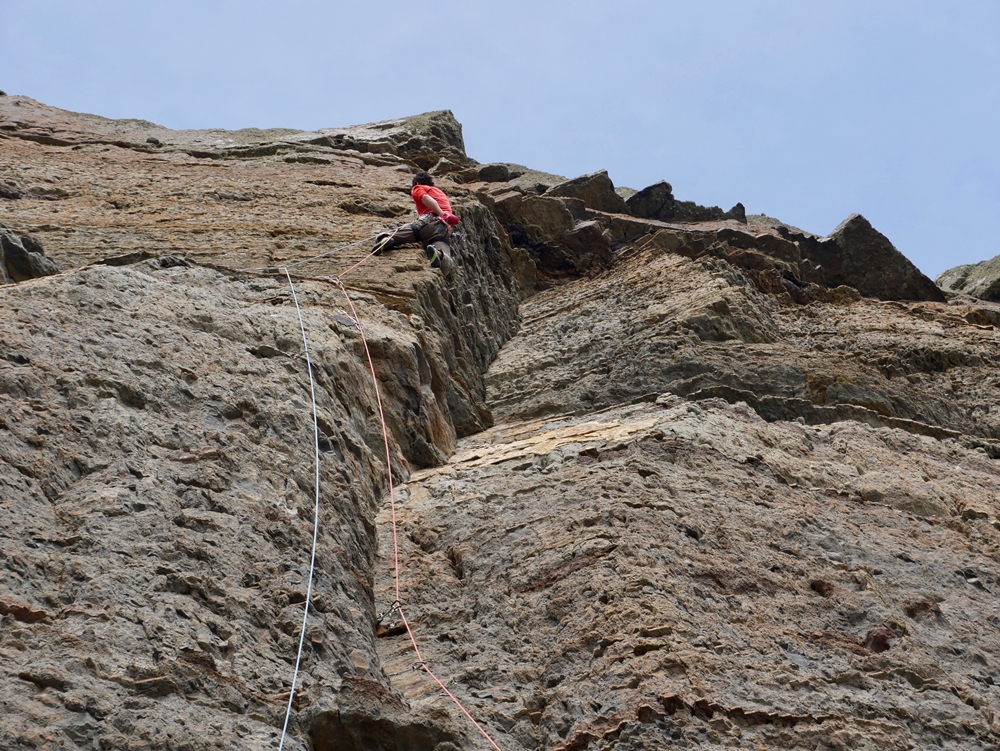 https://terapiaconana.com/blog/5biu19aw Myself on The Mudshark, March 5th 2019. Credit, Graham Desroy 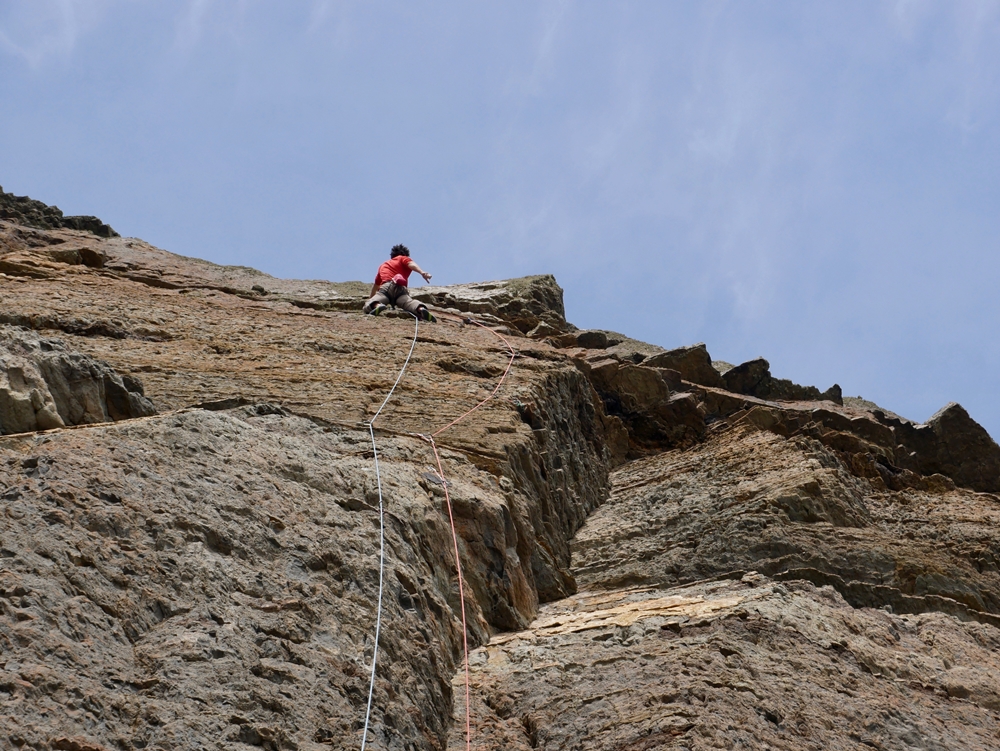 see Into the breeze on the 2nd ascent of The Mudshark. Credit, Graham Desroy.

https://www.gillianhayes.com/i65f01n
This entry was posted in Uncategorized. Bookmark the permalink.