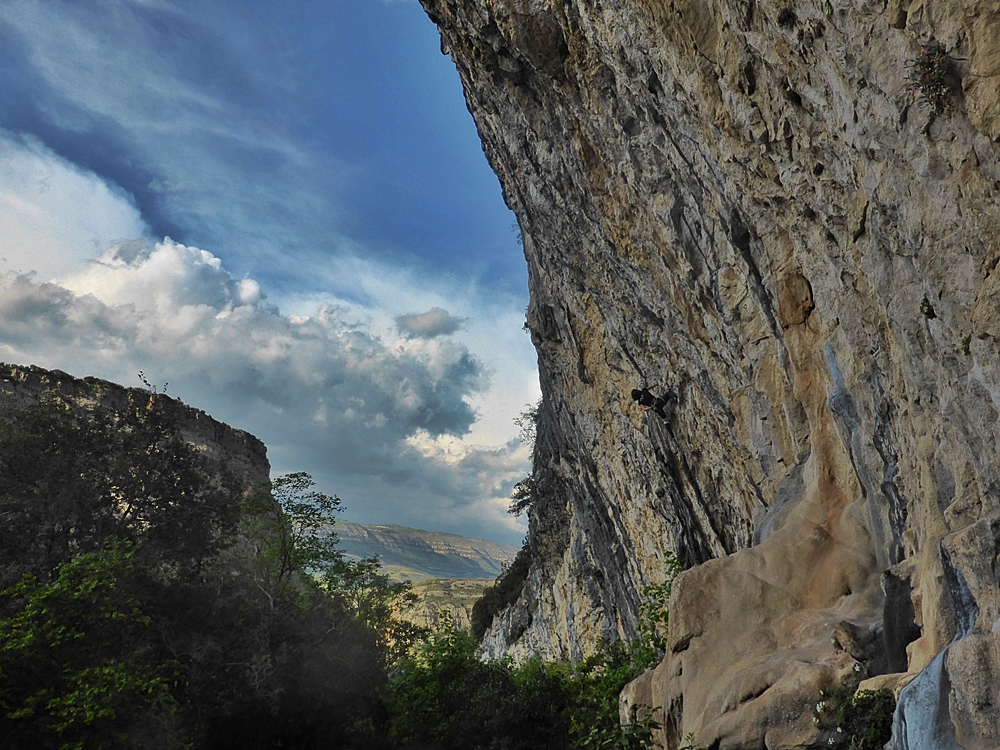 I’m rock climbing close to the Pyrenees in Catalonia at the moment. The elevation and the spring time add to the clear and fresh feel. The climbing conditions on Regina, Rich Kirby and my chosen crag, are perfect. Regina is a steep and uncompromising forty-minute walk from the parking spot, on the outside of the road and train tunnels near the busy town of Tremp. The road weaves along the gorge: beneath rock walls, above the river, and beside the reservoir – it is a formidable feat of engineering. But as we climb, two days on, one day off, I can’t help thinking that the birds we share the crag with have the upper hand in both climbing and engineering.

It’s a small, cosmopolitan and friendly climbing scene at Regina: Spanish, Japanese, French, German, British. The easiest climb is an awkward groove, given a grade of 7b, so the generally accepted warm up is a more straight forward, but of a higher technical grade of 7b+, which is no warm up, but with no routes of a more moderate grade, or friendly character, that’s how it is! A couple of 7c’s, the odd 7c+, but that’s it, all the other climbs are 8 and above. The crag is so steep, the dirt at its base receives no rain, and because of this, its dry, so dry it resembles sand, but instead of shells and crispy seaweed, this dirt-sand has lumps of broken rock on its beach. Dribbling on its coast, between the limestone sea and the sand-dirt beach, are glassy mushrooms of brown blossoming limestone. The crag itself is a filigree of grey and black and orange tufas. Slim, wide, rippled, rounded, square, the limestone veins provide intricate puzzles for climbers who scream and hang and hyperventilate and fall.

Ignoring all of these somewhat clunky human efforts are the birds that make Regina their summer home. The house and crag martins flit and twist, with a scream, a swoop, and a ruffle of wings to settle into a mud nest, the envy of the engineer, constructed deep inside a dark overhang. The mouse-like, short-toed treecreeper scampers up the side of a grey tufa, clinging on with toes stronger than any climbers’ fingers. More flamboyant than the treecreeper (and some climbers), brightly dressed in carmine-red, the wallcreeper makes an occasional, jerky visit to brighten the day. High overhead, in the clear sky, the griffon vultures turn circles, oblivious to the climbers who are too alive to be of interest. Floundering and fighting, before falling and once again hanging, I look up to see the black and white of a pair of Egyptian vultures. That’s better. My mood is once again lifted. 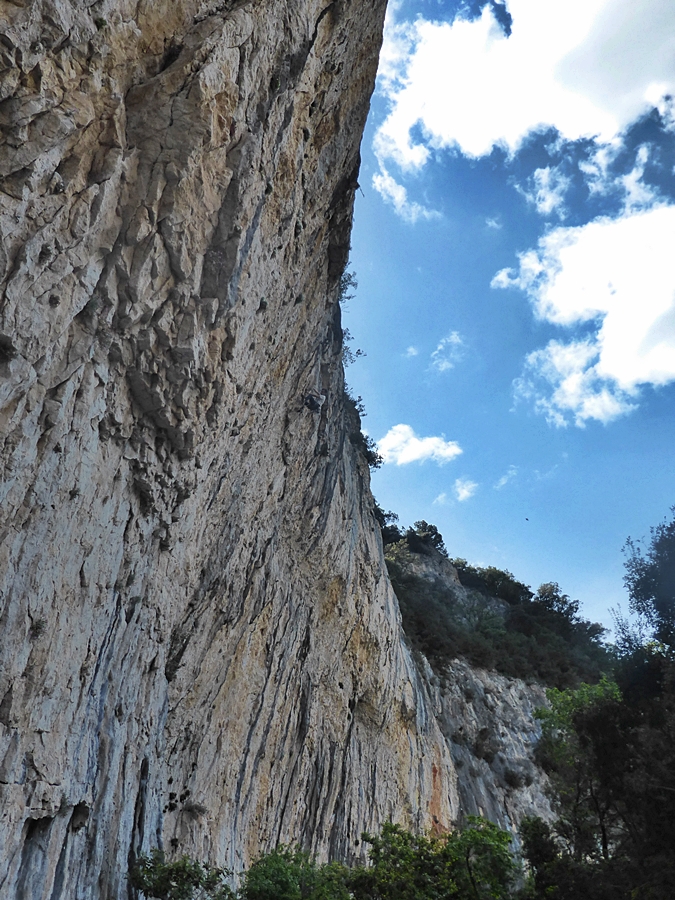 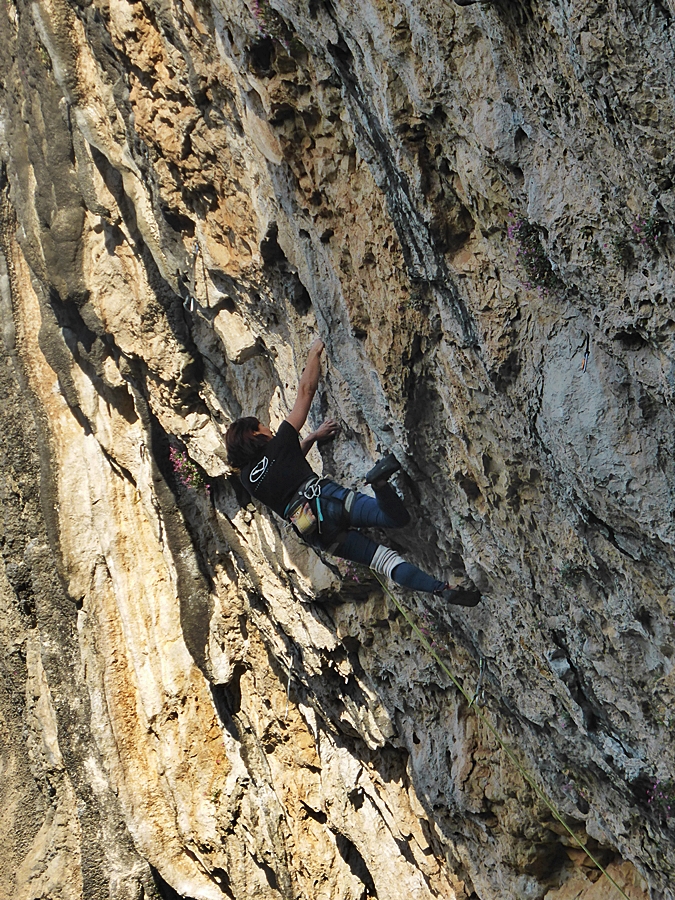 Chie, also from Japan, on the classic 8a, La Deva. 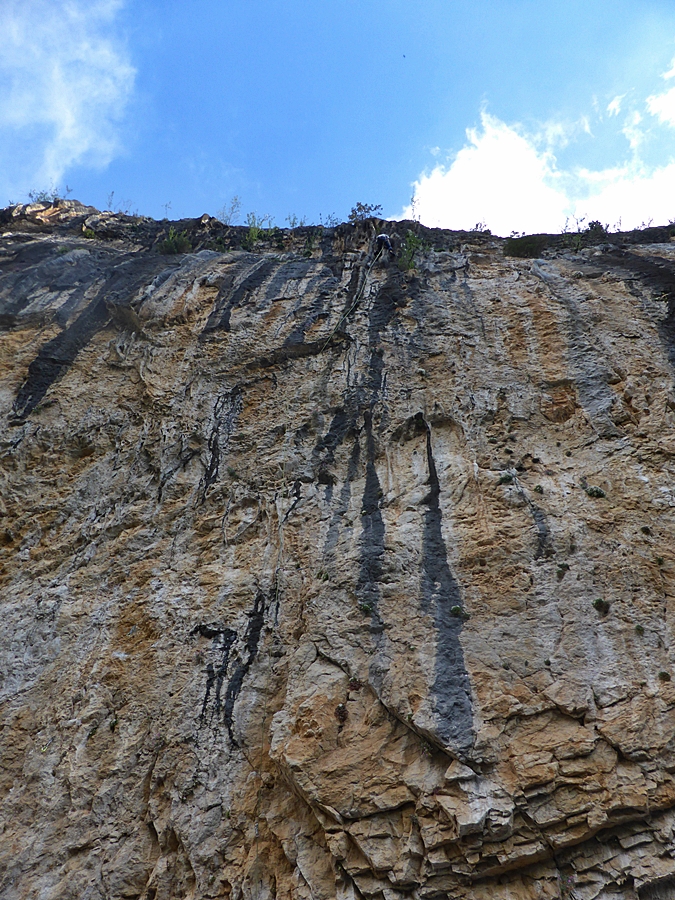 Toshi, Attacks the Fat One, 8a. 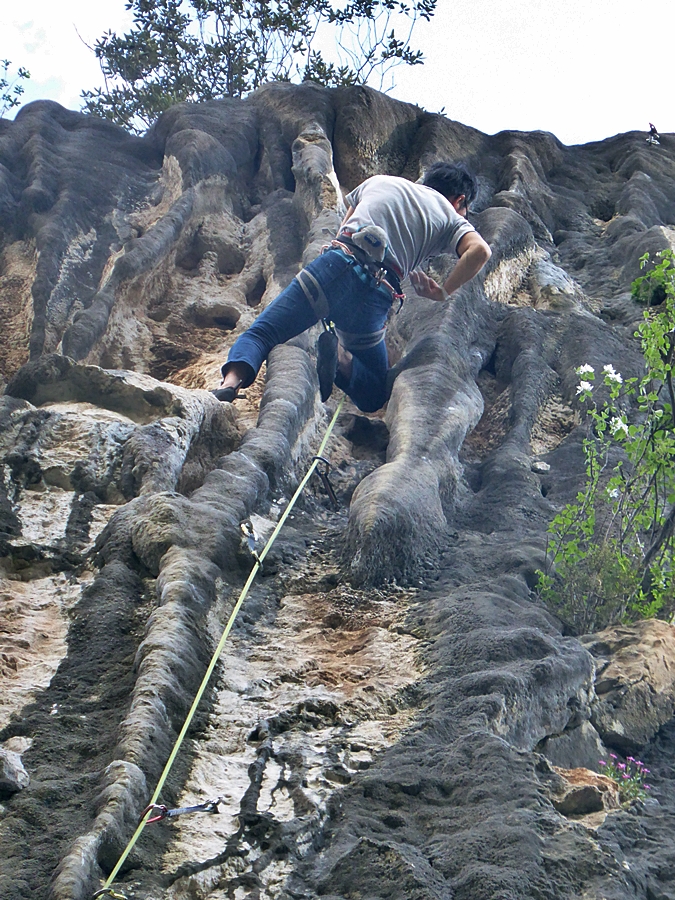 Toshi on the large tufa’s of Attack the Fat One.

One Response to The upper hand.