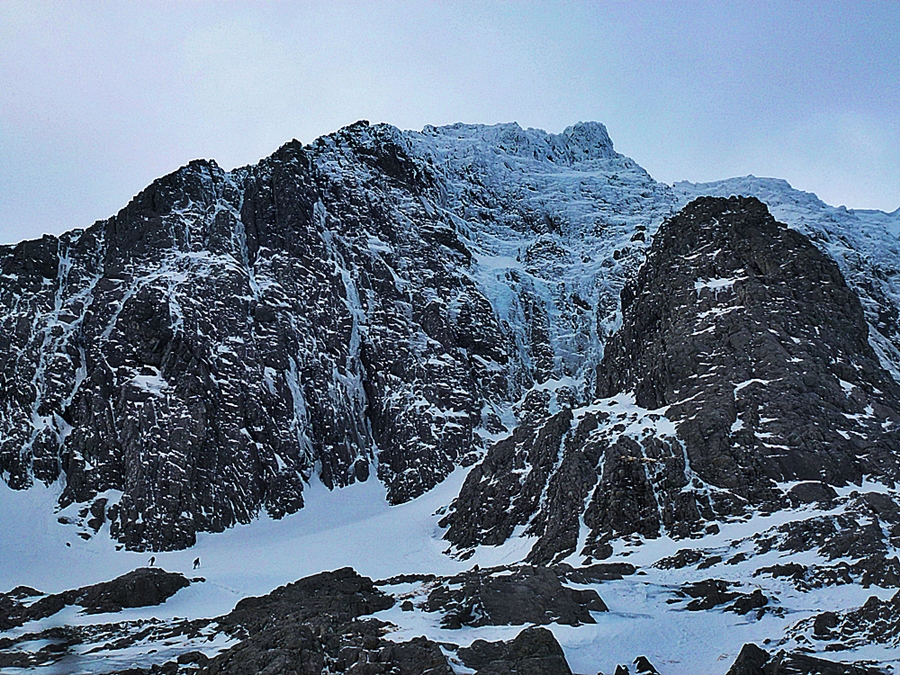 Lockdown has the occasional advantage over usual life (not many), but one is the lack of guilt and concern about the time I sit on the sofa staring at the computer screen. Trawling my documents, it’s odd going back to a piece of writing from long ago. It’s even more strange going back to an experience from long ago.

I don’t remember when I first wrote Footsteps, a piece that has just been published on the Mountain Equipment site, but it wasn’t immediately or even close to being after my solo of the Orion Direct on Ben Nevis, because the climb would have taken place in the winter of 95/96 (possibly), and I didn’t start writing until 2000. Twenty-four, or twenty-five years on, I still remember the experience vividly, especially going off-route and climbing the groove near the top of the climb. At that time, climbing the Orion Direct was a big thing for me, and given the poor conditions, it turned into an even bigger thing. It was the final climb of that winter season, I didn’t need to do any more after this experience.

Its crazy how experience, appreciation, gear improvements and conditions can turn something on the limit, to something reasonable. Several years (possibly ten or twelve, maybe more) after my first time climbing the Orion Direct, I walked again, on my own to the Ben. It was late March, birds in the bushes were bouncing around and singing, and the bushes themselves threatened to bounce into life. The weather and conditions were perfect – hard frost, hard ground, blue ice, blue sky. I soloed Point 5, then The Orion Direct and finally Zero Gully, before returning to the valley for a late lunch. Like the first time I climbed The Orion Direct, this was also the last climbing of the winter season, because not only was I keen to begin the rock season, but after climbing these three great climbs in a morning, I wasn’t sure I wanted to do anything else in Scotland that winter, how could I better this experience? For many years I had held onto the dream that one day I may solo these three climbs on the same day and now I’d done it, it was another of life’s dreams realized.

We’re lucky as climbers that in times like this (pandemic lockdown) we can look back and remember, and after re-editing the piece about my first time soloing The Orion Direct, I feel especially lucky to still be around to remember!

The newly edited and quite raw version of Footsteps, which was published in Echoes as the chapter called Honesty, can be read on the Mountain Equipment site here