Out on a limb… 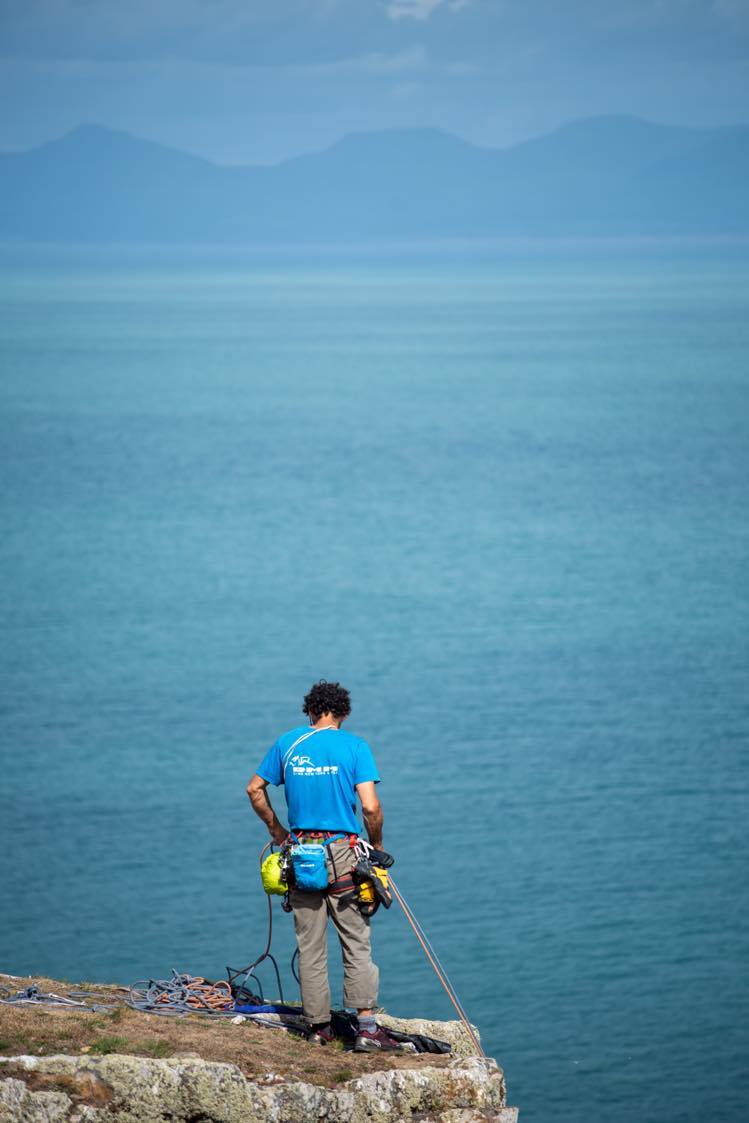 I’m not sure where to start this piece, or where to finish. Shall I go with a stream of consciousness, or slow and studious? Can I be bothered at all? Writing my pointless drivel hardly seems worthwhile with so much going on in the world. The loss of hundreds of thousands of lives and livelihoods destroyed or put on hold. The murder of George Floyd and the riots that followed. The unbelievable hypocritical arrogance, madness and lies coming from Donald Trump, Bolsonaro, and ‘I-shake-hands-with-everybody’ Boris Johnson. And before I get off my wobbly stool, how about the arrogance of Dominic Cummings and Boris Johnson’s refusal to sack him. If we ever needed an example of Johnson’s haughty belief that he, and his cohorts are more entitled than the rest of us, that was it.

While I’m on one, what about the whole global warming, deforestation, consumerization, exploitation, globalization, that of course is still happening and getting worse and has certainly had a big part to play in the pandemic. The year 2020 is just over halfway, and its already given us so much, thank you world, maybe we have asked for much of it, but if you can, please spare a thought for the caring and considerate people out there.

Given everything that has happened, and is still happening with the pandemic, I wanted to learn as much as possible, and for two months I did; I read, listened, watched – day in, day out, most of the day, but in another way, it all felt, and still feels too big for me to make a difference, and after hitting pandemic burnout, (at about the nine-week point) sticking my head in the sand felt more healthy than banging it against the wall. So, I sit here thinking about writing, about climbing, and it all seems pretty pointless and insignificant and selfish. But, on saying this, and truly believing it, climbing is also something I get a lot of joy and satisfaction, especially when I become a bit OCD about an area, or a crag and all of its foibles. A crag I’ve had a special relationship with for a long time is Craig Doris on the Llyn Peninsular and given everything happening, Doris, in some way, is quite fitting because its pretty wild and crazy, (although always honest) there are generally no other climbers, or people near the crag at all, so socially distancing is easy, and many of the holds are one-use-only, so cross-contamination is never going to happen. 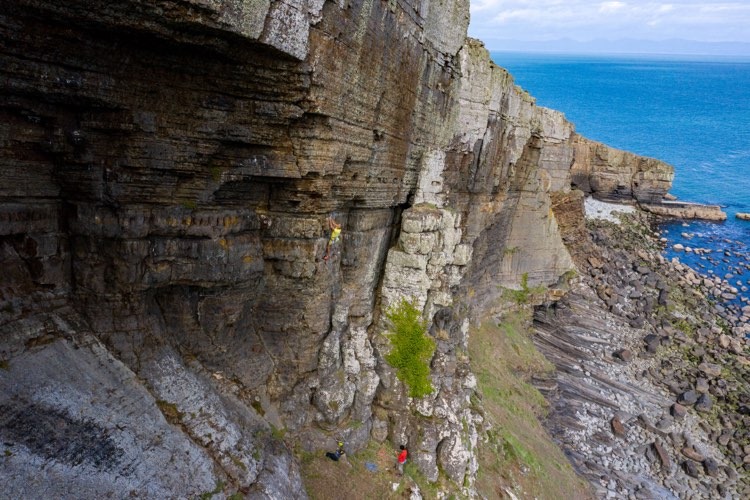 Now, as I’ve obviously gone with the stream of consciousness and I’ve already explained I’m a selfish climber and this is my blog that no-one has forced you to read, did I mention my shoulder injury? No… OK, well, for the first time in twenty-five years I’ve injured my shoulder, and to be honest, it’s a bit of a bastard. I blame my injury on the pandemic and my stupid personality. Train, train, train… it was so obvious I was going to become injured, because for me, (and I stress, for me) the correct thing to do, given the thousands of folk dying and in trouble, (and because at the time no-one had a handle on what was the correct way to tackle the virus) was to completely adhere to the advice to separate myself. I certainly didn’t want to encourage others to go out climbing, not going out and not been seen climbing felt morally correct. I know some people think this is a misguided form of solidarity with people in a less fortunate situation than myself, but if we don’t support people with less than ourselves, what does that say about us and how will change happen? I was also told to get a grip when I said I thought we should hold fire on climbing, as thousands could soon be dying. I wonder if I still need to get a grip, figures today from Johns Hopkins are thirteen million Covid-19 cases and five hundred and seventy-one thousand Covid-19 related deaths?  Taking to the fingerboard was the correct way for me, all in all, it was a bit of climbing I was missing, and as painful as this felt, it’s a bit of climbing. So, in about sixty plus days of lockdown, I completed thirty weighted fingerboard sessions, which, given the age of my shoulders, and the fact I only usually fingerboard twice a week through winter, this was always going to have an effect, but of course, because this is 2020, the year everything is messed up, it wasn’t the desired effect! Day two out of lockdown and in a quarry where I would never usually be climbing unless it was with a set of axes, I was slithering around in a groove when I heard and felt my shoulder explode, deep joy! There was no way out from the climb other than to climb, so, with much gnashing of teeth, that’s what I did, and all the dentists were closed at the time, so this wasn’t good either. Anyway, two months down the line, I’m still being kept awake with pain and it looks like I’ve either torn the rotator cuff tendons or the shoulder labrum. But the force is strong (or is it that I’m a sad, addicted climber?) and after much ringing around and chatting to friends who have had similar injuries, I’ve continued to climb; albeit cautiously, with the occasional near vomiting with pain episode. 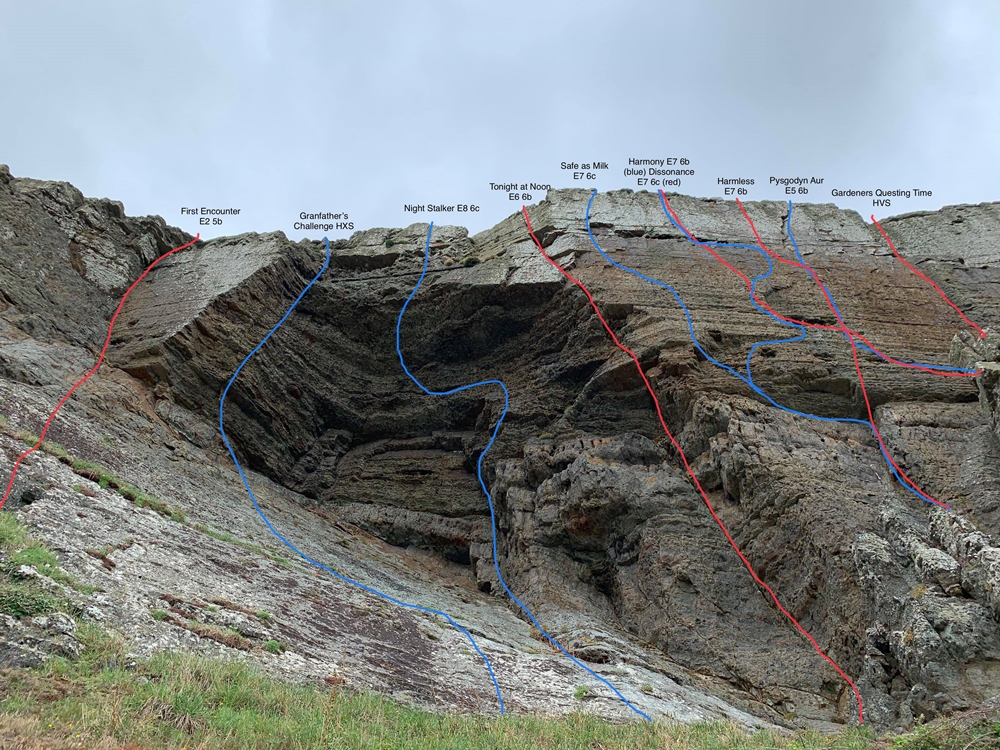 A section of Craig Doris I have hardly bothered with apart from one climb, Tonight at Noon, is the far-left hand section. This left section always felt a little like Doris lite, as in, it’s reasonably short, thirty metres over-all, but about ten metres of this is scrambling, and it just doesn’t cut it in comparison to the forty metres of Stigmata. There is of course the very overhanging cave, but this has never interested me, and I’ve always been drawn to the other, longer, more exciting sections. The wall to the right of the cave is attractive, no doubting, but it’s up high and above a load of chossy pinnacles, it just didn’t appeal. But all sorts of things start looking good in a pandemic (even a quarry), and after taking a close look, it quickly became apparent the wall was, in-fact, a thing of reasonably solid and pocketed beauty.

So, over the last few weeks, I’ve been meeting my old Doris partner in crime (no, not the Hippy, not that old!) Mick Lovatt, and we’ve been climbing a few things on the section of crag to the right of the big cave, it’s been the perfect antidote to everything going on in the rest of the world and it’s helped my shoulder recovery, or at least that’s what I tell myself. It’s also been a real tonic to be away from the internet, sat on a deserted headland watching the gannets and dolphins who appear to be enjoying the lack of jet skis. 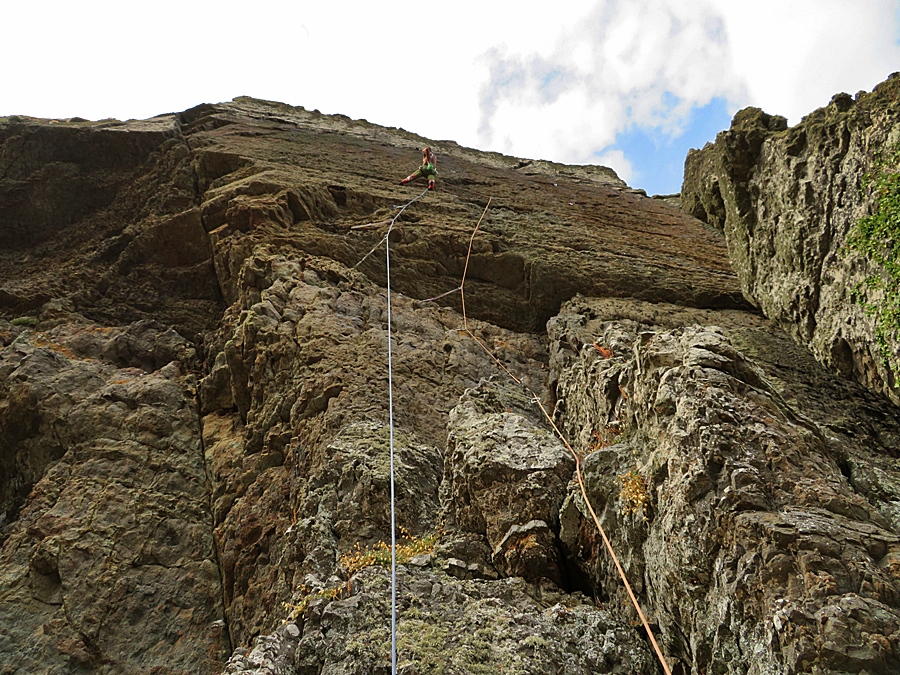 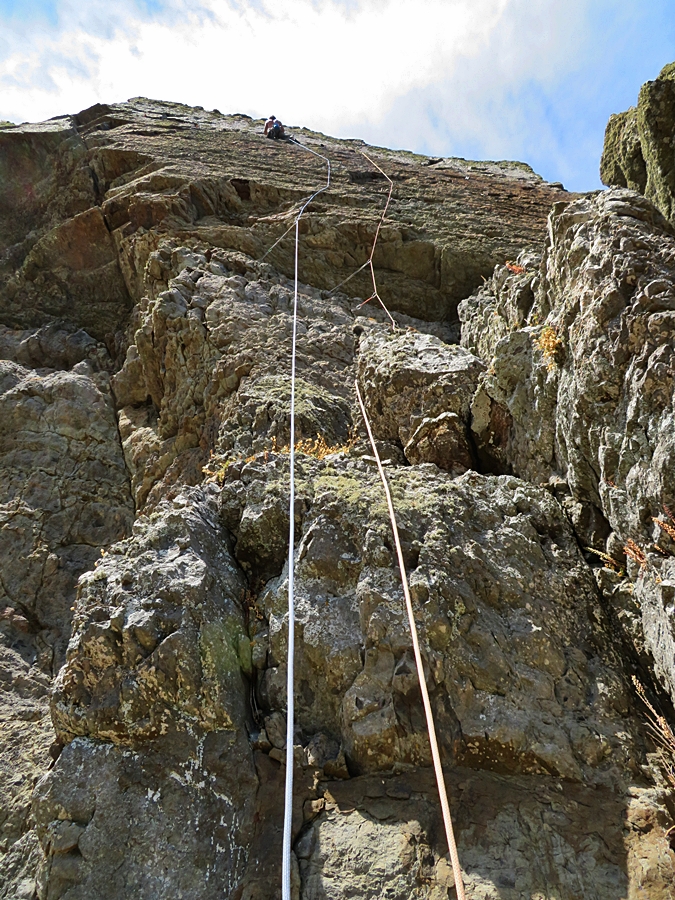 Myself climbing Harmony. I took a lob from the crux first go, it’s about as big a fall as you can take, but the gear’s good and the fall-out zone safe. 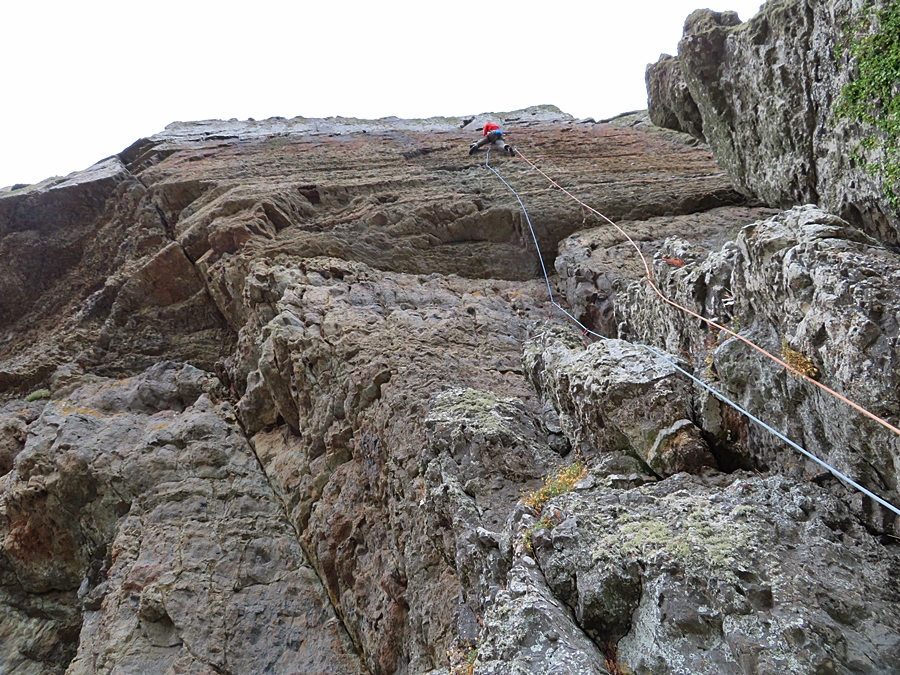 Myself on the first ascent of Harmless, E7 6b. It stars as for Harmony but goes straight up the wall into the crux of Harmony and direct up the top headwall. 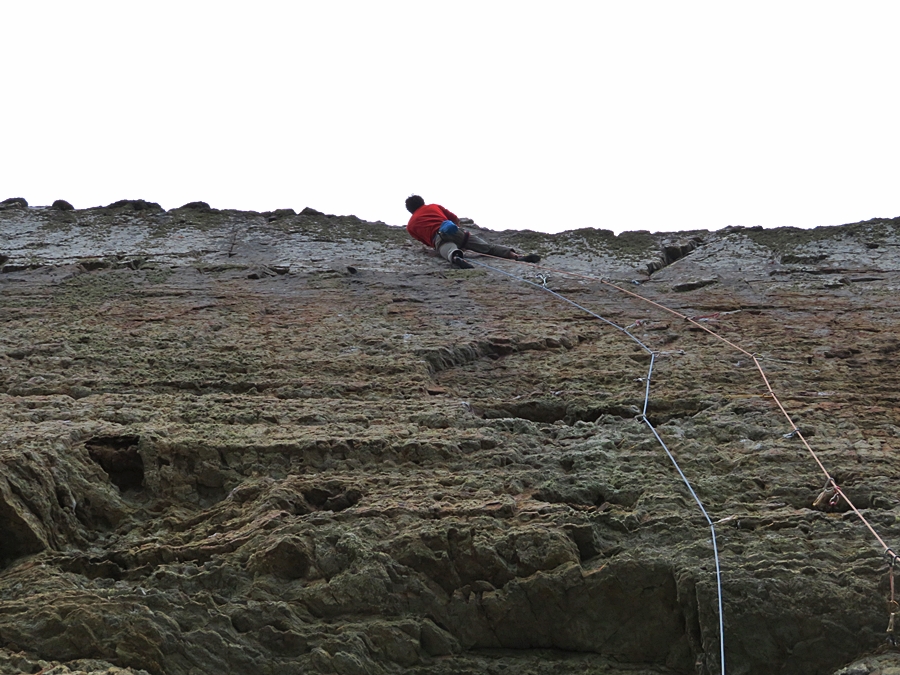 The final section of Harmless. The small groove to the right is Pysgodyn Aur, E5 6b, and the thin crack to the left is the finish to Harmony. Pysgodyn Aur starts from the top of the flat ledge (can be seen in the picture below) after a scramble and a bit of chimney. Its good climbing, but the pegs that protect much of the climbing are not bomber. On another day I climbed the new Harmless start and finished as for Pysgodyn Aur, it’s a good link up at the same grade and less faff with ropes. 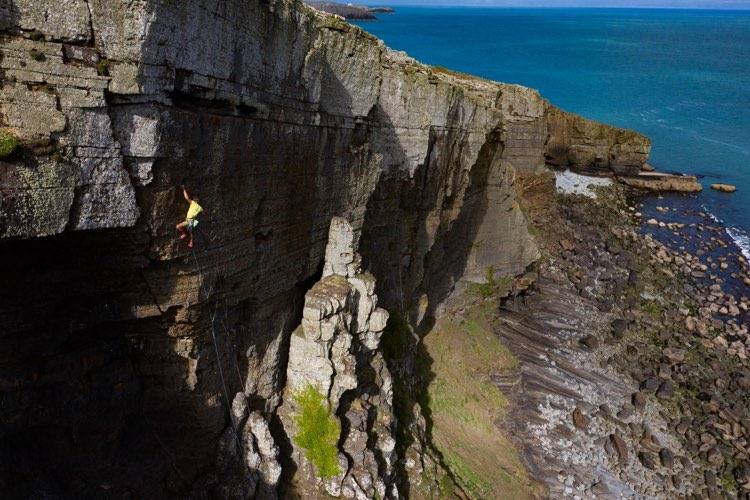 TPM on the first ascent of Safe as Milk, E7 6c. Terrible name, and possibly a tad over graded at 6c, Mick must have forgotten to take the Sanatogen, (other old age supplements available) or maybe I’m on fire, but a brilliant climb, possibly the best on this section alongside Tonight at Noon. Pic credit, Jethro Kiernan. 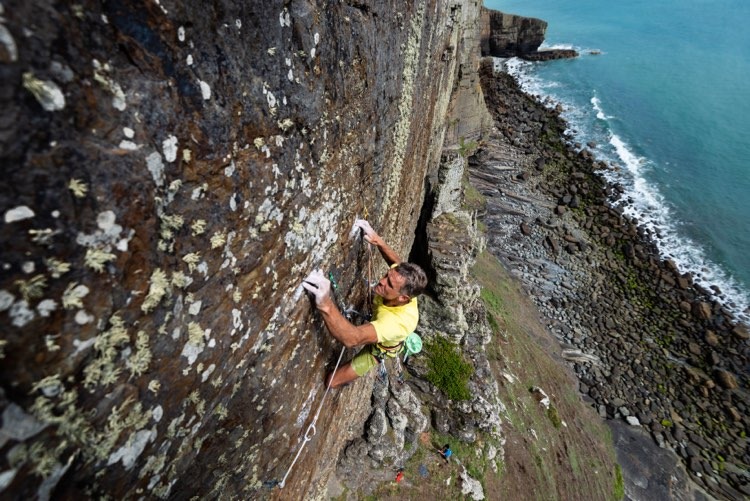 TPM just before the crux moves of Safe as Milk. Jethro Kiernan. 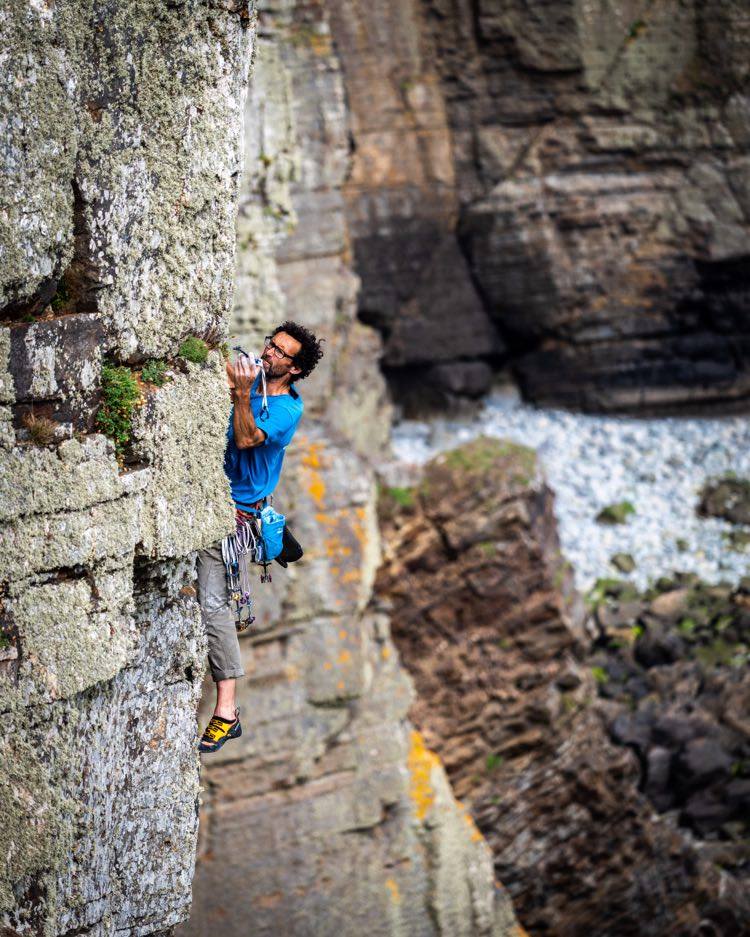 Myself seconding the first ascent of Safe as Milk. Jethro Kiernan. 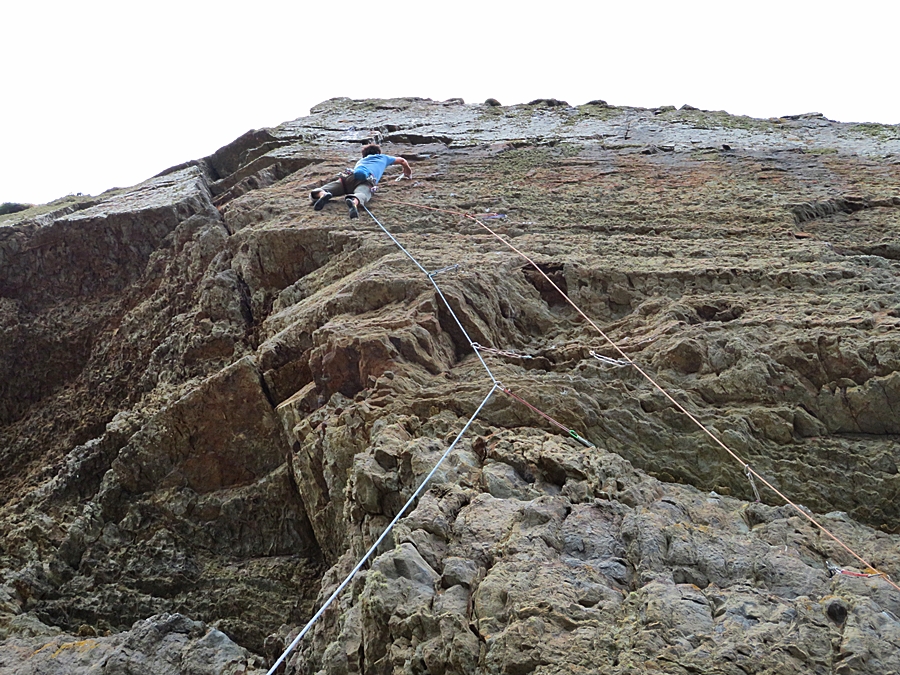 Another day. Myself on the second ascent of Safe as Milk. 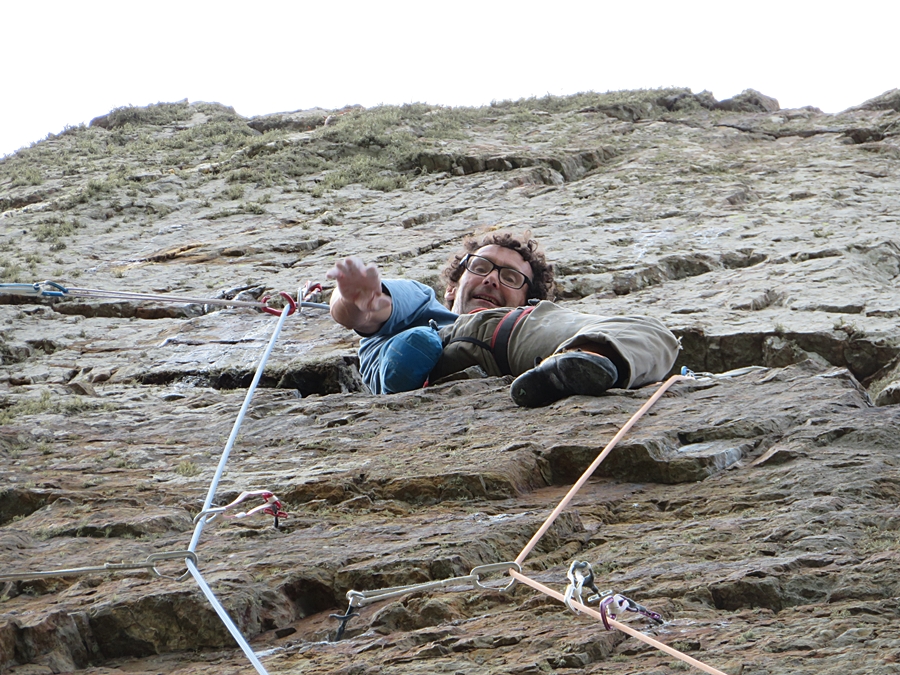 All the best routes (or at least the ones I manage to climb) have a sit down. Safe as Milk before the headwall. 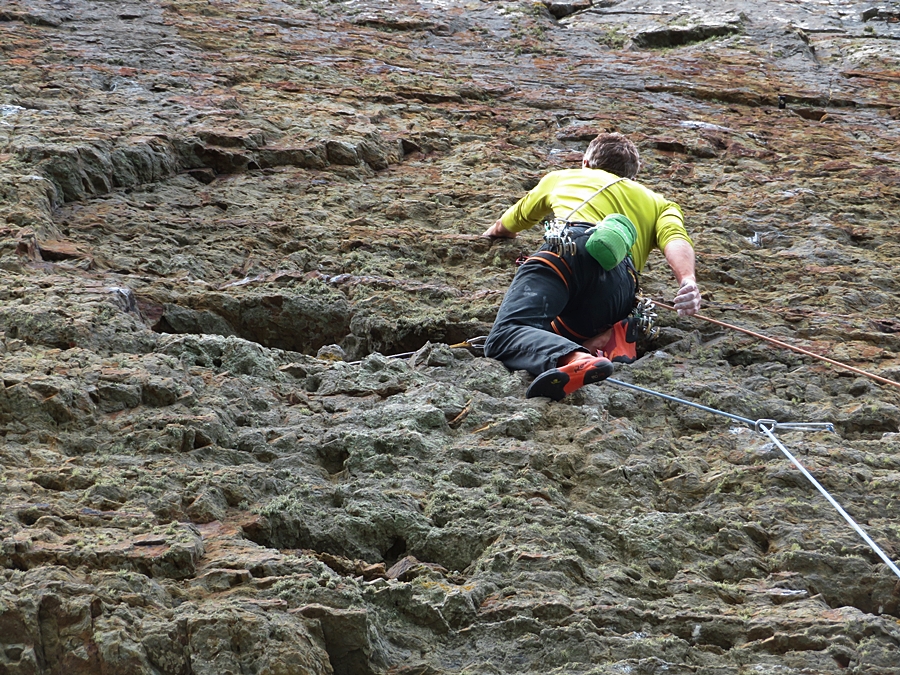 TPM bringing Rodella knee bar skills to Doris on the (possible, but happy to change this if its incorrect) second ascent of Dissonance, an E7 6c first climbed by the, not-so-young-any-more, wunderkind, Calum Muskett. It starts from the flat top of the pinnacles, as for the original Pysgodyn Aur, then traverses left into Harmony, which it climbs to the group of pockets, before a few hard moves and the final crack of Harmony. 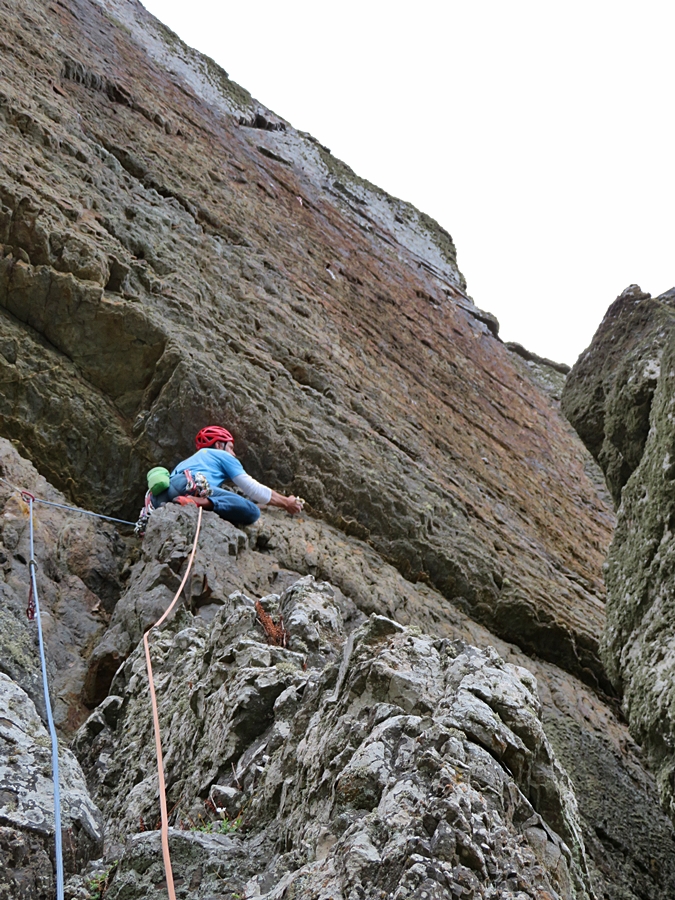 TPM gets the second ascent of Harmless. 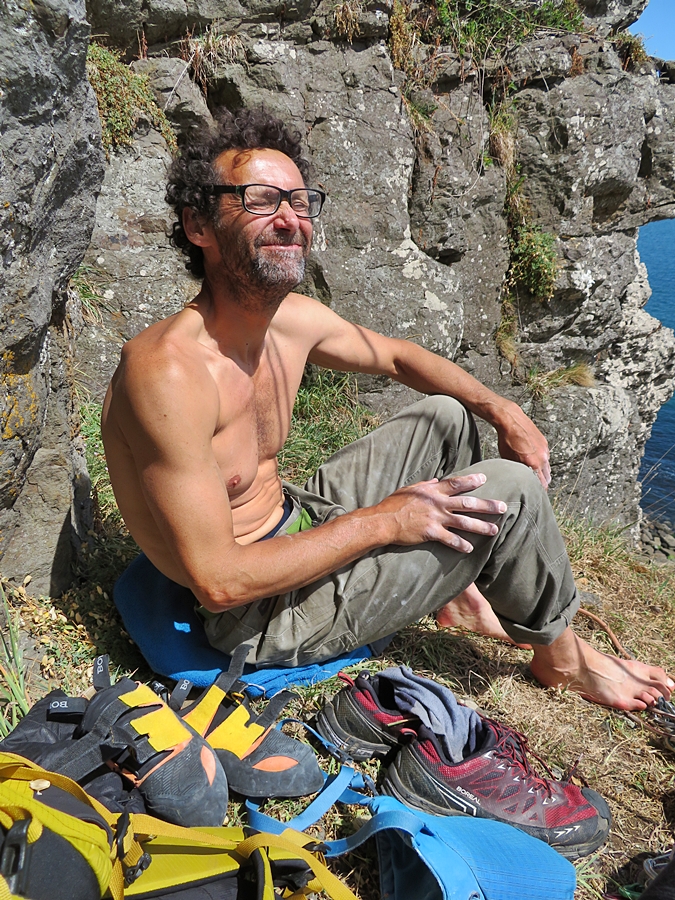 My withered right shoulder and lockdown hair and beard, (although my hair looks like this lockdown or not!) but happy to be in the sun and away from the internet. Pic credit, Zylo.

2 Responses to Out on a limb…