A unique shot of the whole of Craig Doris taken by Jethro Kiernan via drone.

I’ve been fortunate to have climbed a reasonable amount, (given all that’s going on in the world, and my shoulder) over the last weeks, but I’ve only climbed at three crags; Craig Doris, Craig y Forwyn and Rhoscolyn. I’ve avoided the Llanberis Pass and other crags that are generally busy, not wanting to have the weirdness of interaction – who steps where, how do I pass this person, don’t shake hands, don’t hug! I’ve mainly climbed at Craig Doris, with a couple of trips to Forwyn and one to Rhoscolyn. Rhoscolyn was the busiest, but it was still relatively peaceful.

I’ve read lockdown accounts from folk saying they enjoyed the isolation and quiet, personally I just got on with it because it was a necessary evil, although now that the roads are busy once again, I must admit, I do miss the peace and quiet and the clear air. I miss the hard edge to the hills that usually only happens when there is a Northerly air flow. Until lockdown, I never really appreciated the blast of noise and the mini hurricane caused by vehicles. Until lockdown, I didn’t appreciate the necessity for drivers to reach their destinations at breakneck, but here we are again, vehicles driven by tight-lipped and frowning; cyclists and other road users lives risked by impatient drivers crossing solid white lines on blind bends.

Craig Doris is always a sanctuary, a rickety, rubble strewn recluse, an oddity stuck on a windswept peninsular. The gulls, fulmars, ravens, stonechats, kestrels, pippets, skylarks, buzzards, choughs, they all frequent the headland, I find their cries and song evocative. It’s mesmerizing sitting and watching the fulmars, wings set, skimming the cliff at the same height as my feet that dangle over the edge. Charms of goldfinches raid the thistle heads on the bank beneath the crag and large field mushrooms look like moons glowing through the long grass. Out at sea, out into the yawning mouth of Cardigan Bay, above the waves with their white caps, gannets, oystercatchers, and cormorants cruise and call, and beneath the waves, most days at 4pm on the dot, a pod of dolphins pass, its like they have an understanding of time. Mick Lovatt and I look forward to watching the dolphins, the pod is eight or nine strong, adults and calves. We generally stop whatever we are doing and watch them. Mick sometimes ruffles his rucksack to find binoculars and gives me a commentary. Occasionally an adult breaches the water and the slapping noise on re-entry alerts us to their presence. They hunt fish causing a flush of blue bubbles and alert the birds to a possible bonanza. But eventually they pass and swim out of sight, going to where ever it is they go. There is always a gap in conversation, a time for quiet reflection after they pass. I know nothing about dolphins, I’m just another ignorant punter who finds charismatic megafauna a joy.

Lockdown for the time being is over here in Wales and visitors can once again travel freely. I’ve read some people complaining about the influx of people, which in a way I understand, but I also see the benefits for a family or individuals needing to take a break from the usual in this crazy year, we all need a break! Who has the right to say, no you can’t leave your area and travel to the countryside or a beautiful place, let’s face it, most climbers are tourists and the financial benefits for the local community is helpful and needed?

Mick and I walked to Doris on a Sunday, the first Sunday since lockdown had finished, it was eleven am when we stood on the top of the crag. There were several boats in the bay, the first we had seen for a while, but they were anchored and the people inside reasonably quiet. But, as we prepared to climb, the first of the jet skis appeared, followed by others, their high pitch revving engines and bump, bump, bump as they hit waves, jumped, hit waves. As the day passed, more and more jet skis, some had loud music. The call of the birds was now engulfed by engine noise and bumping beats. The gannets were nowhere to be seen. At four pm, the doughnut spinning madness happening just out to sea had reached a new level of revving-screaming-fervour. I sat on top of the crag willing the dolphins to stay away, but right on cue, the pod appeared. They took their usual course, on occasion breaking the surface, dark glinting skin, a blow of air, but they were separated by jet skis cutting through the middle of the pod. Two dolphins turned back to swim in the direction they came, the rest continued their usual path. After several minutes, the larger group of dolphins had a boat and a flotilla of jet skis following, just metres away, and the two separated dolphins swam in circles some way behind. Having heard nothing, but the sound of revving engines and music all day, I watched the dolphins being disturbed, and longed for lockdown again. After everything people had experienced over the last few months, I hoped we may have had a deeper understanding and consideration for wildlife and other people, but in some way, for some, it appeared the opposite, now it appears to be a smash and grab, ignore everything and everyone else, get it while you can before the ‘good times’ are gone. 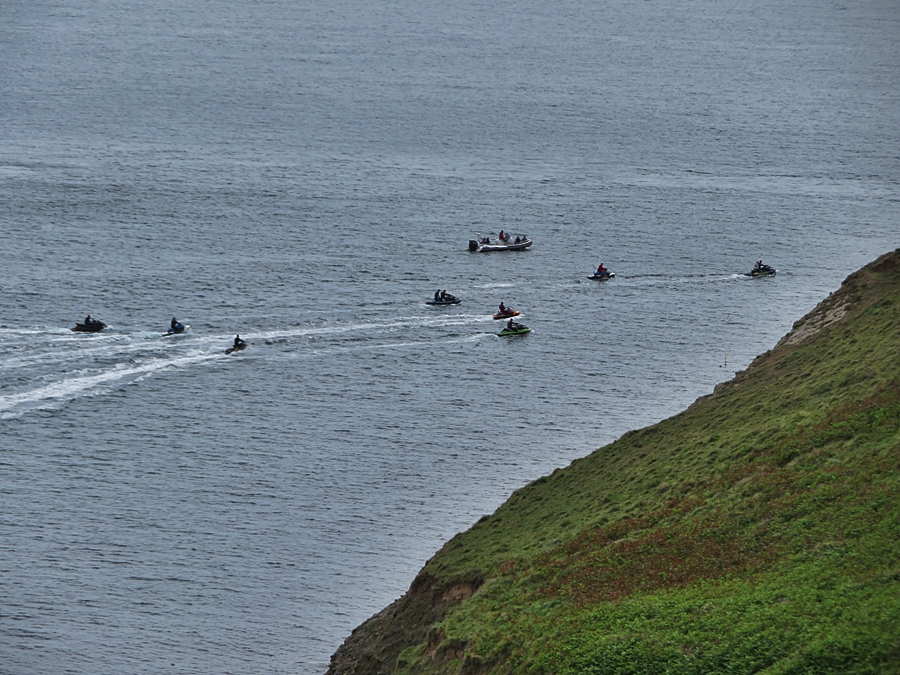 The flotilla closely following and disturbing the dolphins. 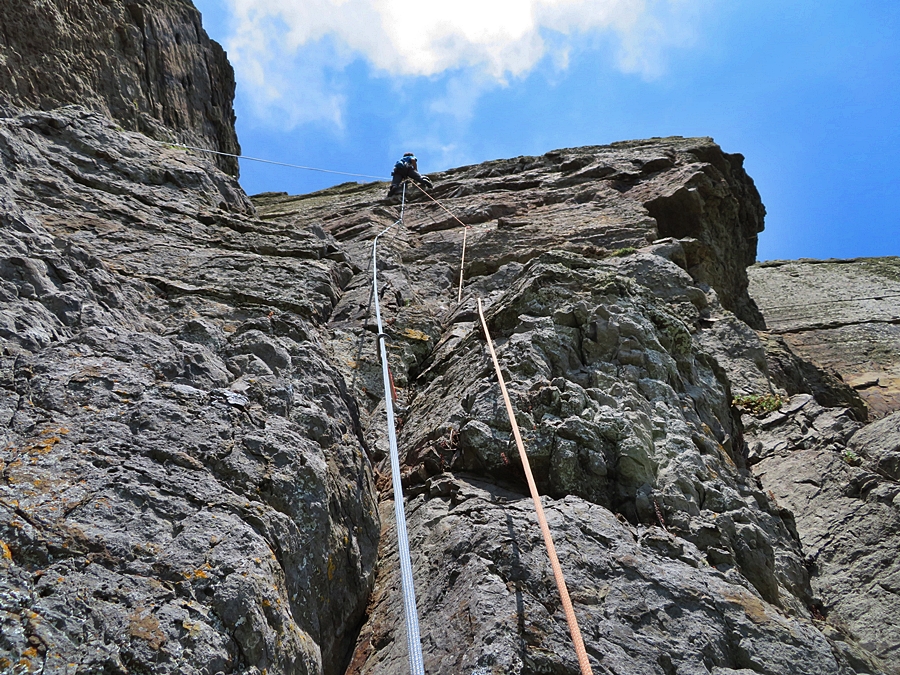 Myself climbing the new route Sold Under Sin E4 5c, on the clean white wall, high above the boulders and grass ledges, between the pinnacles at the start of Pysgodyn Aur, and the crazy overhanging crack (with a massive, vacated nest at its base) of Chosstokovitch. Pic credit, Mick Lovatt. 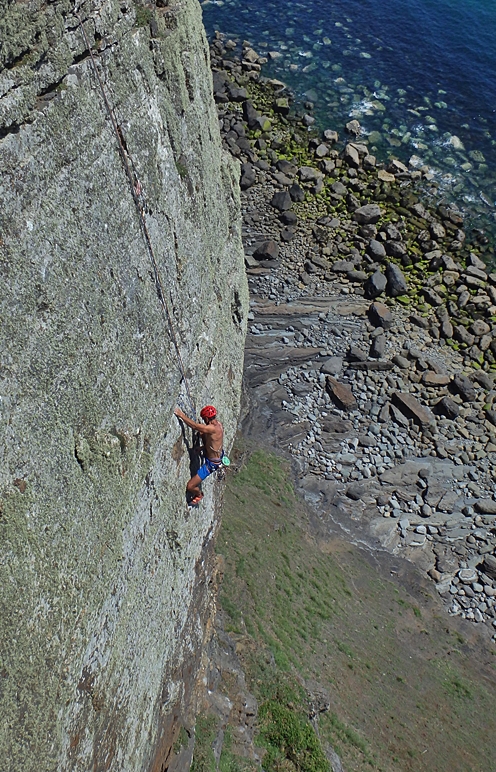 Mick Lovatt seconding the first ascent of Sold Under Sin.
Start from the biggest and lowest, ivy covered ledge at a small groove, on the right of the ledge, beneath the crack in the final headwall. Peg and good cam for belay.
Follow easy grooves and corners, up and left, (with increasingly better gear) until a small ledge beneath an overhanging red wall that has an obvious flake-crack. Climb the flake crack, step right, then a series of good, but bold moves to reach two solid flat holds on the left (crux) where a peg can be clipped (if tied off). A couple more tricky moves follow to reach the base of the finger crack. Follow the crack to the top. 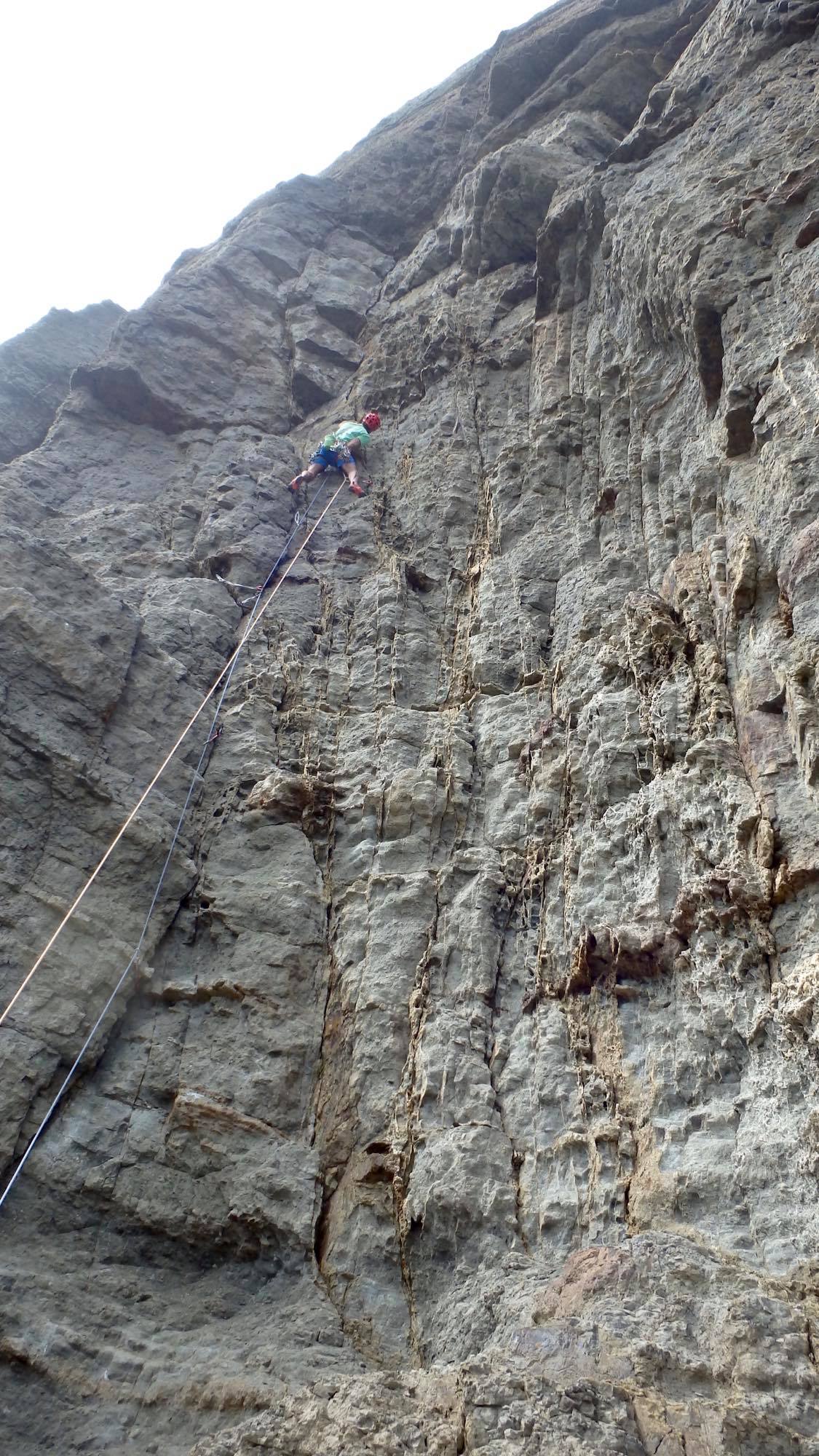 Mick climbs Box of Blood, E7 6b, a memorable route, first climbed by Leigh McGinley. The lower section is the first pitch of an E5 called Crucial Condition, NOT Doris lite! 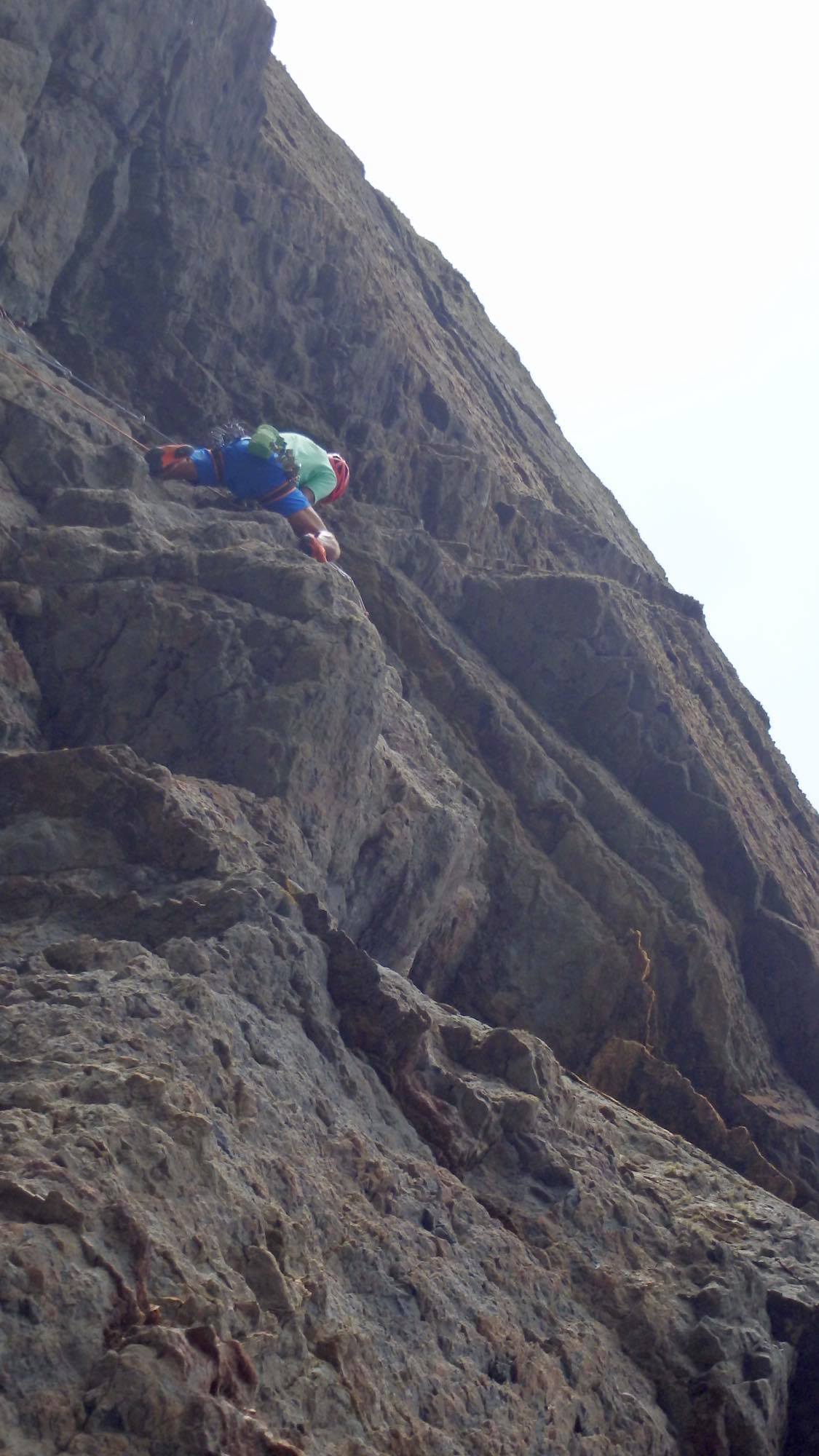 Mick leaves Crucial condition to get good gear before some, eyes on stalks, overhanging, unprotected groove climbing. Mick did a great job climbing Box of Blood with minimal practice and pre-inspection. 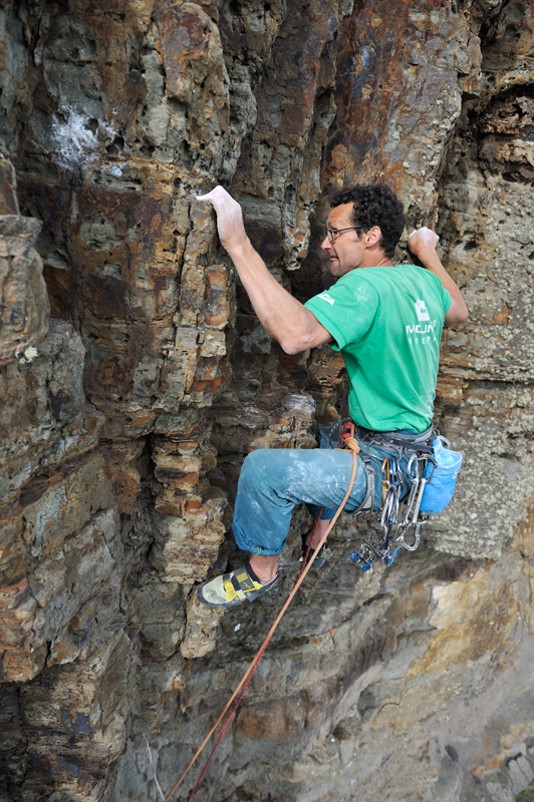 A Ray Wood shot of my ascent of Box of Blood from several years ago. This is the overhanging groove above the position where Mick is, in the picture above.

2 Responses to Smash and grab.