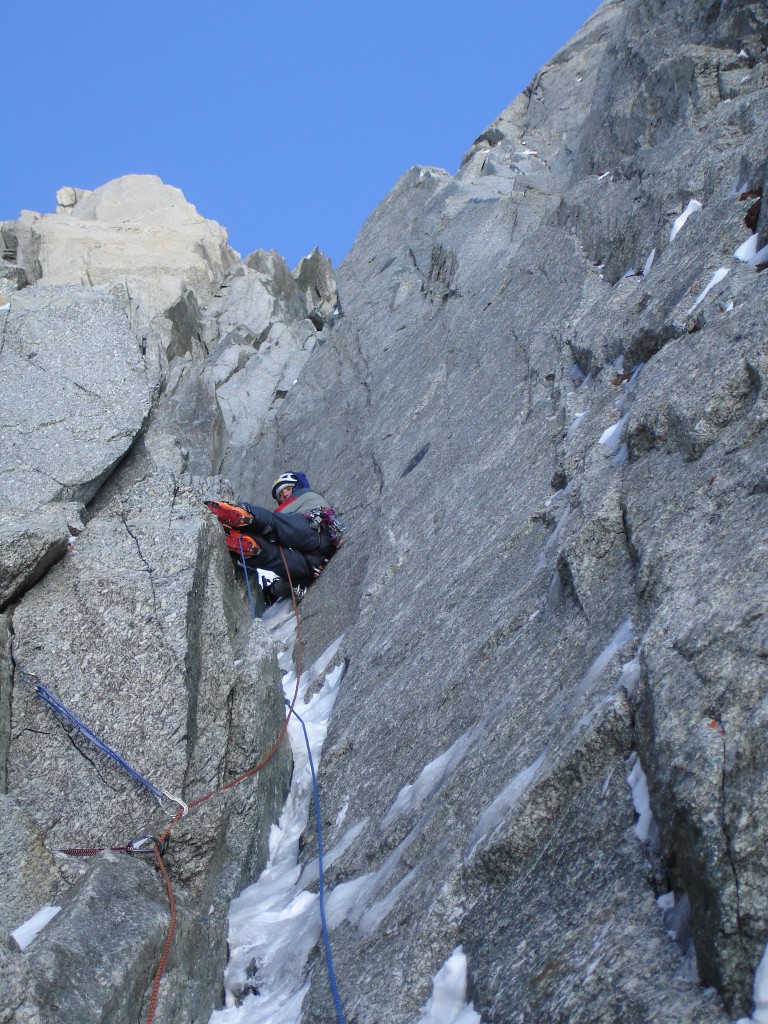 “Don’t be a slacker Bullock”

Bracey shamed me into action, the day before we had climbed Scotch on the Rocks skiing from the first telepherique and catching the last. I was quite tired, and here we were stamping into ski bindings on the wind-blow col beneath the Midi Arête, about to ski in and try a line we spotted yesterday.

Bracey stomped a track until we stood beneath the intended line. A clean slash through perfect pink Chamonix granite. A slither of ice, thick at the base and thinning to a dribble at the back of the corner looking like THE pitch of Beyond Good and Evil, led to a slab. The slab was topped with a turret of large blocks and the final spire to the summit of Point Lachenal

Pitch 1. 20m. Crossing the bergschrund the snow cone was climbed until I took a belay beneath the entrance of the corner/runnel.

Pitch 2. 30m. 75º. Scottish 6. Bracey led off. Perfect squeaky ice glued to the back of the cleft. Jagged blocks overhung on the left, a steep wall of cracks and folds ran parallel on his right like corrugated cardboard.

“What’s that sticking out of that crack, it’s not a peg is it?

Pitch 3. 30m. 80º. Scottish 7. The angle increases, hemmed in, the overhanging wall on the left gives the odd good foot-hold, unlike the smooth slab on the right. Thin ice dribbling at the rear of the corner, just enough to tap a placement gives me the confidence to continue and the confidence to swing both feet underneath and into the fold and layback with vengeance.

Pitch 4. 30m. 90º. Scottish 7. Leaving the belay, passing a constriction, Bracey uses picks torqued behind expanding ears of granite until he crashes a placement at arms reach. A delicate rock-over trusting to the same moving flakes that was used before, allows entry to the continuation corner above. Deep cracks give security. Twisting picks, laybacking, stepping high, until an airy step right gives a perfect platform at the base of a slab.

The options; an arcing, overhanging corner cuts into the rock-face and gives the true line, but as much as we would like to give it a go, it is suspected that an aid-fest will be the only way, neither of us fancy that. Time is ticking, and with no bivvy kit the steep slab with shallow seams and the occasional good foot hold looks to be the best bet.

Pitch 5. 20m. Scottish 6. Leading off into the unknown knowing that these things can end in tears, aiming for a ledge on the right arête of the slab, I scratch out the odd poor cam and nut placement. A high rock-over, mantling, care, controlled breathing, and frozen tufts of moss help. Higher. A good nut and a peg allow a delicate move right. Crampon front points skitter and scrape, the ledge on the arête half way up the slab is reached. Unfortunately there is no easy passage around the corner.

Pitch 6. 30m. Scottish 6. Tenuous moves, front points balanced, laying away from the twisted single tooth of a pick placed into a shallow seam, Bracey gets going. Crossing left into the middle of the slab and then back right he’s on a roll now.

I hope my shout doesn’t show the relief I feel with the speed of Bracey’s lead. The cold night out, or more realistically the abseil off, was something I didn’t want to contemplate. At the top of the slab a broken groove, spikes welded with ice, hooks and torques all give the necessary boost.

Pitch 7. 40m. Scottish 5. Large blocks, overhanging offwidth, a touch of rubble and snow. Right, then left following the line of least resistance, aiming for the crest of Point Lachenal.

Pitch 8 30m. Scottish 5. Similar ground as the pitch before takes Bracey to a fine belay, sat in a key-hole right on the crest of the ridge.

Pitch 9. 30m. Scottish 6. Torquing, laybacking, swearing. Its dark now, it hinders, and I nearly fall. Spindrift stings as the snow is whipped from the top of the platform I crawl thankfully onto. Adrenalin helps as an offwidth is shimmied. I stop and belay, my head-torch is at the bottom of our one empty rucksack. Bracey joins me and shivers his way, pulling the top of Point Lachenal in the dark. The chilling wind whistles but I still hear a whoop of joy telling me that we had made it.