An Account of climbing the new route, Fear and Loathing with Al Powell, on the Southeast Face of Jirishanca, Huayhuash region, Peru. 2003. This account was published in Vertical Magazine. 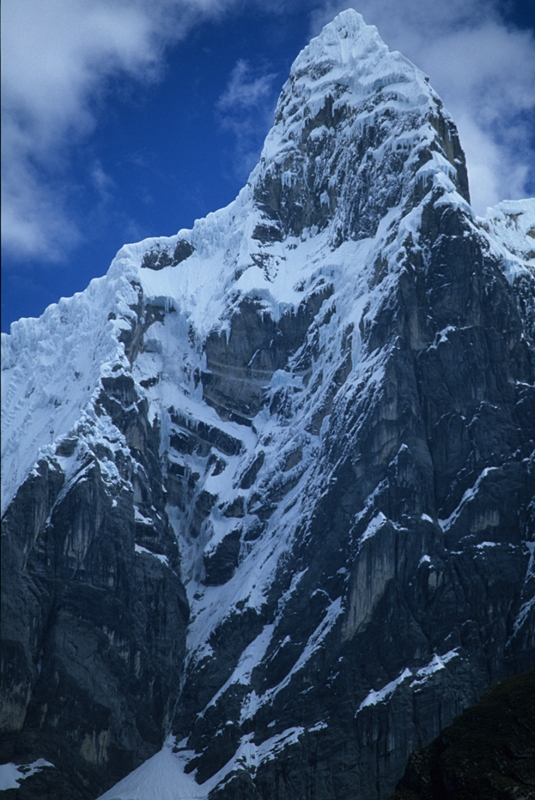 It was one in the morning and I felt terrible. Kicking the squeaky nèvè of the snow cone, I well remembered the chimney that was approaching quick. The mountain whispered, the voice inside my head screamed… ‘Turn around’. My breathing grew laboured. Was it the altitude or was it psyching up in preparation for the sprint ahead. Entering into the confines of the chimney, the drain for the whole of Jirishanca’s massive Southeast Face, the place I nearly died in 2002, I replayed being plucked and thrown. Twisting, smashing-crying out for the end, blacking out for a second, then waking and realising I was still falling.

The sense of menace was overpowering, I desperately wanted to escape the clutches of the place that haunted me, but it took an age until the chimney opened and the large overhanging buttress to the right was reached. Silhouetted in the eerie light of the moon, I sensed the massive gargoyles of snow and ice stuck to the soaring tower above.

Where was Powell? We had decided to solo for speed which in this place meant safety. I turned to look below and saw a pin-prick of light. Al was still in the confines, plugging away as quick as his body would allow. Our partnership had started in Peru three years earlier. My inpatient, aggressive character was tempered by his steady, laid-back approach. We were in this together, gnarled and knotted like old oaks.

As the dawn arrived we clung to life in the middle of a great concave amphitheatre. Upside down organ pipes hung all around in this cold cathedral, some as thick as tree trunks. The mountains behind woke, illuminated with the deep red glow as the sun lifted above the horizon. Immediately the warmth made its presence felt. A large serac broke from the wall above, crashing and shattering. Minutes later a second one followed. With every resounding crash we cowered like insects in the bottom of an egg-timer.

I climbed toward Powell crossing runnels furrowed by falling debris. We were pitching the climbing now since the chance of something falling from above was very real.

After a sustained 60-metre pitch of vertical water ice I belayed and cast a wary eye above. A thin skin covered a runnel of rotten rock. A bulbous overhang of icicles protected the top. This was not the type of ground for someone new to the fathering game like Powell. My Lead.

Climbing direct, good ice gave way to a rotten crud. Frantically I scraped and scratched, eventually reaching the cluster of icicles drooling from the runnel exit. The screw I had placed an eternity ago was a mile away, with Powell belayed as far again. Placing three more screws into crud, with one tied off and two wobbling I made a move up, then another. Feet thrashed, lumps of crud flew. Powell dodged, I swore, an axe ripped. I lurched, reversed and tried twice more. Both attempts failed.

“Any ideas?” I yawped while swinging around trying to kill myself.

“On what, everything is rotten.”

“Just slap a sling on you’re top screw, stand in it, then aid it on your axes.”

The thought of aiding through rotten overhanging ice did not appeal.

After an hour Powell realised I wasn’t joking.

Grovelling unconsolidated snow after exiting the runnel, I promised myself never to scoff again at aid climbers. Powell started to climb but quickly decided to jug on one rope with a prussic. I belayed him on the second rope while watching television sized blocks ring constantly down the steeple opposite. Approaching me Al stared, holding my eyes with his eyes, and whispered,

Two pitches of unprotected powder placed us on a knife-edge arête of snow beneath a great tilting serac fringe. We cut a step for a bivvy and ate. For an hour I watched a storm track across the range and knew it wouldn’t be long before we felt its force.

The storm came in, hitting us with snow and hail. The wind gusted and the views disappeared. The night arrived as we were enshrouded in our vertical world. I squeezed alongside Powell, shoulder to shoulder inside his homemade bivy bag.

“I suppose we can sit it out for a day if this keeps up.”

For once I didn’t have to strain to hear his quietly-hissed reply.

“No need. We can climb through this.”

I thought of the slopes above loaded with fresh snow and how little it took to knock me off last year.

“Aye, I suppose we can,” I replied, though with not quite as much determination.

Easing the ache from our bodies on the first pitch of the day, the sky thankfully cleared and the sun breached the horizon. Within no time the mountain began its morning song. Six pitches of weaving and grovelling followed. Climbing more vertical unprotected mush ate into the time, and it was with joy I tunnelled the second wafer-thin cornice of the day, breaking onto the ridge. Celebration took the form of a single mars bar.

At last the dread was put behind. We were now on the East Buttress first climbed by Egger and Jungmair in 1957. A panoramic vista opened out in front of me, new intense deep blue lakes and valleys, new mountains. I felt alive and optimistic.

Dropping down from the cornice I traversed the crest of the buttress to belay beside a large ice overhang. Powell swam past then climbed beneath a wild umbrella of ice where he fixed a belay.

“You’re going to love this.”

As I climbed toward him, I didn’t think I was. Sitting at the rear of a cave, Powell reminded me of a fly in the jaws of a Venus Flytrap, but this fly was attached to screws and sitting at the edge of a hole looking directly down the face. Traversing the wall of thin snow surrounding the hole Al shouted loud for once,

“Careful you haven’t seen how far that overhangs.”

I hadn’t, but it soon became obvious as I joined him.

“Why is nothing on this mountain normal?”

Ignoring my whinge, Powell set about digging a ledge, making a pulpit overlooking a congregation of fine mountains.

The third day followed in a similar fashion to the second. The climbing was never as hard as the first day but just kept coming. We cut slots, carefully crawled crumbling rock and pulled overhanging ice. Having squirmed more bottomless powder, I basked in the sun and checked the buttress above. The rock was the same as below, a pile of crumbling cornflakes. Rusty pegs sprouted from lumps of congealed mud, and ropes swung forlorn in the wind. Powell led a steep mixed chimney to leave me the third overhanging and unprotected excavation pitch of the climb.

Crossing numerous flutings, digging from one to another, I traversed the headwall. The afternoon bubble-up had started earlier than normal. Spindrift poured, burying us both as we fought to reach the summit ridge. Clouds of powder blew, whipping the hundreds of fringed icefalls hanging on our left. Powell climbed a fluting direct pulling onto an ice-slope lashed with snow, engulfed in cloud. Joining him, I immediately became concerned.

We had climbed all day having eaten only one bar of chocolate each. I could feel my body eating away muscle for fuel and imagined returning to my job in the prison gymnasium emaciated. The drug detox class would come into the gym fresh from the street, rattling and drug addled. They would take one look at me, smile and wink recognising a fellow sufferer. Little did they know, the drug of my choice didn’t come in tablet form.

I shouted in Powell’s ear,

“How about we dig in and wait till the morning?”

“No way, what if the weather doesn’t clear and we get stuck here?”

He was right. We had no food left and even less energy. Getting down was going to be exhausting enough as it was. The line had dictated we move light and fast. We had no fixed rope to slip back down in times of trouble. There was no de-stressing, relaxing and eating before our summit push. This was our chosen and preferred style, but if we stayed up here I was going to make the worst crack addict look healthy.

Our passage across a corniced ridge was disconcerting. A lump we guessed was the summit, about 100-metres away came into view on occasion, but unable to see what we were climbing into was maddening and terrifying. We stopped and waited. Battered by the gales and the snow, cowering, half an hour passed before Al voiced the brave and only decision. Without question we turned and began the long and scary journey home.