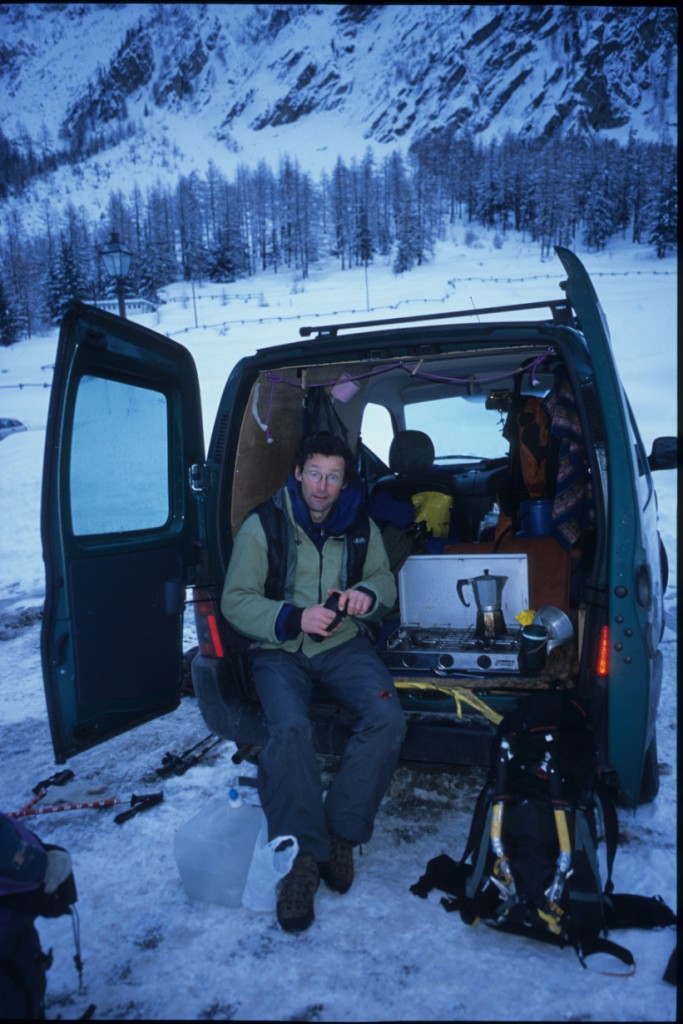 Nowadays, on a regular basis, I find myself reading derogatory remarks on internet forums about climbers who are sponsored. Some of the comments are directly aimed at me, some are not. If the comments about me are fair, I think, ‘each to their own’ and say nothing. Some of the time I will e-mail the person direct and give them my side refusing to become involved in an internet squabble. Sometimes I will call them bloody hypocrites, especially when I find out that they are doing exactly that which they are accusing me of. Most of the time the people making these comments on the web are ill informed, their comments are generally unfair and I can only surmise are driven by ignorance, frustration, guilt, jealousy or bitterness.

Virtually 100 percent of the people who choose to complain about sponsored climbers generalise. So when remarks are made such as,

I get annoyed, because this is about me as I am a sponsored climber. I would argue that I have and I do lead/live a real life and I’m sure that some of what I do is of interest to some readers of magazines.

I remember reading an article about Andy Cave years ago in OTE magazine. That of course is Andy Cave, ex coalminer, author, mountain guide, dedicated climber, sponsored climber and a man whom I’m sure lives a real life. I read the article several times and it inspired me and made me think along the lines of ‘why can’t I live like that , attempt to climb some of those mountains, take a risk with my life choice ’ which of course I can and I have, just the same as anyone who has the bottle and the inclination, but who in general does not. Why’s that then? Well I’ll tell you why, it’s because a lot of the folk bitching about sponsored climbers are sat on their arse, behind their computer, too busy bitching and too afraid to take a risk.

“You’re right, other routes will be done there, but it is such an expensive, isolated place to get to, & when you get there you will need so much support on a 4000 foot climb. 18 days on the crag. Who can afford that? Only sponsored or rich climbers. We know that there are guys who have the ability to do well there, but can’t afford it”

This remark was made about Mark Stevens, Stu McAleese and Twid Turner’s ascent of a new route on Baffin Island. This is an unbelievably ignorant, ill-informed and stupid comment. Anyone can afford it if they apply for grants, approach companies, work hard to save money, train hard, make sacrifices and gain a good grounding that will help them find funding, but hey, that all takes time and commitment and balls/ovaries doesn’t it? This is what gets people like these three out there doing climbs like this. Yes there are loads of folk out there who could do this, but there are not loads of folk out there who are willing to dedicate the time and effort to do this. And returning to the first comment above, all three of this team are mountain guides who work exceptionally hard and live real lives.

Below is a comment that was aimed directly at me. At the time I let this go even though I was accused at over-grading, spraying, being vain and so being a liar. Everyone is entitled to their opinion but this again was a very ill informed, ignorant rant and purely because I get free gear.

“But it puzzles me why media like you report grades of new routes without adding a caveat such as ‘unconfirmed’ or something along those lines until a route gets at least a second ascent? Forgive my cynicism, could it be because the people involved may just be a tiny little bit sponsored? Do you mostly report about people who are sponsored because that’s where your biggest source of revenue lies? Or is it because the usual suspects are the only ones who care enough about their image to send you reports? After all it’s not necessary for the record to send reports to ukc, a note in the OHM book is all that’s needed.
To put it in context – at least two new grade VII 8’s (unconfirmed) have got done ground up in Wales so far this winter, the FA’s aren’t sponsored. You didn’t report them even though a cursory 30 second glance of baggy’s blog twice a week would have told you about them. Personally I honestly don’t care what’s reported on your site or any other, but I confess to being a little bit interested in the whys and hows of why some people’s spray sprays across my laptop screen more than other people’s spray.”

There will always be people who have the ability to climb the same routes as the people we read about but we wont hear about them, this is because they don’t publicise what they have done or it isn’t picked up. Well brilliant, it will always be like that, it has always been like that. I’ve been there, in fact, I still am. I remember laughing when things were reported in the magazines about something that other people had done in the hills, something that I’d already done or done in better style, but did it make any difference? Not to me it didn’t and why should it unless I was jealous of their mention or I wanted some of the recognition. I was out for the climbing, the adventure, the experience and it didn’t affect my experience one bit to read about someone else doing the same climb I had done and why should it? Folk should just get over it and look at what they do themselves.

It has become a bit of a cliché to call someone who makes derogatory remarks about a sponsored climber jealous, but hey, clichés are clichés for a reason and in climbing there is a shit load of jealousy. In general we are all passionate about our activity and when we see others getting some of what we think we deserve we feel robbed as we know what they are feeling, we know the euphoria and the excitement they have experienced and we want it and if we can’t have it we feel bitter. In answer to this I would say get over it and get out, make it you’re experience and then if you feel the need to share it, share it, and if not, don’t, but don’t then bitch when someone else does.

“The sad fact about our sport is that genuine devotees are the exception, not the rule. True athletes, masters and visionaries do exist, but only some of them are sponsored. Most are not.”

What the hell does this mean? It was a comment I read on a blog which featured a piece of writing which was generally slagging down sponsored climbers for not being good enough (in the authors mind) to be sponsored. Well I’ve got news for you, a lot of sponsorship is nothing to do with how hard you climb and as soon as people realise this, the sooner they will stop getting upset about it. Sponsorship is about a load of things and if it upsets you that someone is sponsored you probably need to ask yourself the question why is it upsetting you?

“I would agree. I was at Lake Louise yesterday and a heavily sponsored climber was there falling off of 5.11+. I like to give the benefit of the doubt, but really, is even a 5.12 climber these days pushing the sport? Are they worthy of sponsorship by numerous big companies? I don’t think so. These days it seems that anyone who can market themselves well, and presents a good ‘image’ and package to their sponsors is going to try to get as much free stuff as possible.”

And in answer to the above, well why shouldn’t they get free gear if they have taken the time and effort to approach the companies, you could do the same and if it doesn’t hold with you’re morals is it harming you that someone else has taken the baton and run with it.

Over the years I have struggled with been sponsored. I am concerned about the commercialism of something that I am very passionate about, I’m concerned with the same as I have been accused, lying (grade inflation) purely to get a news item. Well I have never knowingly inflated a grade of one of my routes in my life. Some of Ron Fawcett’s climbs have had a big downgrade over the years, (some have not!) and he was a sponsored hero, I don’t think he did the world of climbing much damage and I don’t hear many people slagging him down for being a sponsored hero. In-fact lets go back and pluck a few sponsored whore’s names out and see how much damage they did, Joe Brown, Joe Tasker, Pete Boardman, Mick fowler, Chris Bonington, Doug Scott, Nick Estcourt, Moffat, Moon, Dawes, Pollit, Pritchard, Woodward, Fliss Butler, Haston (both of them), Hargrieves, Rouse, MacIntyre and on and on…

I have been through the ‘I’m selling out’ but of course I’m not. Does receiving free gear change the fact that I have given up more than most are willing, just to go climbing.

“It’s much more refreshing to see someone who climbs hard, groundbreaking routes, without any thought as to fame and outside support…they still work a 9-5 job like everyone else, but climb because they love it, and do no seek sponsorship because, for them, climbing is not part of the capitalist marketing that companies have created, but is one of the last bastions of pure adventure and removal from everyday life.”

Why is it more refreshing to see someone who climbs hard who does not receive a bit of free gear, what’s the difference, what makes their climbing, their experience different and better than mine? Why is it better they have a 9-5 job, what difference does it make to my adventure, my passion, my climbing and my love of climbing that I have given up the rat race, to live a pauper, to climb full time? Am I just going climbing to please sponsors, am I going year after year to the Himalayas and sticking my neck out for a free jacket, do I go rock climbing at Gogarth to get a picture…of course not. I’ve got some bad news for this person, climbing is and has been for a long time a part of the capitalist market, so just get over it and do your own thing. And as much as it pains me climbing is getting less and less one of the last bastions of pure adventure. Climbing walls, bolts, outdoor centres, gear development, websites, wiki’s, guidebooks, u-tube, DVD’s all dumb it down. If you want pure adventure best you jump in you’re time machine mate or go to the Cliffs of Moher in Ireland or just get on with your own thing and be less concerned about what other people are doing.

Nick (sponsored climber and still climbing for the love of it) Bullock.