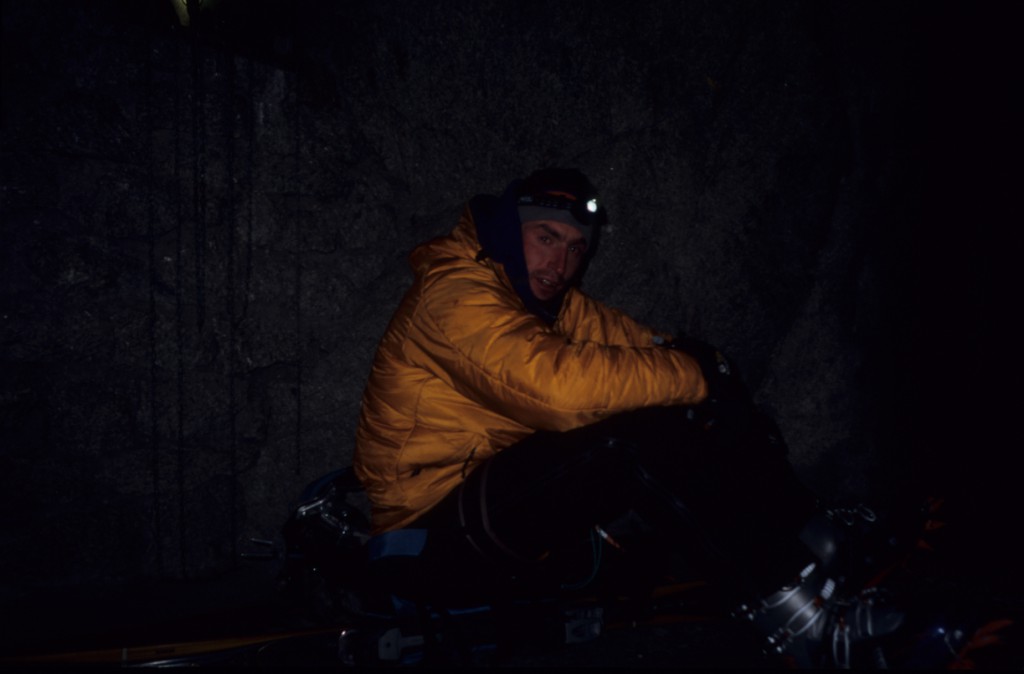 (pic: Kenton Cool sat, quite tiered, in the Midi Tunnel after climbing the second full ascent of Slave to the Rhythm and enduring the horrific climb back up the Midi Arete in 100kph winds. Credit Nick Bullock)

Nervous glances in the hewn cavernous gloom. Frantic exits from the téléphérique-station tunnel. Skis strapped to the side of the sack catch on the sculptured ceiling.

Brightness blinds. Clouds scud. Glaciers rippled and rough wrap around the base of the mountains and squeeze.

Returning to the Midi téléphérique in the dark, we bow our heads; the torch-beam picks up old ski tracks crisscrossing the glacier. Ice mounds erupt out of the night, familiar.

The winter wind burns our faces.

The wind bites; the darkness tricks. Is that a slot? Only the light burning from the slender spire’s tip guides the way to another night on cold concrete.

In the valley a knock on the apartment door,

December ends: Omega has a line of devotees as long as the ice down its blank walls. When the crowds bid farewell, Tim Neill and I are left alone to clear up in a bitter cold auditorium. On New Year’s Eve, a moonlit ski descent from L’Oeil le Burrie Noir, sweeps us through thigh-deep powder into the shadow of the Grandes Jorasses North Face. We breathe in snow-crystals, our lungs on fire. Wind and snow batter the Leschaux’s aluminum skin. I wrap thick blankets around myself, and dream.

Nine winters since the wind blew spindrift, clouds swirled, and Cartwright sat with long legs outstretched on the summit of Maudit wearing a goofy grin, giving a thumbs-up. Five years later I stood at his wake, tear-stung and angry. Houseman and I now leave the Forche bivouac hut in the dark. Two aged men wrapped in balaklavas, buffeted by wind, fight flutings and ghosts. In the deep snow nine-year-old steps take form. The youth kicks a weaving trail for us to follow. A slender ice pencil draws a line to the summit.

Down climbing the Tacul, moving together in flat light, I reverse an ice-overhang and the edge collapses. Screaming-tumbling-crashing, waves-hitting-Gogarth’s-green-crumbling-cliffs, cackling-Guillemot’s-bobbing-in-a-line-on-white-shit-covered-ledges, screaming-hitting-sliding, the swing of an axe, a tight rope and a firm stance stop my fall.

Houseman and I burrow into the side of the Verte as the sun sets. Tiny headlights speed on the road between Chamonix and Argentière. The blood pumps rapid through my arteries. Across the valley the piste-bashers are flashing yellow around the slopes, smoothing the snow for skiers who can find peace without discomfort. I can’t. Not yet.

Across the Nant Blanc Face, glass streaks fill folds in the rock. The slope falls from our feet and sheers into a cliff. Twight and Backes, Parkin, Gabarrou and Silvy. I climbed here with Cartwright on a five-day hit from Britain. Five new pitches joining the ridge of the Brown-Patey but still only halfway up the face, our crampons blunt from two days mixed climbing and kicking, kicking…kicking… as we exited the iron-hard runnel of the Marsigny-Moore, “I hate fucking ice-climbing,” Cartwright screamed.
The summit of the Verte rises above like a massive toadstool. A second night sleeping on snow. Street lights in Argentiere quiver. The helicopter beam sweeps the north face of the Dru searching for the Slovenian with a fractured skull.

The Difficult Crack, The Hinterstoisser Traverse, The Ice Hose, Death Bivouac, Traverse of the Gods and The White Spider. Scraping stacked blocks on the final slopes I lose myself swirling the facets and intricacies of the past months. Approaches in the early hours, sleeping in damp clothes, hunger and humility. Standing on that summit, I knew the descent from numb-fingers and feet, the hot-aches and the fear would lead me finally back to warm rock, green swaying grass and comfort.

My winter was at an end.