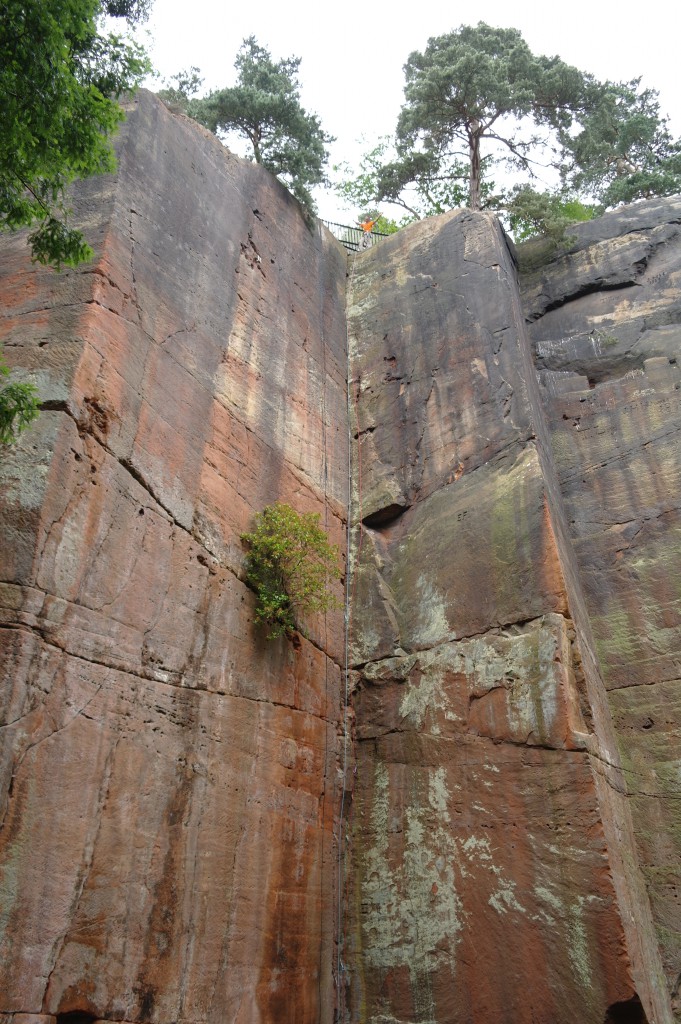 “These climbs are not being climbed often so let’s bolt them to make them more accessible?”

“These climbs are dirty so let’s bolt them to get more traffic.”

“These climbs are on quarried rock so let’s bolt them.”

“These climbs don’t have much in the way of natural protection so let’s bolt them.”

“We should provide a stepping stone for those who have only climbed at the climbing wall.”

What is happening to the beliefs and ethics of climbing and climbers in Britain?

The comments above are some I have read on the internet over the last year and I would answer them with the following,

If you want to climb a route that is dirty or too dirty for you, clean it…

If a climb does not have the required amount of protection for your ability, do not attempt it or get better.

If you need to have a cross over from the wall to the outside, go abroad or second a more experienced leader or get a feel of what climbing really is and get on the sharp end – go scare yourself, test yourself – maybe then you will find yourself?

Do we want to turn what is extremely special into just another bland, forgettable experience? Do we want to turn climbing into purely just another physical activity? You will have heard it often, but there is something extremely special about British trad climbing. When it is gone it will be gone for good. Intense, skin of the teeth outings are not something you run to repeat, (although I have repeated some climbs that scare me stupid) but they are something that you remember, the experience will scratch to the bottom of your soul, and it will enlighten and remind you that you are alive.

I was under the opinion that bolting in Britain follows strict and very controlled supervision, but all the time I find this is not the case and people flout this arrangement for whatever selfish reason. I’m surprised how, when the consensus is in favour of leaving something for the adventurous climbers, it is ignored. What I refer to is the bolting of the excellent traditional climbs on Nomad Wall at Llanymynech.

“The quarry has been disused for a long time and is now a nature reserve that is well managed and has transformed the area into a very pleasant and quiet spot to climb. The views from the routes and top of the cliff out across the River Severn flood plain of Shropshire to the hilltops of The Wrekin and Criggan are expansive.”

The above is taken from the introduction to Llanymynech on the Clwyd Rock Fax database. So this is not some scrappy quarry, the experiences to be had are on a par with many natural crags and the climbs on Nomad Wall were some of the best wall climbs in the country. And of course you will not go to the top of the cliff as there are now lower offs!

My friend attempted to on-sight this climb. The anticipation, the expectation, the mental challenge were according to him “totally out there” and, even though he climbs several grades harder than E56A, he fell from near the top. The memory of that climb and fall is still with him. I watch his face ignite as he re-lives the climb with every telling. This kind of reflection does not happen with a sport climb.

This Won’t Hurt is now a 6c+… and has seen more traffic than it ever saw as an E5… a sad reflection of the way things are going, but it is still not a reason to bolt.

So a top 50 climb, an unsurpassable experience, a climb where you had to breathe deep, dig deep and press on with courage and confidence, is now a good and slightly run out 6c/6c+ .No commitment needed, no sweaty palms and no doubt.

A really great route, much more sustained than most at Llanymynech so wouldn’t argue with 6c+

A really great sport route as are many at Llanymynech. This Won’t Hurt was an absolutely brilliant trad route and should have been left as one. Would it really have hurt to have left it in its original form along with the other climbs on this wall?

Great that you have addressed this wall appropriately. Nice one

Who says this wall has been appropriately addressed? I would say the wall has been ruined and turned into just another wall of bolted climbs, of which Llanymynech has many.

What a great route – I’d been psyching myself up to do it in its previous incarnation and finally decided to have a go last week, only to find the nice shiny bolts:-) However I agree it felt like good 7a, certainly harder than Jack the Smuggler. Does the suggested 6c+ take the direct finish (previously E6 6b) or head off to the arete at the top as the original “This won’t hurt”?

Psyching up to climb This Won’t Hurt in its original trad form, I bet no one has to psyche up any more before attempting This Won’t Hurt and I’m certain they do not have the same reward or the same memories at the end of the day.

To quote another ‘let’s bolt it’ argument, this climb was a mix and match of in-situ gear and trad, so now it’s much better fully bolted. I look at it another way; this climb at its grade could have easily been climbed without any of the original bolts so why not take them out and have it fully trad… I wonder if the Cad on North Stack Wall would be quite the intense and sought after climb if Ron Fawcett had taken it upon himself to bolt it completely, bottom to top, and the bolts had remained. In today’s climate this I think is a strong possibility. I know for many people the Cad remains on top of their tick list even though they climb much harder… Why is this then… What is the difference?

It’s quite interesting that the first person who climbed the Cad without clipping the last remaining bolt was Nick Dixon. Nick’s climb, Nomad, is one of the climbs on Nomad wall, and for me was the highlight of a summer’s climbing when it was an E66B. I don’t mean it was the hardest grade I climbed that summer, it was just a great memorable day …

… Wiping the sweat from my forehead, dirt from fingers, mingles and smears. Mud stains my clothes… eyes dart looking… hunting, thinking… Pulling – peering into the next break I try to guess at what piece of gear will fit… my mind trips, my shoulders burn… ‘Will I need the cam for higher, can I place a nut – but a cam would save the extender for later? Save energy, press-on Nick… press-on. Press on, a screaming voice inside my head. Then more controlled, calm… rest, shake out… Questions – will the next break take gear, if so will it be any good, will it be wet inside the break… Press on, press on. Rest, chalk up… Full stretch… fingers creep over an edge… it’s muddy at the back, too shallow for a cam… the distance from the last piece will increase but the move looks ok. Push a toe to a crease level with steely-staring-eyes… Press on, press on… Twist my hand, palm-up, an offering to the wall – an under-cling in the roof of the break, thank God… Rest, chalk up… Rock-over… balance, balance, control the breathing, come on, breathe… slow… slow… But will the gear hold the fall… And will my mind will my body to make the next move…

Nomad is now a sports climb amongst other sports climbs that were once starred trad climbs. No planning necessary, just count the bolts and put the quick-draws on your harness. Even better, how about going to the top and pre placing all the draws, let’s take away all of the chance of scaring ourselves… Why give the rock a chance at all?

Am I being elitist wanting trad climbing to remain as trad climbing? I don’t think so, I’m just asking for the same experience others have had. I have lost the chance to attempt Screaming Skull, an E66B three star climb and This Won’t Hurt as trad climbs and I feel robbed. I will turn the question the other way and say people who have encouraged and support the bolting of this wall are selfish. They have robbed the more adventurous climber because they do not have the ability or the courage, or the patience to climb these climbs in their original form. They have robbed you, you the more adventurous out there of the chance to push yourself, physically, but more importantly, mentally through the boundary of doubt. This is what traditional climbing is… it goes far beyond the physical.
Please don’t say the climb is still the same physical challenge because it is not. Climbing weighed down by a dozen quick-draws as opposed to a rack of gear, hanging, selecting, sorting, placing a draw and then finally clipping the rope is so much more physical than grabbing a quick-draw from your harness, clipping it through the eye of a bolt and clipping the rope. People who say a person can climb without clipping the bolts, well you really don’t understand at all do you? What person in their right mind, who is pushing, struggling, on the edge of falling, gripped, would not clip a bolt, or in extremis snatch and hang from a quick-draw clipped into a guaranteed anchor. I have been in extremis on trad routes more times than I can remember and that final last effort, because there is no other option apart from falling, has seen me scrape through… The opportunity to shout take when it gets a little uncomfortable or scary should not be there.

How about this… I have always wanted to climb Masters Edge at Millstone but it scares me. Millstone is a quarry. Masters Edge I’m sure does not see many ascents so that surely gives me the right to go and turn it into a bolted 7b/b+ sports climb in the name of opening it up for everyone?

Bolting is like a fungus. It starts in the corner of small dark esoteric little quarries… and spreads… and spreads… until before you know it, Britain will have no trad and the sports climbing we do have will be second rate to the miles and miles of sun bleached limestone over the Channel… This is not a simple little rant from an adventure climber, I have seen bolts creep up trad climbs all over… first one bolt, then two, then before you know it, an E66b is 7b and the experience is lost. It’s a rare thing that bolts are taken out once in, I don’t know why this is, especially with the rising standards and improving gear. On climbs with the odd bolt it would be a much better option to remove the bolts completely instead of replacing them…

At Wilton in Lancashire right at the moment there are similar arguments being used as have been mentioned above. I have never climbed at Wilton, (and as a member of the climbing community I don’t need to have climbed there to have an opinion, your decisions after all affect us all.) but for those that have and regularly do, I suggest you take a long and careful look at what you decide and think of the long term effects on climbers and the future of rock climbing though-out the whole of Britain.

One Response to Diversity?