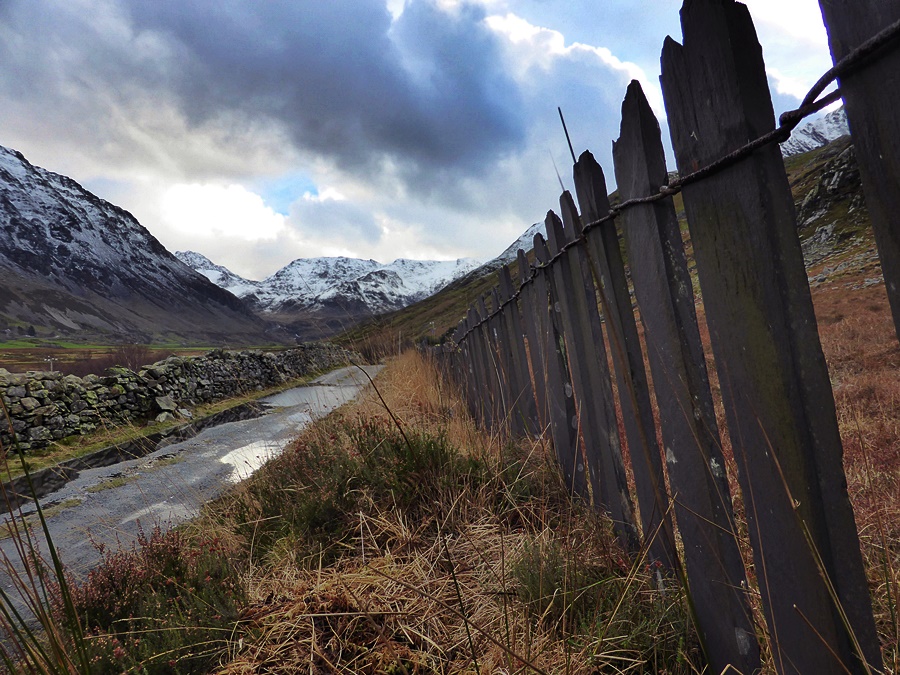 Looking up The Nant Ffrancon toward Cwm Idwal.

Travelling along the A5 and through Llangollen – North Wales is in the grip of water. I drive across Telford’s Waterloo Bridge. Ornate cast iron, spanning the steaming Afon Conway. Betws y Coed and its Christmas lights, swinging threads of flickering colour, are a blur through my windscreen. Wrapped against the wet, people move along the pavement avoiding puddles rippled by wind. Caffi Caban y Pair – hewn stone with small white windows and a shining red Segafredo sign beckons. I continue without stopping, imagining logs burning, glowing embers and flickering orange flames. A fusillade of winter bullets ricochets off the bonnet of a parked car. The pavement, the road, shop windows, my windscreen, umbrellas, Gore-Tex jackets – they all run with rain.

Past The Swallow Falls Hotel and Cobden’s Falls and on through Capel Curig. The Afon Llugwy on my left, a turmoil – tireless, remorseless – the churning brown water rages white. Plas y Brenin, the national mountaineering centre looks deserted, almost post-apocalyptic.

The open road, that was not open, more, just-about, is strafed and the streams running off Glyder Fawr etch the hillside. Cloud and rain skutter between caffi and youth hostel as I drive Pen y Pass. Yellow casts from the hostel windows out onto the glittering road. Sliding down the Llanberis Pass, Scimitar and Dinas y Gromlech are up there somewhere, somewhere in the dark and the rain and the cloud and the wind. Somewhere. Up there. Somewhere. Up. There… 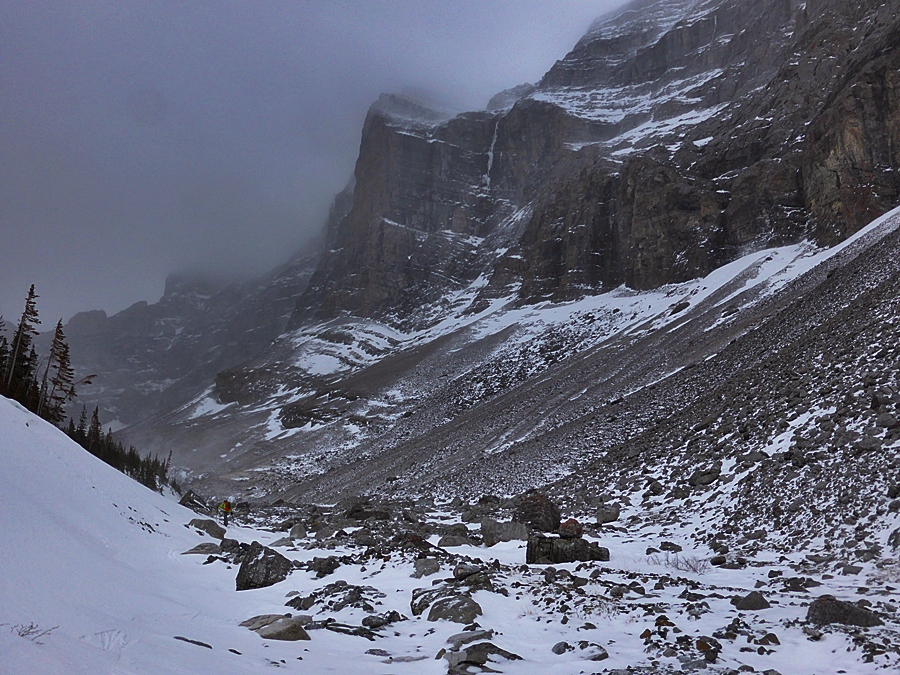 Raphael Slawinski and Mount Sparrowhawk. This picture was taken six days after the bear attack. skiing with climbing boots is not my greatest skill! We decided not to try a new route because of the poor weather and bailed. On the way out, I told Raphael to leave me as he is no slouch with climbing boot skiing. I will admit to my nerves being a tad on-edge alone in the forest.

Since returning from Canada and the bear attack episode, I have had all of my national, general, media, reservations confirmed. My pictures have been used without permission on websites and in newspapers around the world. I have been lied to and I have had friend requests on Facebook from media folk who have changed their profile pictures to disguise who and what they really are. The newspaper reports I have read were factually incorrect and some were complete sensationalism. This lazy, sloppy, rushed form of journalism makes me ask the same question I asked years ago at the time when I was a prison officer in HMP Gartree, in Leicestershire. I was a landing officer on B Wing when an alarm bell rang. I ran to answer the call for assistance, there was blood and a craft knife and a teacher who had been taken hostage. Eventually the situation was resolved. This incident was reported in the newspapers as ‘near escape’, although the prisoner involved was inside the prison and no nearer escape than any other inmate in the prison that night.

It made me ask then, and makes me ask now, is most of what people read in the newspapers, at best, factually incorrect and at worst, sensationalised and made up? And if this is the case, which I, and a whole host of others who have spoken to me about the bear incident, believe to be true, it also makes me ask, why do we put up with been fed bullshit by the newspapers?

A few friends have suggested I invoice all of the newspapers that have illegally used my pictures. The money would not go a miss, but to do this, will make me feel like I’m endorsing their theft and it does not solve my issue, which was,  I didn’t want involvement with these people, it compunds it. I did not want to talk with a large proportion of the people who were repeatedly phoning, texting, messaging, twittering, Facebooking, lying, I wanted no contact, because in general, I don’t trust them. Arrogantly, pictures were used without permission and by opening dialogue in the form of asking for payment, I feel, I will be giving them some form of clearance to continue to run roughshod over anyone.

What I don’t think some people understand is, by accepting money, it condones what they did, it makes me appear to be happy to be paid-off, in a way, accepting a bribe – bought out. It shows I value money more than integrity and honesty. They obviously see themselves above the law and certainly above the rights of the people they write about. Scruples and integrity do not appear to be in abundance with many of the journalists and TV people who reported on the ‘bear incident’ and these are things I hold as high as almost anything.

Greg had a conversation with one reporter. She then wrote the conversation into a piece for publication. Greg asked her not to publish her piece as it was just a conversation, not an interview, telling her if he wanted the incident written up he would do it himself and she replied, “I have to make a living, the piece will be published.”

I do have a price and I’m not going to say I will never be interviewed or appear on TV, but it is Greg and my story and if I tell that story, it will be under my conditions. I would want control of what was being written and said, because at the moment, what has been written and said is in the realms of Enid Blyton and The Famous Five was something I grew-out of reading a long time ago. 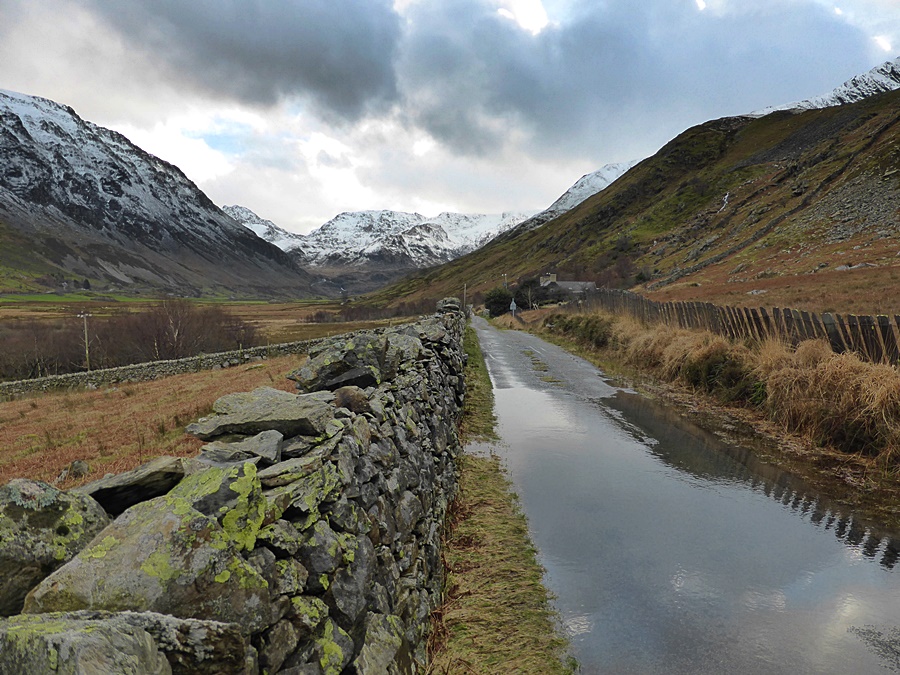 As Christmas approached, Wales became a flowing and wind scoured wilderness. The Hippy was away and I wrapped myself inside his house at Waunfawr – just me, Gypsy the cat, my computer and a bottle or two of wine. I had worked on the new book almost every day since returning from Canada. This was the third edit.

On Christmas Day, I ran from the centre of Waunfawr, through the sodden fields, past the cows, shank deep in mud, toward Moel Eilio. I jogged a river that once was a road and stumbled through a lake that used to be a track. Moel Eilio was a rain thrashed whale-back hiding amongst clouds. The firs bordering the track bent in the wind. The wind caught black slate edges and whistled. And the tune the wind whistled was a wet one. The sun had also gone for a run. Two in the afternoon on Christmas Day and the day was done. A wood pigeon took-off, wings clattering. Reaching the metal gate on the exposed moor, the gale, played a digeridoo through the galvanized bars.

Boxing Day was wetter still. I wrote and edited before finally, after three attempts and two flooded roads, arrived at Ynys Ettwys – Hetty’s Island – how apt the name given to the Climbers Club Hut in the Llanberis Pass. Afon Nant Peris was in full flow. I drove over the hump back bridge before parking outside the hut. No dipper, no buzzard, no heron, no grey wagtail, just the electricity cables fizzling blue and sheep sheltering from the wind.

After a circuit in the hut, I reversed my journey from two weeks previous until reaching Capel Curig. The BBC weather report that morning had said the December rainfall for Capel Curig had been over 1000mm. Truth or lies? Truth I think?

Travelling along the Ogwen and down the Nant Ffrancon, the stone walls on the mountain side of the road, perforated like a tea bag, piss brown water. The van headlights scythe the dark and the pouring rain. I could be the last person left alive on this drowning swithering planet. Not a raven, a seagull or even a dog walker. The Nant Ffrancon, a perfect example of a glaciated valley, wide and semi-circular, is a full gutter of silvered fields. Clouds of rain hide the hillsides. The valley and its fields and small road and hedges are struggling to breath. The Nant Ffrancon is an African plain in monsoon. And as I drive, I imagine Wildebeest.

Entering Bethesda, the blue strobe of police-lights, show-hide-show the skeletal trees growing alongside Afon Ogwen. The afon roars as it bullies its way to the sea.

The book, has at last, had its third edit and has been sent to friends for feedback. It’s time to become a climber once again. On Thursday I fly to Boston to attend four ice climbing festivals on the East Coast and meet friends and climb whenever the conditions make it possible. But I will miss the Welsh rain; it has honesty. 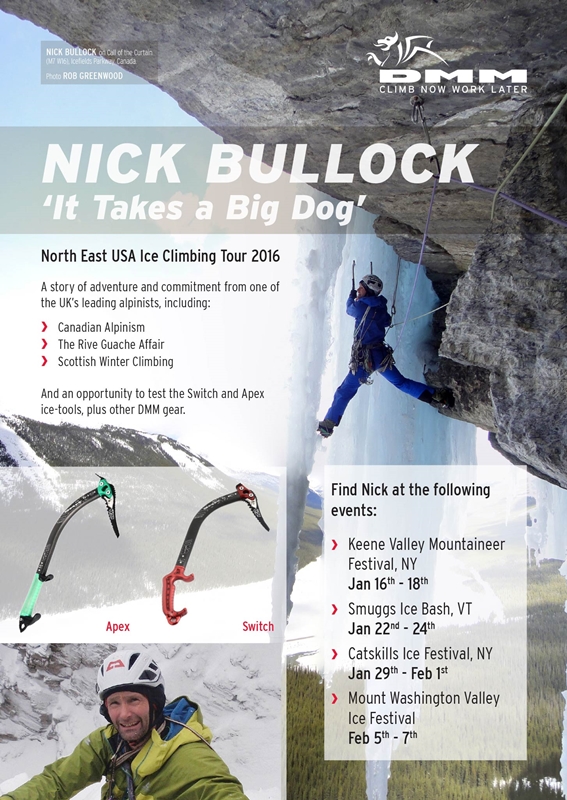 2 Responses to Returning to Llanberis.