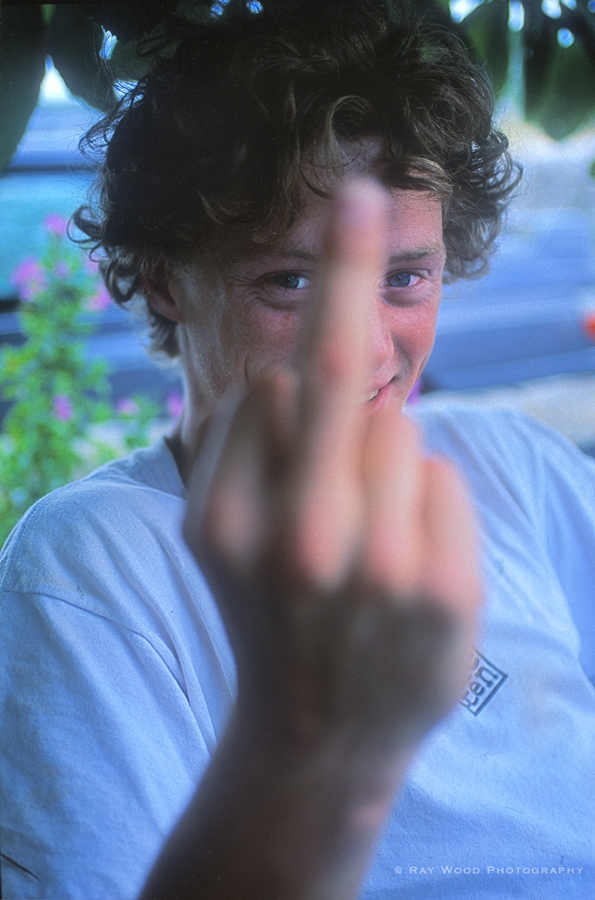 For anyone who regularly subjects themselves to my blog, (gluttons for punishment) or perhaps, for those who don’t, (sensible) you’ll probably know I enjoy climbing at Craig Doris on the Llŷn Peninsular in North Wales. The seabirds, seals, waves and wind, they grind, until after a time, become embedded beneath skin, similar to the muck at the base of the cliff. Over the years, I’ve possibly climbed at Doris more often than some of my other favoured crags; North Stack, Wen Zawn, Dinas Cromlech, Red Walls, Yellow Wall, Rhoscolyn. Doris is a non-tidal sea cliff, so there is none of that messing about between full tides, which is good, because it can take a long time to climb a pitch, and some routes have two! Doris has quirks and idiosyncrasies, it also has a reputation and mystique, but once beyond these, once you give it a chance, you’ll relish your visits and find something long-lasting.

On almost every occasion since that first visit, I laugh thinking about that first climb. For those who know something about the cliff, you are possibly guessing one of three routes, Byzantium Wall, Knowing Her or Cripple Creek, all three would be sensible and good choices, (if such a thing as sensible can be had) but you’d be wrong. The first route was a climb called Bobok. Bobok is a Ray Kay and Dave Jones climb and given the grade of E5 6a. I’ve written about my experience of climbing Bobok a few times, so I’m not going to waffle on again, other than to say it was an eye-opener (It’s here if you are interested). When James (Caff) McHaffie and I climbed it, about twenty-five years after the first ascent, our ascent was the third, which is telling, but also telling was the second ascent team, Will Perrin and Ben Bransby, neither a slouch, both exceptionally talented climbers. 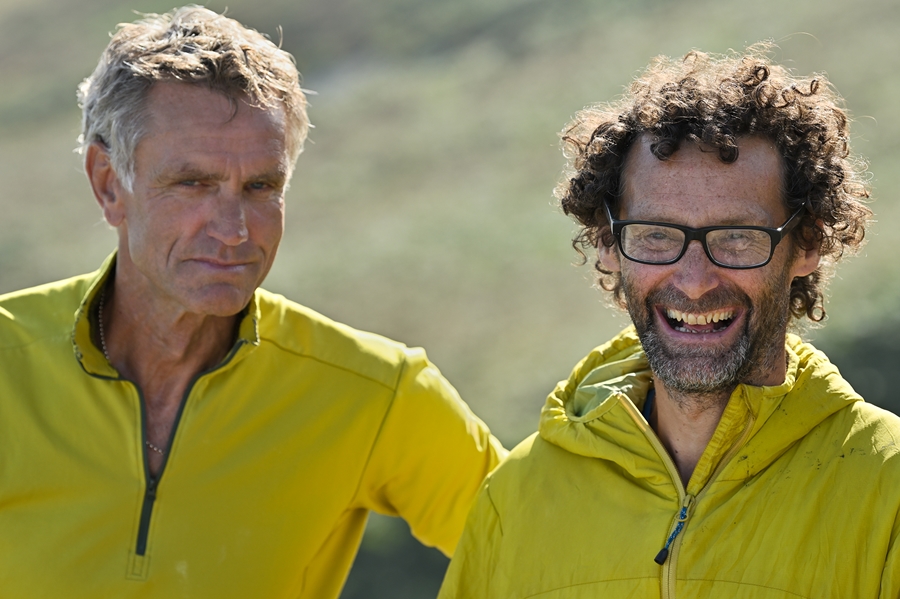 Mick Lovatt and myself. Neither exceptional, but both loving the times spent at Craig Doris. Credit, Ray Wood.

I’ve met Ben many times, don’t be fooled by that geeky, slightly awkward look, he’s a wolf in a woolly jumper, but I only met Will once, and that was a long time ago when I was still employed in the Prison Service. On that occasion, I had travelled to Wales to climb with my friend Owain Jones, but Owain had fallen ill, leaving me on the hunt for climbing partners. Tim Neill told me his friend Will was free to climb, and the next day, running through the rain, Tim led me into a packed, and steaming, Pete’s Eats, the climbers’ caffi in the centre of Llanberis. A fresh-faced and striking teenager sat amongst a group of people surrounding a table. “Nick, this is Will, Will, this is Nick.” After the introduction, Tim left. I pulled a wooden chair from beneath a table – the legs dragged against the floor, a cruel screech cut through the hubbub. In the company of folks I didn’t know, I sat down feeling uncomfortable. All I wanted to do was climb, but that was not going to happen today; thrashing rain streaked the windows, gushed from gutters, flowed along the roadside. Will turned to me, “Do you want to have a walk around the quarries?” “Nothing better to do, OK”, I answered, relieved to escape the crowd of strangers.

Will and I ran to my van. I drove from Llanberis and up the hill and along Y Stryd Fawr (Deiniolen high street), heading towards the parking spot at Bus Stop Quarry. Deiniolen was grey and wet. Some houses along the high street had metal meshing across the windows. Cars were parked along the side of the road making it a single lane. I could see an estate of cream and brown pebbledash council houses with soggy front lawns and abandoned multi-coloured plastic bikes. The pub was boarded up, but the door was open. I sat waiting for a bus to pass the parked cars. Windscreen wipers struggled to clear the deluge, but with each pass, I could see terraced houses and above the houses, moors and heather and piles of grey slate washed with frothing white water. 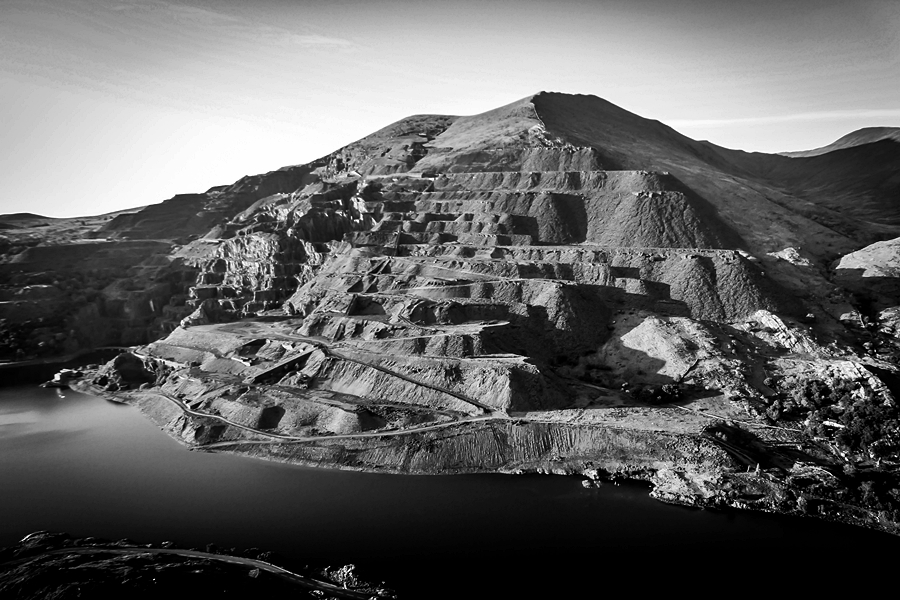 Parking at Bus Stop Quarry, Will sprang from the car wrapping a jacket around his thin body. I was grumpy, I wanted to climb, but here I was in the rain with someone I didn’t know, and someone I really didn’t understand. Will had been enthusing about the quarries and the slate, he didn’t appear bothered it was pouring, and we were not able to climb, he appeared happy to go for a walk and experience the atmosphere of the quarries in the wet. I couldn’t see the point, what the hell did I want to go for a walk for? Experience the quarries in the rain? Will was ahead, pointing out things of interest, things he appeared excited by – twisted railway tracks that abruptly stopped, hanging in rusty curls over the edge of a shining cliff face. Dark tunnels that led somewhere, or nowhere. Workers’ sheds, with holes in the tiled roofs that the rain fell through, and writing carved into walls. Old hats and boots and jackets hanging from rusty nails. Corroded metal pipes dripping water. Broken down fencing. Deep pools of green that I couldn’t see the bottom. A single wet and bedraggled sheep. This was all a pointless waste of time. I would rather be in warm weights gym or a climbing wall. 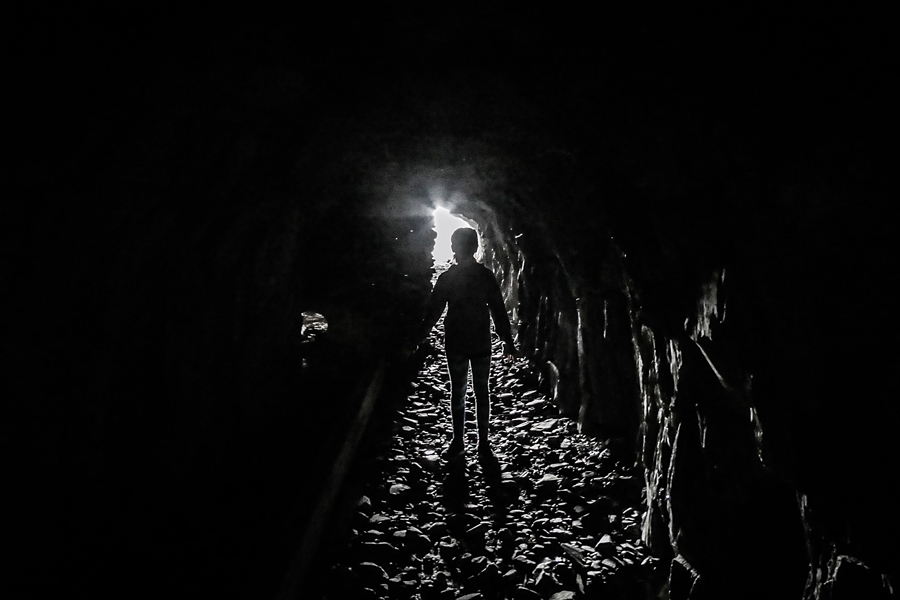 Will was transfixed, watching the white and bubbling flow of water churning its way down smooth water worn black. Climbing was not happening, and eventually I convinced him to leave. I dropped him outside Pete’s Eats, feeling somewhat relieved to escape this unusual and intense young man. 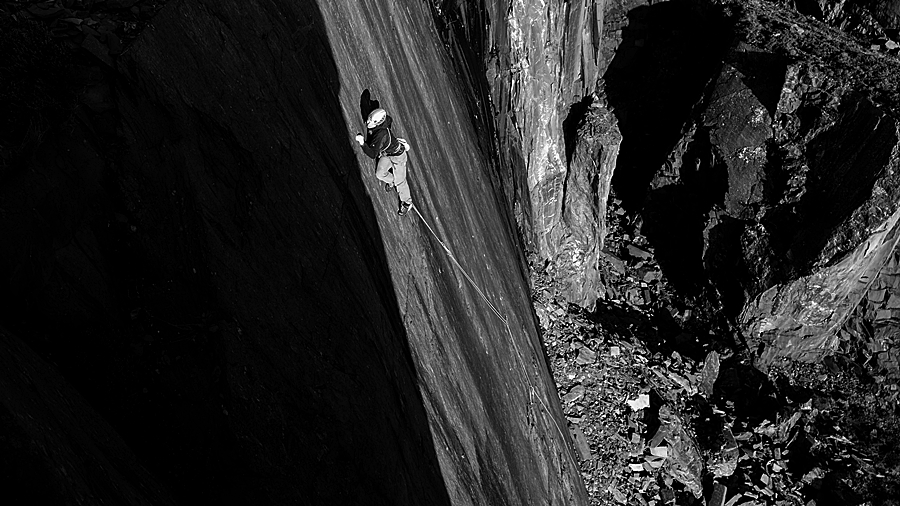 When I arrived in Llanberis, in the summer of 2004, my friends, Tim Neill and Lou, (who was still Lou Wilkinson at that time) were about to go on an expedition to Greenland with a bunch of climbers I didn’t know (many since have become good friends). Will Perrin was also a member of the team, but on the day the team travelled to the airport, Will drove, dropped his friends off, and said he wasn’t going. None of the team thought this was so unusual, Will had always done things differently, and after saying goodbye, he returned home. Everyone from the close-knit climbing community in Llanberis thought Will was in Greenland, and everyone in Greenland, thought Will had returned to Llanberis. Will did return to Llanberis and took his own life. 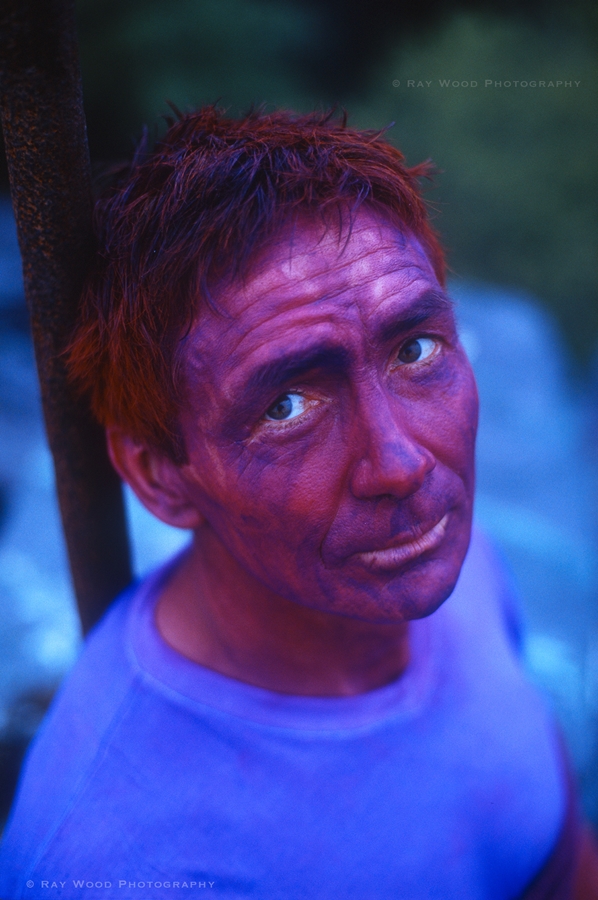 Ray Kay in his purple phase. Ray is a wonderful and warm character from the 80’s Llanberis scene. Whenever we meet, I pester him for stories. This picture was dug out of Ray Wood’s archives, Ray W had to buy some new scanning IT stuff to get me this shot, sorry Ray, but it is a great shot of a great person that deserves airing! Here is Ray W’s background about this shot… “Ray K had just done a slate route in the Nantlle Valley called The Purple Tailed Lovefish and it involved taking photos of him painted purple along with his girlfriend at the time sitting in a pool of water below the route, with eels swimming around her feet. Ray was really into the colour purple. There is a black and white photo of the climb hanging in Pete’s. I wouldn’t be surprised if the route had fallen down.” 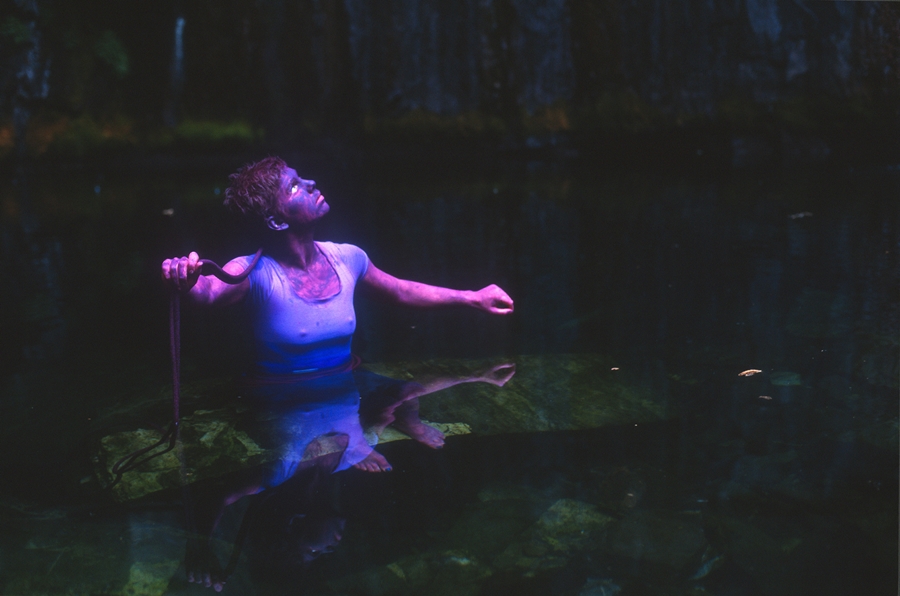 I was staying in the climber’s club hut Ynys Ettws in the Llanberis Pass at the time, and in the days following, it filled with people attending Will’s funeral. One morning I met a man who was attending the funeral, I’d disturbed him as he slept on the sofa in the living room. Later, in the kitchen, we chatted, and I discovered he was a man who had a formidable reputation in the history of North Wales climbing.

Ray Kay was a man full of dark mystique, a man, who, according to tales, was less stable than some of the rock from his climbs and possibly as dangerous. Introducing myself, and speaking to Ray, was almost impossible, I was so in awe of the man and his climbs. To be honest, I was also a little intimidated, but when I plucked the courage to introduce myself, and chatted, I immediately warmed and relaxed. To Llanberis locals, Ray is something of an enigma, a loose rock expert. By modern standards his climbs are not that difficult, but they still remain serious test pieces, Bobok, New Moon, many of the Llŷn Peninsular horror shows. I stood in the kitchen, feet shuffling against the surface of the red tiles, asking Ray about his first ascents and solos from the eighties, he happily entertained my quizzing and was a superb raconteur.

A large proportion of the Llanberis climbing community were mourning Will’s death, people spoke warmly about Will, and I thought about the one time we met, and the time we had spent together in the rainy quarries. I was also in mourning, but for my friend Jules Cartwright, who had recently been killed while guiding on the North Face of the Piz Badile. I’ve now learnt that on occasion the rain gives a person time to reflect, and I wish all those years ago I had given Will more time, and we had spent longer in the rain together.

Over the years of living in Llanberis, I’ve met Ray Kay several times, we always have a good chat, he’s great company, warm and friendly, I’ve grown to like him a lot. I’ve also learned it rains for large periods of time, and it’s taken me a while to get used to, maybe it’s an appreciation thing, maybe it’s about getting older and becoming more understanding, but I’d like to think I’ve embraced the rain completely now, it’s part of the place and makes it what it is, home. 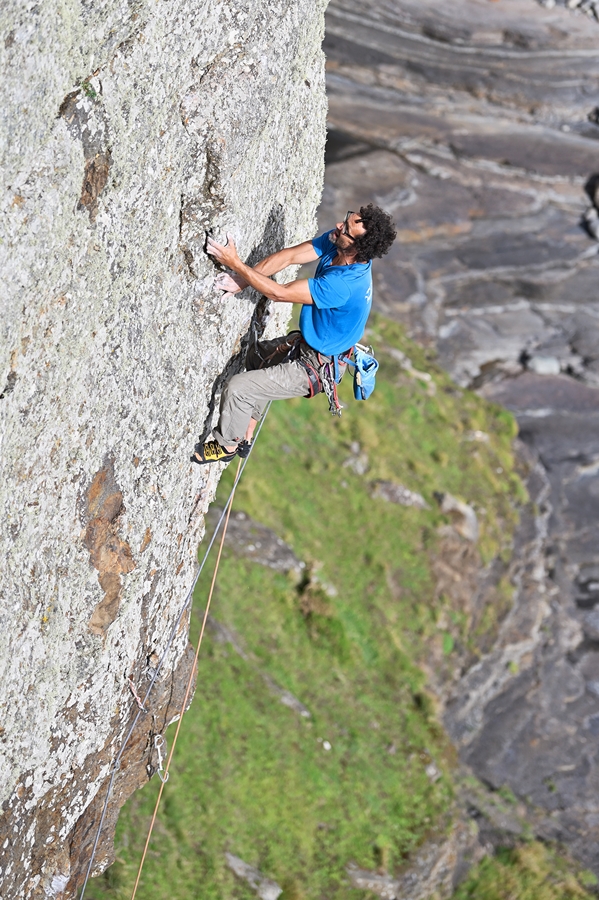 Myself on the 26th August this year, climbing the new route, Tell Your God to Ready for Blood. E7 6b, on the un-named area at the edge of Stigmata Buttress, Craig Doris. Credit, Ray Wood. 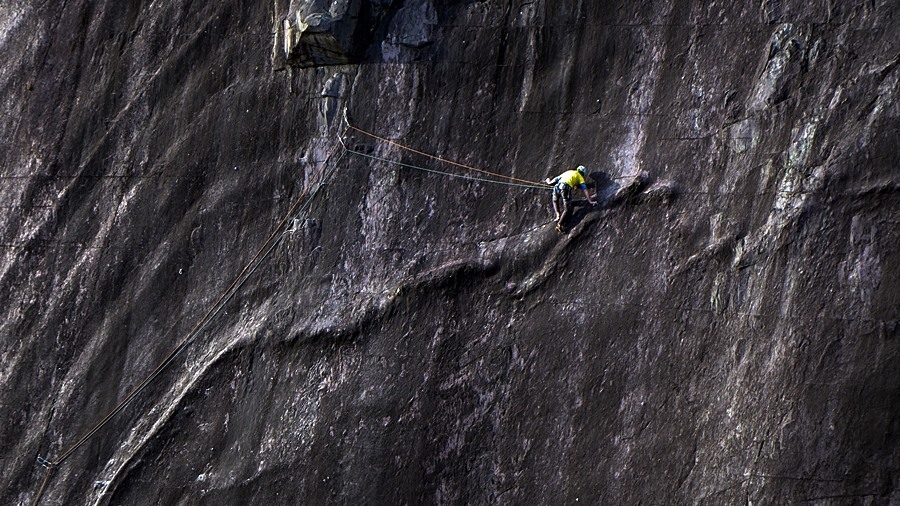 Tim Neill on The Rainbow of Recalcitrance, Credit, Phoebe Denton.