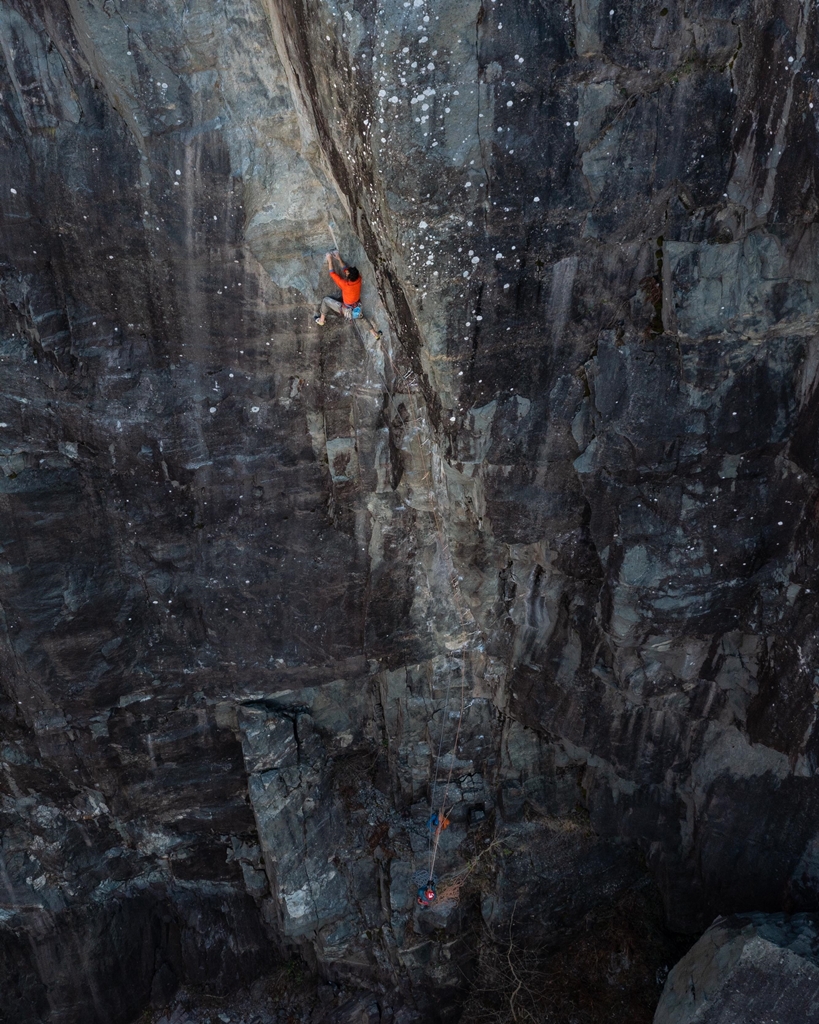 The climb is two pitches, but the first pitch is, THE pitch; an overhanging groove that remains dry in wet weather, although the fingerlock crack at the start does suffer from seepage and will be best after a dry period. The main pitch is sustained, technical, varied, and well protected apart from a bit of a run-out in the middle section, which raises the grade from E5 to E6. Take a good selection of wallnuts, half-nuts, off-sets, microcams and cams (up to a gold Dragon). The second pitch is a clean, 5a slab that was bolted so people can climb out, much more enjoyable than pulling out on a fixed rope.

The climb is the overhanging groove to the climbers left of Synthetic People, which is an overhanging groove to the left of the classic E4 The Bone People). The approach is from a Silver Birch near the top of the scree that can be used as an anchor to carefully walk down the scree to another birch tree at the top of the slab. Abseil down the slab from the tree to a good ledge (double bolt anchor). Either fix an abseil rope from the anchor or rig it, so you can pull your ropes. A forty-metre abseil reaches a good ledge beneath the climb. A fixed belay is in place, so, if needed, a short abseil can be made into the base of the quarry where a scramble on the left of the slabs (ropes sometimes in place) to a tree, or a crawl through the tunnel system (right) leading to another tunnel and a scramble from Filmset Quarry, will provide escape.

Climb easily from the belay until beneath an overhanging corner with a fine looking fingerlock crack. Climb to the top of the crack (great gear). Exiting the crack, and entering the wide, bottomless chimney is the crux. At the top of the chimney, place bomber gear before entering the slabby groove. At the top of the groove, a large ledge is reached (small, not brilliant cams, and a small wire are just enough to steady the nerve). A thought provoking move left from the ledge leads to steady climbing and good gear. After a few moves up, a step back right into the top of the corner before moving right across the overhanging wall lead to an exit onto the belay ledge.

Climb the slab, 5a. Belay from the tree at the top of the slab.