The Pull of the Moon. 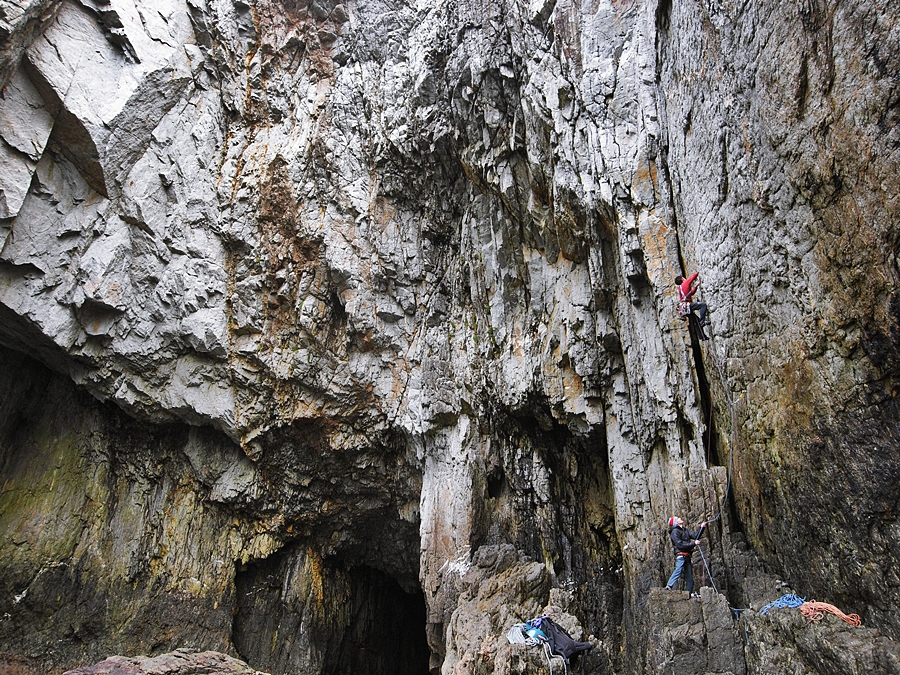 Wen Zawn with Caff on an on-sight attempt of Hardback Thesaurus. T-Rex takes the wide crack to the left of Caff and Mr Softy climbs the middle of the back wall.

The Pull of the Moon. (A work in progress)

The sun wraps its warmth around Rhyolite. Shadows bend. Ferns fidget in the breeze.

Even though it’s early, inside the hut everyone has left. One fully charged Bluebottle is my companion. The fly jerks and buzzes and pops as it hits the window pane. I hate the bluebottle. On the outside of the window, in the top right corner, the fatly speckled spider, sitting in the centre of her web catches the breeze, the web contracts like a diaphragm. I wish she was inside.

Ted Hughes is also my companion. Birthday Letters, a book given as a gift. Did she realise – I expect she did.

The groove of Nexus Direct on Dinas Mot hangs high above the hut – it hangs high, as high as it has for my last eleven years. In the winter, water funnels between its rough rhyolite and in summer, the muck bakes to crispy bran flake. Until two days ago it had been just a groove – an open book – one possibly as raw as Birthday Letters. And if you had asked me where it was situated a day or two ago, I would not have been able to tell you. “Somewhere up there.” I would have said, “Somewhere up there, high on The Mot, somewhere in amongst all of those corners, folds, grass, slabs and sheep. “No I haven’t done it.”

And if you had asked me its character, I would not have been able to answer. But, since Sunday, since I failed to unlock its dimensions and see the pain behind its smooth curves, I now know where trouble lies.

And now, like the moon, it looks down at me before I close the red doors and it welcomes me as I wake in the morning. And like the moon it is cold. I see its superiority, its subtle millimetres of movement, its savagery in the form of beauty, I see numb bleakness and I understand its difficulty and the damage it will inflict but I am mesmerised.

Today I entered and shared myself. I nearly backed off, maybe I should have but I wanted the experience, the feeling of becoming one.

And for a while we moved together.

Leaving the shady side of the Pass, Lee Dawg and I enter into the warmth and sit on the steep grassy hill beneath Scimitar. Scimitar holds so many memories. Most are good.

Generally there is no-one here apart from me, my climbing partner and the blood in the grass.

It was a vision from three or four days ago. King Wad Direct, climb the true line of the overhanging arête, do not move left into the groove, do not have the protection between the two pegs –  no chill-out and experience the big move at the top without a rest. A few extra bits of steep. Difficulty for the sake of difficulty, definitely? In no way disrespectful to Pritch and his first ascent, just a personal challenge.  Bloody genius – why has this not been thought of before? But of course it has and it was more than likely first climbed this way but I prefer to be ignorant of facts. It is less painful being ignorant.

“Low tide is at seven, we should be able to get on the climb at five.”

Will Sim and I follow the worn zig zag in the steep hillside and stop at the rocky edge overlooking Wen. Wen Zawn, the welt cut into the wrist of Craig Gogarth. Greedy invisible wind-fingers pinch and pull and snaffle and push. Grit is thrown in anger. Eyes blur. How dare you? Gulls pirouette and scream. A layer of paste-white cloud covers the sun. Pink Thrift lollipops headbang on fragile necks.

“It looks a little dark. The rock needs sun.”

With time and the gravitational pull of the moon the sea drains and the boulders in the base of the zawn reveal their boil-barnacle faces.

“Well, if you don’t shoot…” I think this is becoming my motto for life.

Will climbs the first pitch of Mr Softy. I belay and stare at the arch of Conan and its massive orange mullion crossing the sea to meet the corner of The Unridable Donkey. A grey seal pops its shiny head from the green pool and stares with sad unfathomable eyes. She must read minds.

The cobbled back wall madness of The Mad Brown. The ready mix of Rubble – I stand on my own and feel almost at piece in this quartzite cathedral. The wind pulls the ropes and a peel of sea water wrings the overhanging walls. A shaft of evening sun breaks the cloud. People, voices, images, flood my mind. Paul Pritchard stretches thin lycra legs across the rotting corner, but just as quick he is lying broken amongst boulders with the sea on the turn. Jonny Dawes repeatedly throws himself at Hardback Thesaurus. Adam Wainwright and Big George Smith wrestle with craziness. Jimmy Jewel solos the greasy off-width of T-Rex.

The Zawn is a cacophony of bird cries, crashing sea, wind and on occasion the deep engine throb from an Irish ferry. I imagine couples in the ferry bar, laughing and drinking beer. And here I am feeding out the rope with old conversation for company.

The sea is a mocking mess of green and bubbles and white foam. Rock is sweating salt. Grasping quartzite fins and wrapping fingers, chalk strips as easy as tears cut a wavering path across pale cheeks. I thought I could flout the rulebook, but no, I am no better than those who have been before. Does love make a difference?

“Let’s bail, let’s get out on T-Rex.” I shout in an attempt to be heard above the wind slamming the door. But wearing the rack I know the first pitch of T-Rex, the slippery unprotected off-width pitch waits for me. Abseiling, I peel away the layers and I don’t like the answer I find as I tie-on beneath the wide fault.

What seems like a long time later, following the final traverse of Dream of White Horses, the blue rope, not clipped to any runners arcs above me. Obviously, it has had enough and wants out more than me but the wind plays tricks and for a second let’s go of the rope and it drops into Wen’s vacuum snatching at my waist before rising once again.

At 10pm, in the dark, with salt smeared glasses pushed into a pocket and a skunks white stripe of chalk running the length of my blue back, I pull into that final chimney and then out onto the grass, out into the angry night with its bullets of rain.

Back at the hut, beneath strip lights, I make a tuna and salad sandwich and eat on my own while standing in the brightly lit  kitchen. The red quarry tiles beneath my feet are cold.

Avoiding sheep shit, walking to my van, I breathe deep and suck the light of the moon, the glowing numbness will act like aspirin. Closing red doors, checking for a text message, I settle to the sound of sheep shuffling before turning the radio off on another day of the same song.

Nexus Direct E5 6b, Pete Crew, Dave Alcock, 1966, 4 points of aid. First free ascent, D Roberts, on-sight, 1977. “Despite its benign appearance, this is a fierce and technical pitch with little in the way of protection.” Llanberis Pass CC Guidebook.

Mr Softy E6 6b, Adam Wainwright, George Smith, 1994. “Follow this (the second pitch) where angels fear to tread.” From the Gogarth Wiki description.