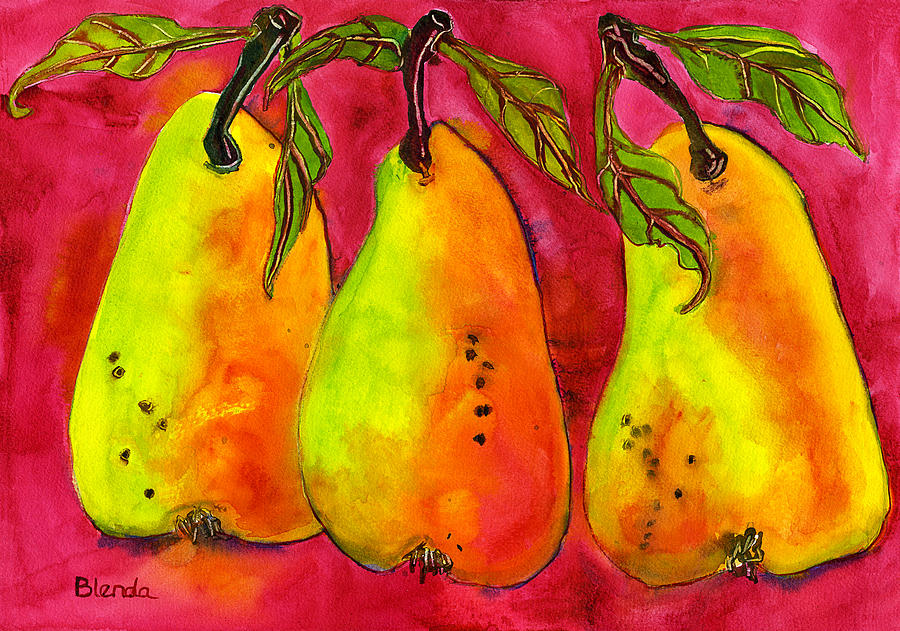 When I trained to be a PE Instructor, there were two phrases hammered home. The first was, Strength is admirable, but strength without skill is naught and the second was; An expert in one field is a beginner when trying something new.

Now, not for a moment would I call Pete Whittaker a beginner, especially where climbing is concerned, but as Matt Helliker, Pete and myself headed towards Church Door Buttress in Glen Coe, this would only be his fourth outing in winter, so, not a beginner, but not an expert by a long shot. Pete had yet to lead a technical pitch in winter, and of course he was keen to do so, because Pete was Pete – young and keen and everybody’s favourite sparkly eyed, smooth skinned, smiley climber. But the line we hoped to climb was new, so we were not sure what it would involve. We knew it was a crack though because Matt and Pete had spotted the line two days previously when abseiling after completing Pete’s third winter route, the second ascent of an VIII/9 called Church Door Angels (not too shoddy that for your third route). Perfect, a crack for Pete Whittaker, Pete ‘wideboys’ Whittaker, how appropriate, how intriguing, we would unleash the not so secret winter crack weapon… I wasn’t missing this for the world! 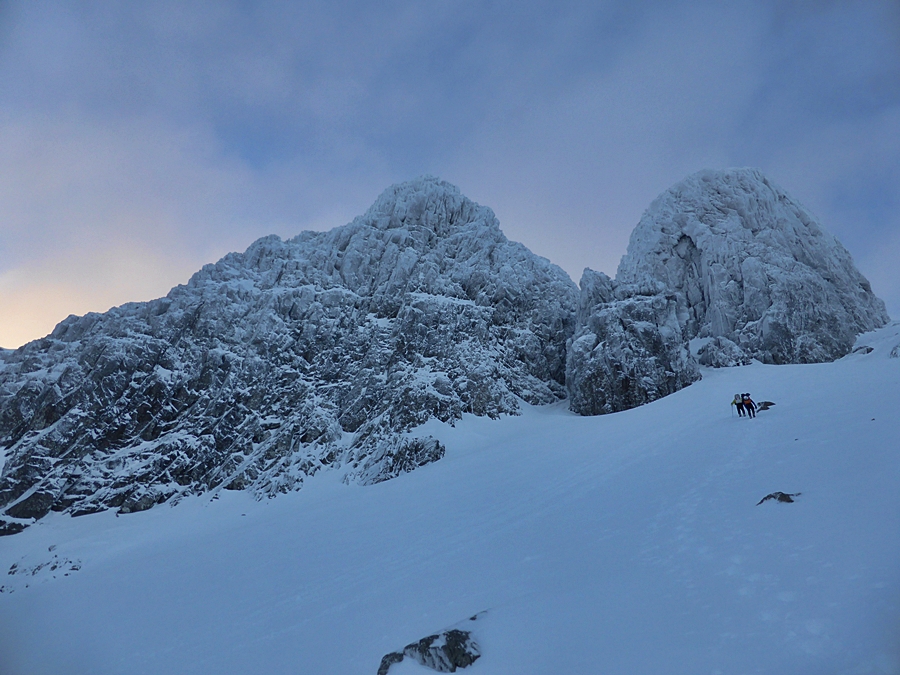 The three of us sorted gear in a large wind scoop beneath the crag. If Pete was two years younger he would be half my age, and it showed. If I were to use a fruit metaphor, Pete, stood next to me, could have been described as a fresh conference pear; smooth and lean and pale, whereas, after the steep, two-hour walk, I would class my condition as past its best, a little brown and mushy. But hey, the fun was about to start and generally, as long as it’s not raining, and once the walking is done and I’ve dumped the rucksack and changed clothes, I’m reasonably sprightly, possibly a comice – more rotund than a conference, with tougher, darker skin.

Soloing, we climbed until beneath the intended line. A wide crack split the cliff before butting against a roof where a couple of steep moves left would reach a ledge and possibly a belay. There appeared to be a slim crack running the length of the wall above and then, beyond, was anyone’s guess. 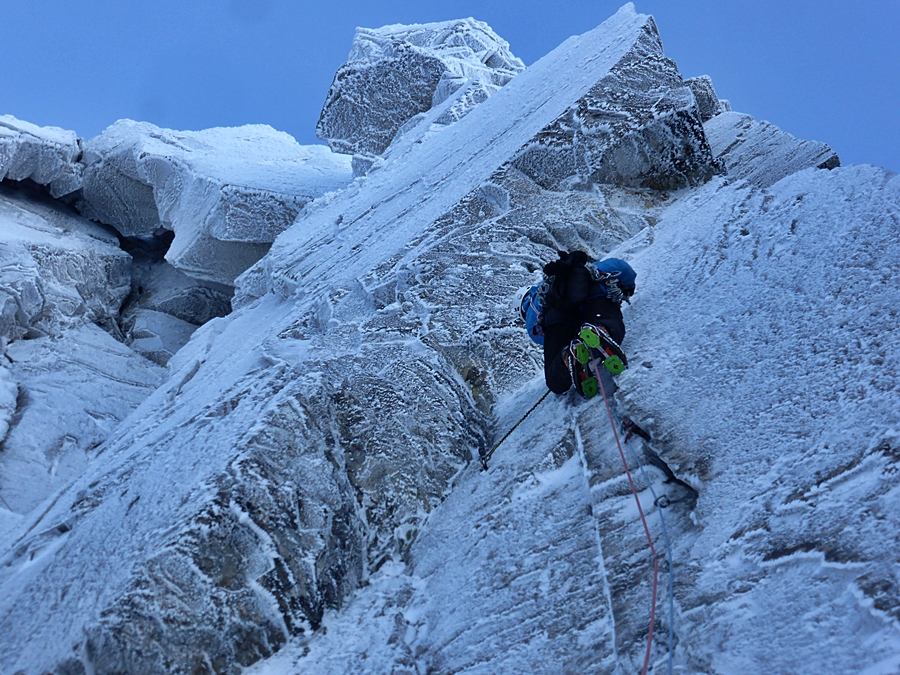 Pete Whittaker on his first technical lead of winter. “USE YOUR AXES PETE!”

Pete opted for what would be the first pitch, the hand-jam sized crack (no surprise there!). The crack looked OK, but in winter you can never tell, and once on his way, doubts started to flood into the juice of my over-ripe mind. Pete slowed and placed quite a lot of gear and he had only just stepped from the ground. My mind raced, I had watched the Wide Boyz film, Pete was… well, Pete was Pete, possibly the best crack climber in the world, (although Tom Randall may have something to say about this?) my legs almost buckled, and not from fatigue. Matt, belaying to my left, gave encouragement. I swung my head, turning to look directly at Matt and said, “Looks hard.” I found it impossible to encourage, how the hell could I encourage the best crack climber in the world while he was climbing a crack, I wasn’t qualified!

Pete moved a little higher and placed a load more gear. ‘Shit, it must be nails’ and then, he began to jam. No, not with his axe, he was using hands, one of his axes was jammed in a crack to the left, abandoned, deserted, unwanted. His hands – he was using his bloody hands and fists, he was jamming and swaying, and jamming. What was he thinking. Shit, it must be more than nails. More gear, more hand-jams, then Pete stopped. “Sorry, for stopping, my hands are numb… argh, hotaches.” I wanted to shout, “Well of course your hands are numb, its winter and you’re stuffing your hands into an icy crack, use your bloody axes” but again, who am I to tell the best crack climber in the world how to go about climbing a crack, so I remained schtum, while all the time quietly fretting about how difficult this pitch was.

Pete was almost at the top of the crack and needed to move left, but he climbed higher to place a massive hex. My fretting hit overload, Pete had successfully made an all free, rope solo of Freerider on El, Bloody, Cap-E-tan, in 20 hours. And he was now climbing out of his way for gear because he was nervous! I wanted to leave then, this was too much for me, I wasn’t good enough for this. Once Pete had placed the hex he made several attempts to move left, and when he did commit there was a sound that filled me with dread. A power scream. I leaned forward at this point and vomited. 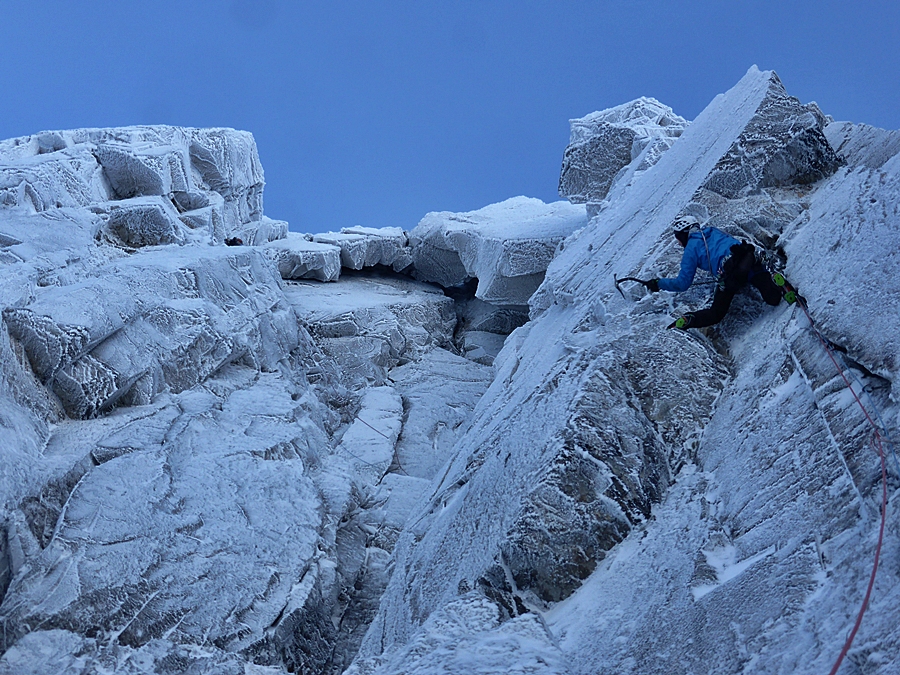 And then he power screamed… And I vomited!

But he made it, he was on the ledge beneath the wall where a belay was constructed. Matt convinced me to stay and at least try to climb this first pitch, which was obviously one of the hardest bits of crack ever climbed in Scotland in winter.

Matt set off and appeared to be doing OK. He complimented Pete on his fine lead. ‘Matt’s climbing well,’ I thought, as he is climbing the most difficult crack pitch in Scotland and can still manage to talk. Respect. But he hadn’t reached the hand-jam bit yet, that’ll slow him. But it didn’t, he stretched and reached right past the hand jams by using his axe and hooked a solid chock-stone. And then it hit me… then, while seconding the pitch using my axes for every move and finding it relatively easy, I remembered the phrase from my PE days… Maybe, on occasion, even the best in the world have to learn a few new tricks. Not a bad start though! 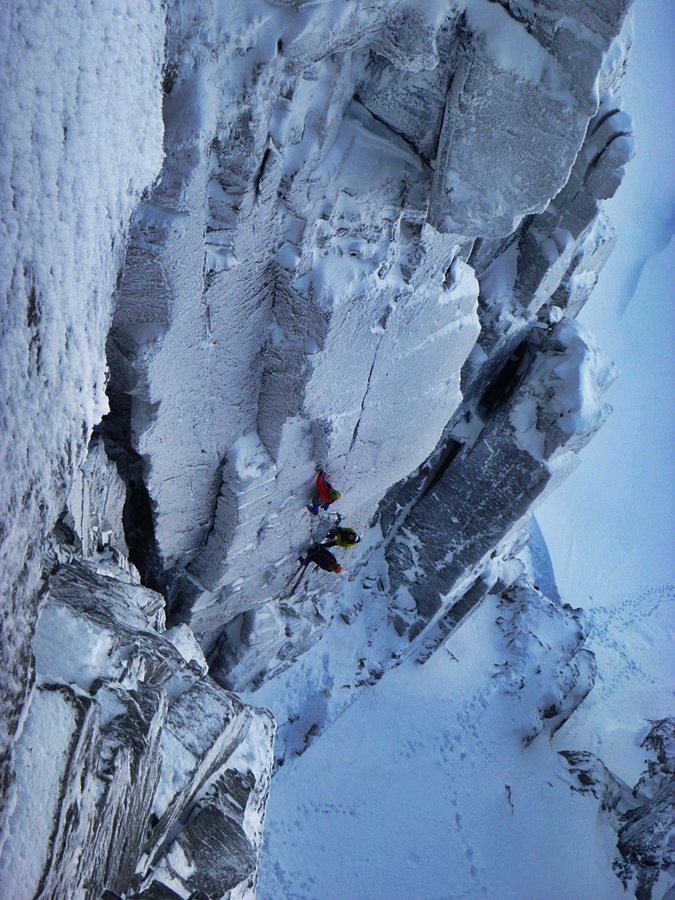 Looking down on the three of us. Pete and myself at the hanging belay. Matt starting the second pitch which was a well protected, continuous crack. This pitch is just about as good a pitch as any I’ve ever climbed in Scotland in winter. Tech 8. Pic credit, Andy Sharpe 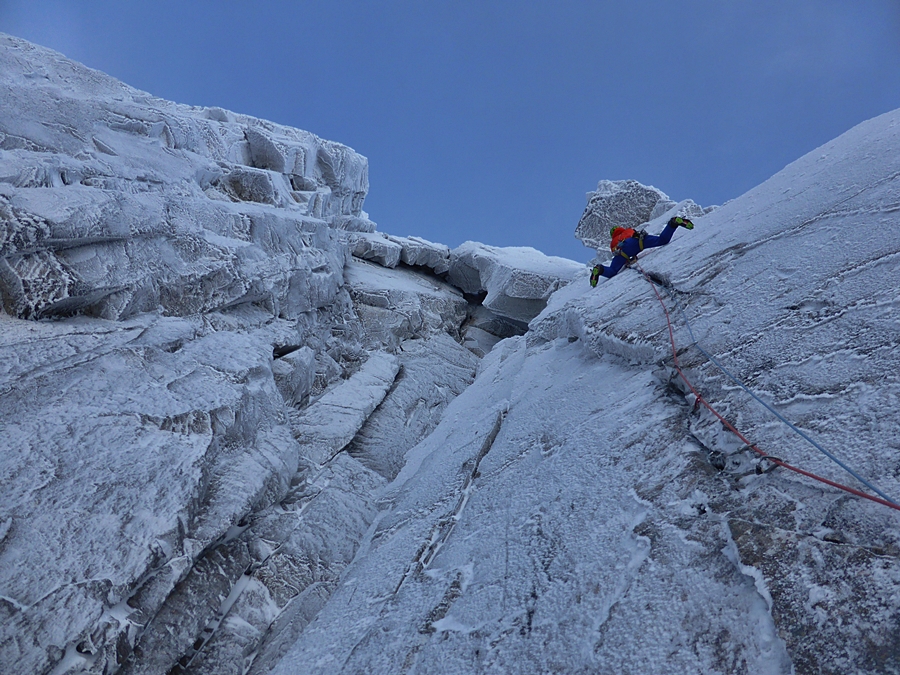 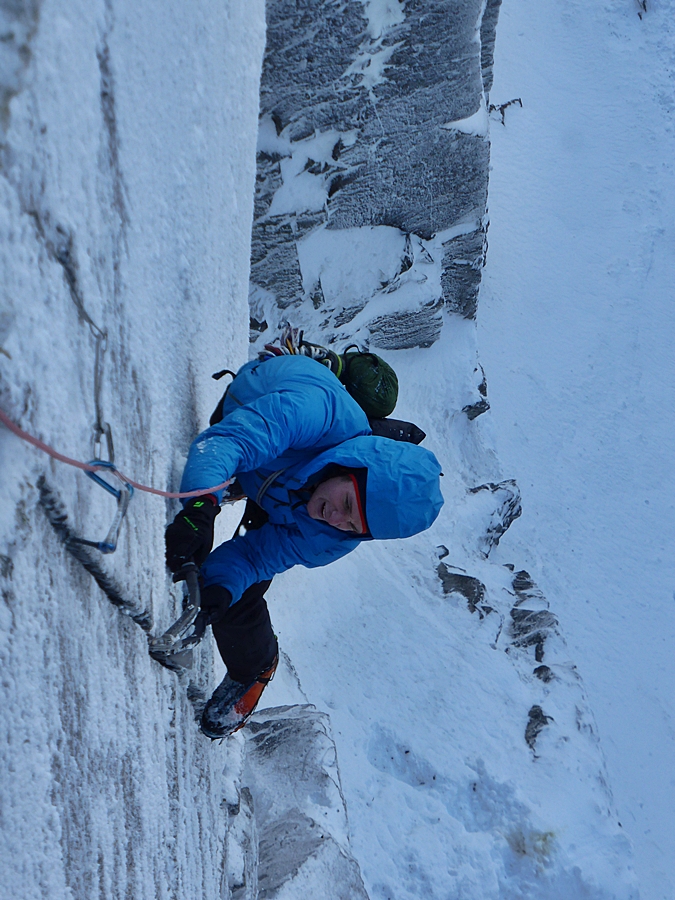 Pete using his axes for once and not doing a bad job of it. He was slowed by my sneakiness – I clipped any tricky-to-remove-runners onto Pete’s rope, a valuable lesson I learnt from climbing with The Hippy (Graham Desroy) in summer. Speaking of which, The hippy is a fine example of the other phrase I learnt from my PE Instructor days, the one about strength and skill, but with a twist, it would go something like, Strength is admirable but The Hippy doesn’t have any, so uses cunning and skill to get through. 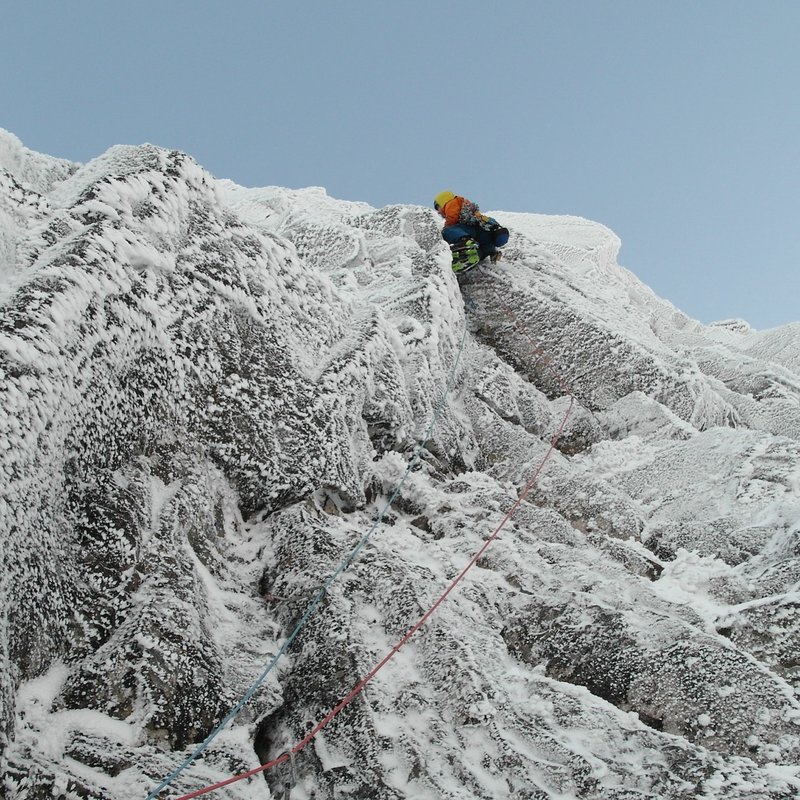 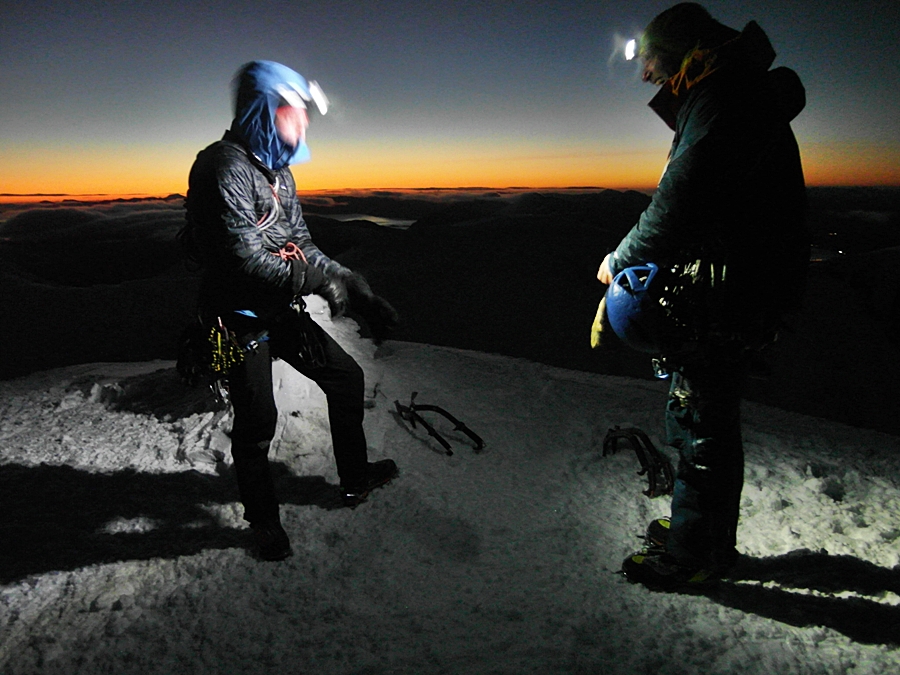 Topping out in the Alpine glow. Pic credit, Matt Helliker. 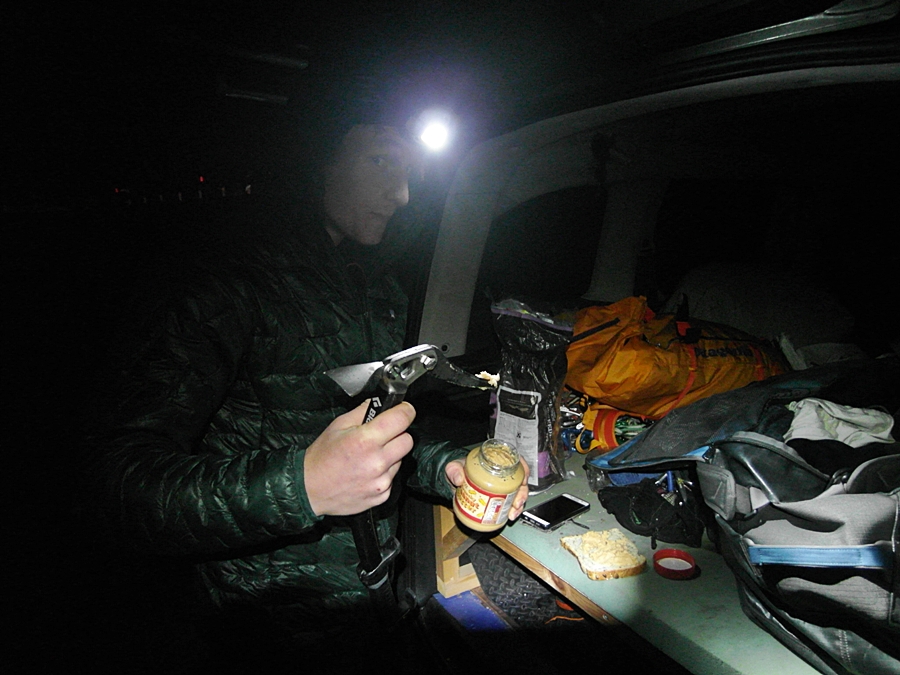 Pete finds a better use for his axe. Pic credit, Matt Helliker. 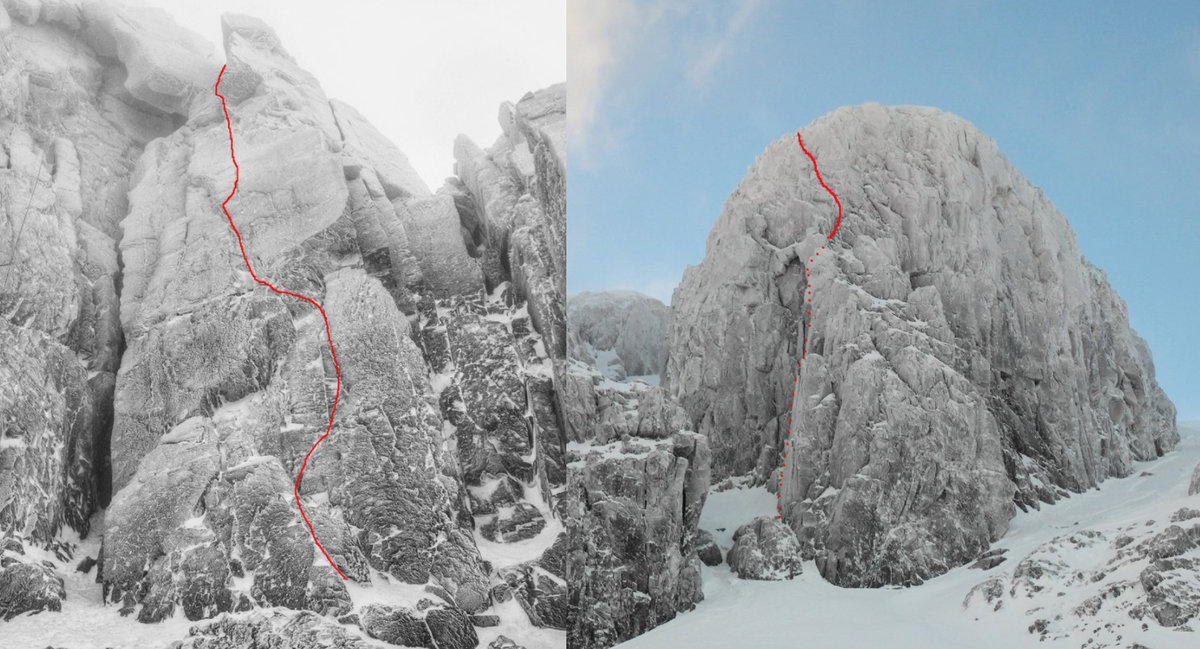 The route: Dark Angel, VII/8. Helliker, Whittaker, Bullock. Pitch 1: 15m, Climb the hand crack, move left at the top, belay beneath a wall with a thin crack running the length of the wall. Pitch 2: 35m, Climb the crack in the centre of the wall. We belayed on the slopey ledge at the top of the crack. Possibly, the best thing, would be to continue to the wide snow ledge above, about another 10m. Climbed like this the pitch is about as good as it gets. Pitch 3: Move right from the snow ledge and climb into the base of a wide over hanging corner on the right. Climb the corner and trend left into a series of turfy and ice grooves. 50m. Pic credit, Matt Helliker.