The Pendulum Swings. An account and a short film of something different. 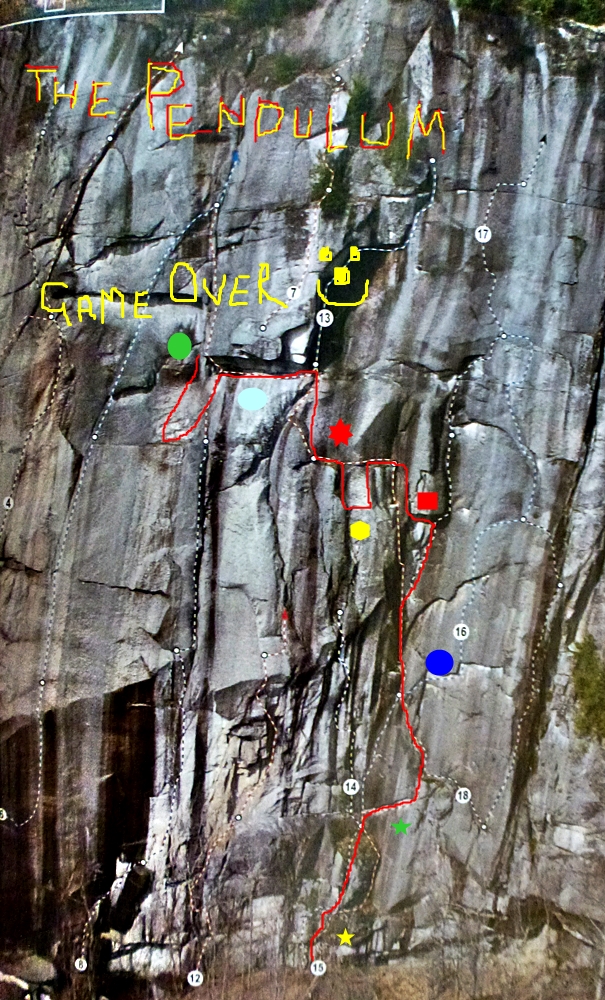 The crazyness that is THE PENDULUM. Cathedral.NH. 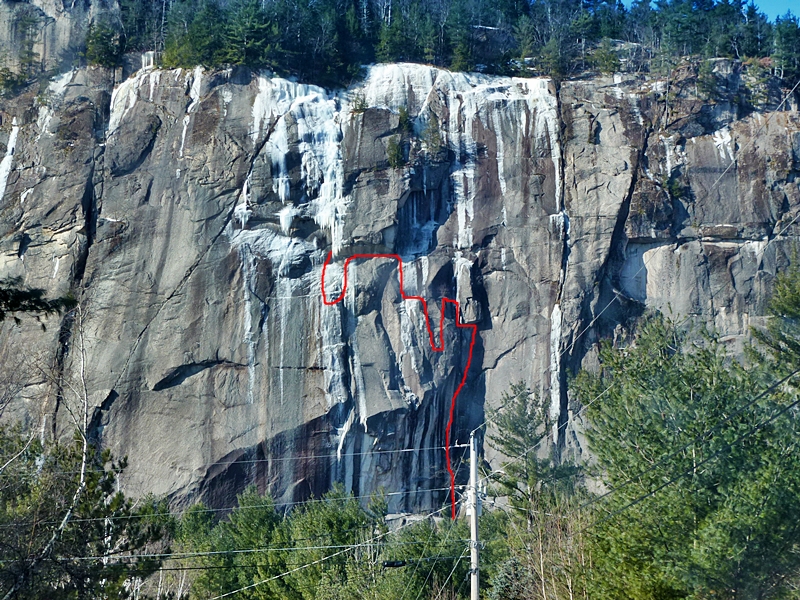 This picture was taken in my first few days, we should have had it then as the ice was somewhat reduced when we made our attempt. Nick Bullock

Squalls of fat snowflakes were blowing between the trees, shimmering like fish swimming down the road. I sat alongside Ben Gilmore driving Doug’s scooby. Ben and I were heading toward Frankenstein for my penultimate day of New England climbing. I felt content. My behind was warm, got to love those heated seats – and today, after all of the thin and run-out ice, I was going to climb something fat and easy to protect, something classic – Dropline, WI5, a ribbon of yellow bubbles flowing over steep rock nestled deep in the woods high above Conway.

I was feeling strong and capable – able to lock with confidence. The muscles in my arms were taking shape and I felt ready for an immediate drive North to Scotland on my return to Britain in four days.

Yesterday, climbing at Cathedral, was different, it was certainly different than the day I was expecting to have at Frankenstein. 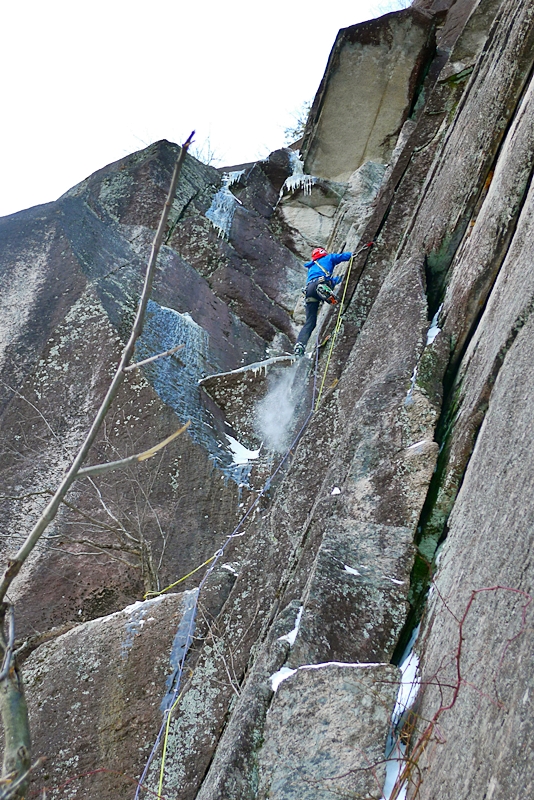 The start of the third pitch which was as spectacular climbing as you could ask for. If it had been covered in snow it would have been sustained Scottish VII/8. Bayard Russell. 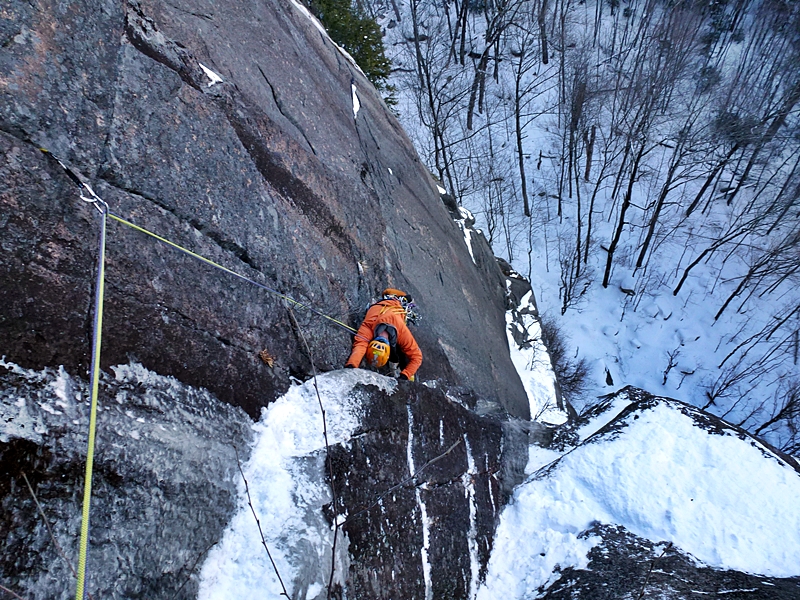 Will Carey, another MOG and an oyster farmer, Bayard and I, headed to Cathedral at 10 am to look at Pendulum. Ever since my second day here in New England Bayard had been whittering on about a route called Pendulum.

Pendulum was a corner/groove/slab/roof system running the full length of Mordor Wall, the largest section of the crag. To make it even longer, it traversed, down climbed and generally minced all over seeking out sections of weakness. First climbed in summer 1967 by Steve Arsenault and Paul Doyle and first free climbed in 76 by Ed Webster and Ajax Greene, Pendulum is described as one of the first true big wall climbs of the East Coast. The Ice Climbers Guide to New England describes Pendulum Route as IV 5.8 A2 (5.11) 5, whatever that means, and the description for this eight pitch route is ‘A long and intricate winter climb with an ice curtain hanging down off the roof. FWA Chris Hassig and Mark Whiton 1977’

I don’t think I had ever down-climbed or traversed as much on a winter climb and this description appears somewhat lacking of information for eight, very technical pitches, but we were with the font of all Cathedral knowledge, Bayard, so what could go wrong.

The route has hardly had any winter ascents or even attempts and if successful, Bayard thought, we may actually be climbing the second winter ascent. The route certainly has not had a free winter ascent.

Bayard set off up the bolt ladder which was installed after the original start of front pointing a tree went out of fashion – the tree fell down. This maybe gives you an inkling of what was about to be unleashed. Instead of pulling on the bolts Bayard attempted to free climb, (The yellow star in the topo at the top of the page) which he gave a good go, but after a few attempts he succumbed to one or two hangs before continuing via brilliant free crack climbing through an overhanging v-notch.

Will climbed the second pitch – a difficult under-cling crack, (The green star) which didn’t have a bit of ice or many footholds – without gloves -Will refused to use his axes as it didn’t seem right, but Will not only looked strong, he was strong, he had climbed the equivalent of 8b on gear. I would have been surprised before my trip here, but now, having spent some time among the locals, I wasn’t surprised at all. In my two weeks I had encountered super driven; super strong and very friendly, and this appeared the norm for this close knit climbing community.

I looked up from the belay after the crack, “That’s your pitch Nick, it looks great doesn’t it?” Bayard was right, it did look great, and it also looked steep and hard. “Go get at it, the odyssey begins.” (Blue circle)

“It’ll have loads of fixed pins.” Both Bayard and Will said, but forty metres later, after steep, secure laybacking with tiny edges for feet, I gently tapped an overhanging ice sheen dribbling down a corner (Red square) to reach the belay ledge, and I hadn’t seen a single peg. I shouted down “Have you guys actually done this route, your beta is useless?” They both laughed and had a conversation about not remembering anything. I told myself to ignore anything either of them said for the rest of this madness. 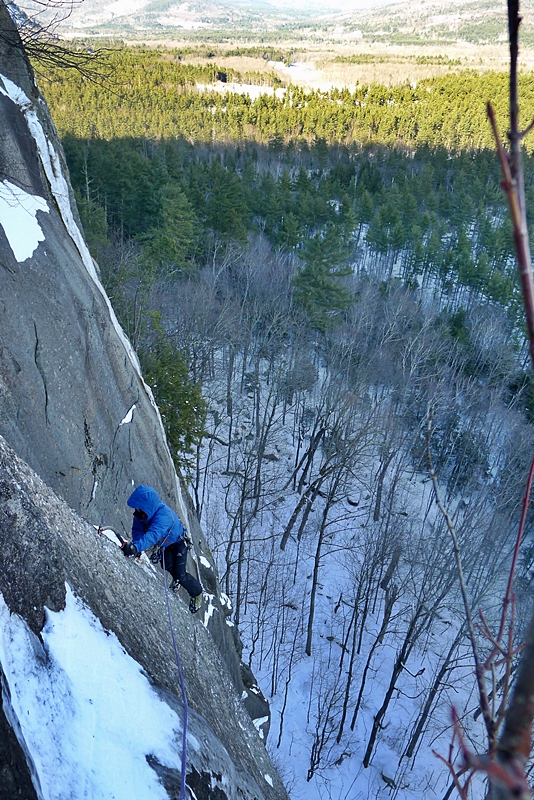 Nick Bullock starting the most insecure steep slab pitch ever. “match on the crystal.” “WHAT BLOODY CHRYSTAL!” Brilliant job by Bayard, all though the 15-foot of, on-top-rope climbing, made this better to lead than second I think 😉

The really ridiculous now began. (Yellow Hexagonal) Bayard left the ledge by down-climbing a torque crack for fifteen feet – all, I may add, while on a top rope – before a step into the unknown across a smooth slab. He was manically laughing. ‘Yeah’, I thought, ‘so would I with the rope guarding every move!’ His picks appeared to balance his body, but for the life of me, I couldn’t see what they were hooking. I convinced myself that without glasses I couldn’t see the obvious positive edge but his axes shook – he was putting a lot of tension through them.

All of my fears came home when Will, seconding the slab move, pinged off and flew. Bayard laughed even more manically. These guys are sick I thought; get me out of here before the madness rubs off.

I reached the slab after down climbing and all of my fears were confirmed, there was nothing to hook. Bayard yelled instructions in between bouts of laughter, “Hook the crystal.” “What fuc*#ing crystal!”

Somehow I managed to levitate across and climb up to the belay in time to hear Will say, “I’m going to pass the next pitch over, I’m not brave enough for that.” And this was coming from the biggest strongest looking MOG I had encountered on this trip so far. And then I hear Bayard say, “That’s OK, Nick loves that kind of shit.” In dread I glanced across at what I was supposed to love and began sweating. It was not the warm type of sweat either, it was cold and clammy. A thin sheen of unprotected ice led up. ‘Why couldn’t I have the down-climbing fifteen foot top rope pitch?” Maybe I should suggest Bayard continue as he had hardly done any climbing on his short shuffle? Yes, that’s what I will do, but before I suggested it I found myself taking thee quickdraws for the belay, it was pointless taking anything else. (Red multi-pointed star)

… looking over to my left, in a groove, salvation shone in the form of fixed gear, it looked like a bashed in nut, so I stretched and I clipped and the sun shone and I was now invincible.

At the belay when we all met up again, Will told me my piece of bomber gear was actually a bashy – a small brass blob hammered onto the surface of the rock use for progression only on an aid climb. I felt queasy and thanked my stars I didn’t do aid. 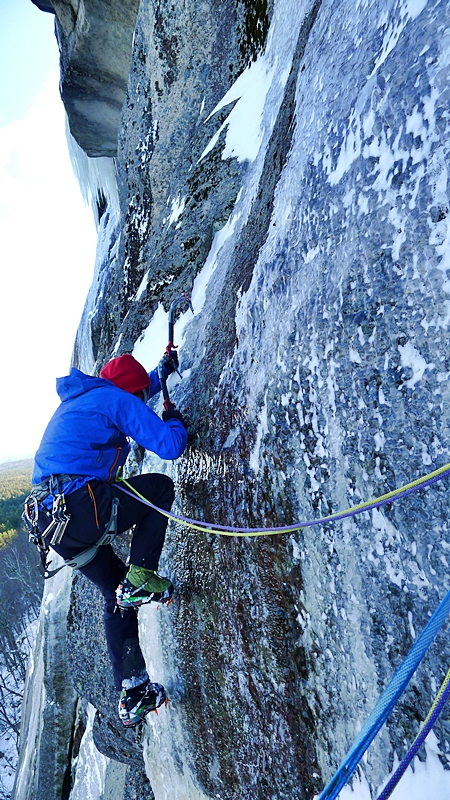 This was Will’s pitch but he kindly handed it over. “Thats OK Will” said Bayard, “Nick loves this kind of shit.” I’m not so sure I do! Bayard Russell. 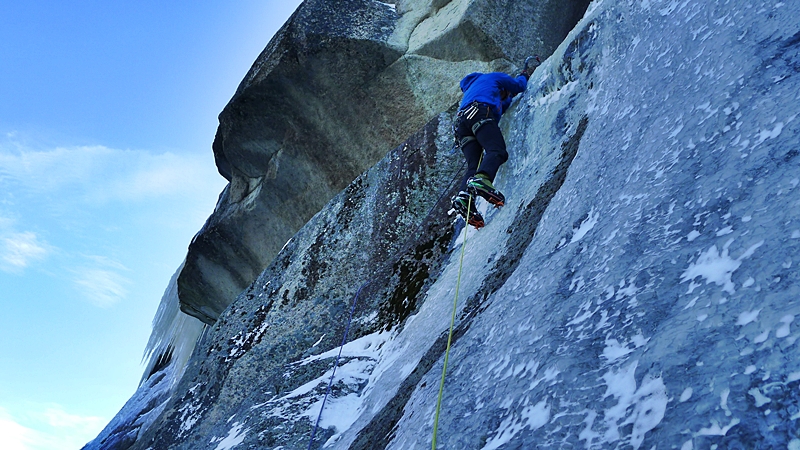 Will was feeling guilty having handed over the death ice pitch so took the next one – a crawl traverse along a ledge, which turned into a drop down with no footholds, until more down climbing on a top rope following ice. (Light blue egg) I screamed like a spoilt child, “I want down-climb, I want top-rope.”  But skittering and nearly falling from the off-balanced ledge I was pretty chuffed I hadn’t led this one. 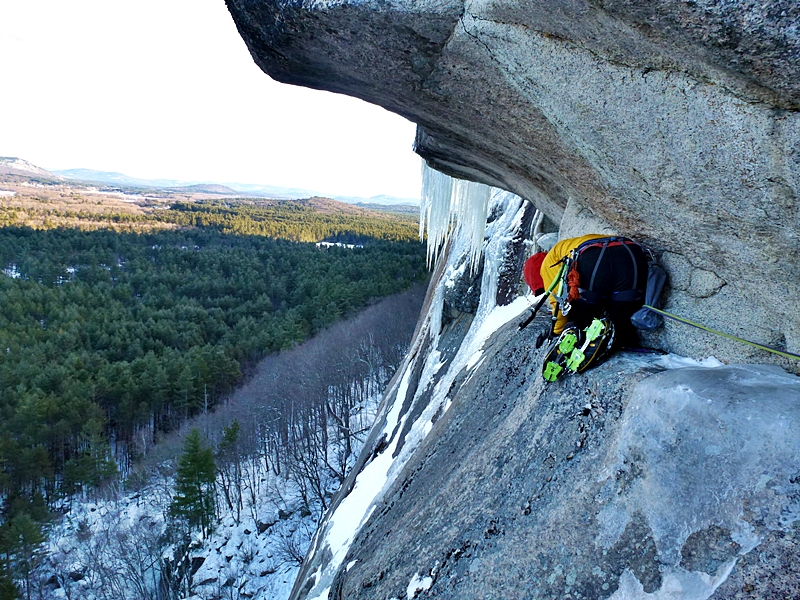 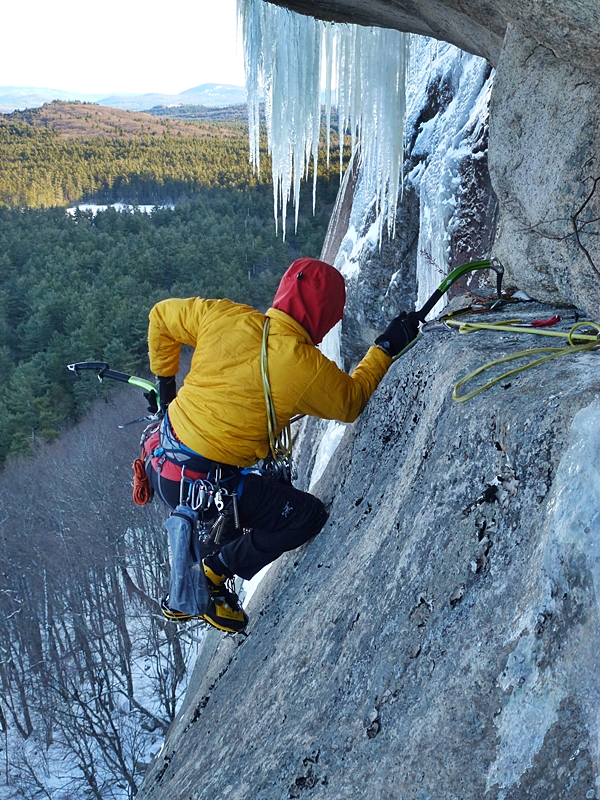 Will on the slightly more standard part of pitch six. Nick Bullock 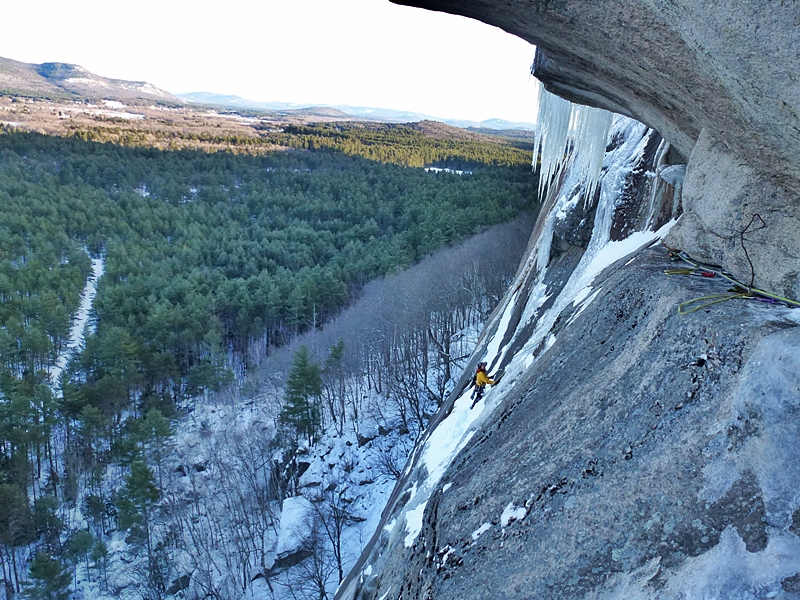 Will after the downclimbing on pitch six. Nick Bullock 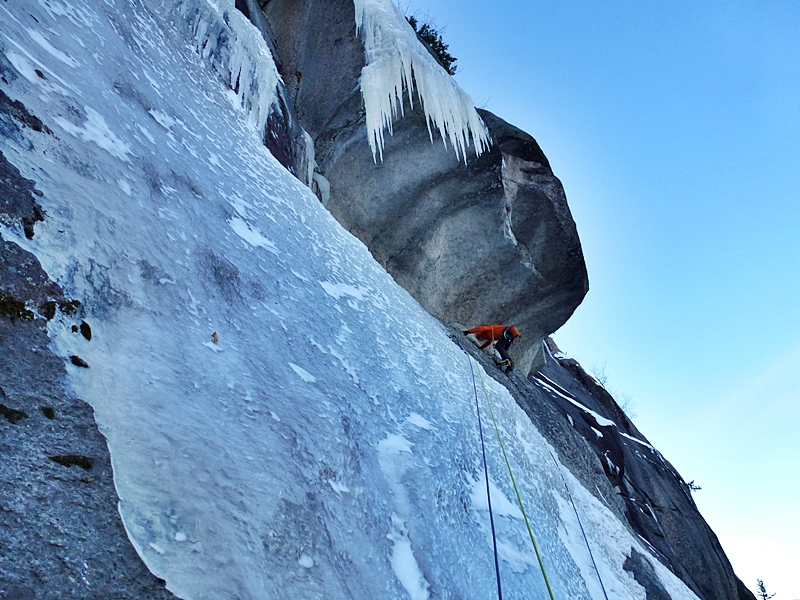 Finally we were looking up at success, just one pitch, in fact just one hard move to get established above a roof that was covered in ice, just one move before a constant flow of fat cold patina. How hard can it be, we were hero’s, it will be easy! Bayard set off and pulled into a corner near the ice fringe that was drooling from the roof, (Green circle) he climbed slightly higher and then made an error, he let the ice know he was there. He hit the fringe and it groaned, slumped and dropped. It dropped like a bag of potatoes, smashing and crashing before hitting the deep snow at the bottom of the crag. “Well that’s it then.” And that was certainly it, but at the time I didn’t quite appreciate how much. 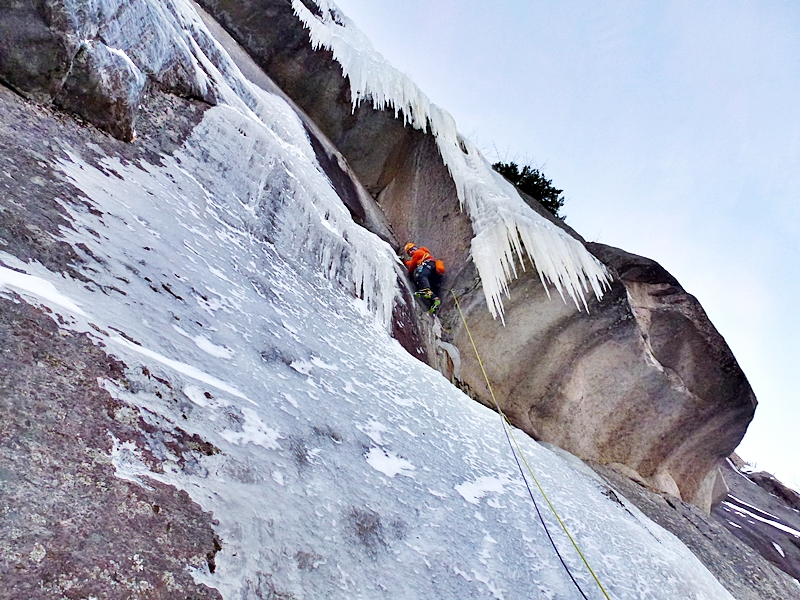 Bayard on what would have been the final hard pitch… All he had to do was step across and swing but he made the mistake of testing the ice! Nick Bullock 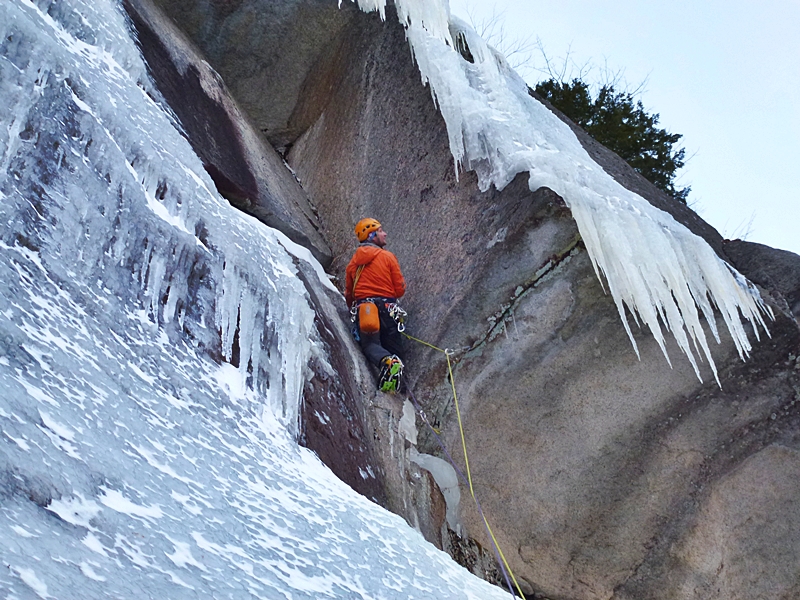 Now you see it, now you don’t… game over! Nick Bullock

Below is a short clip of film of some highlights put together by Bayard Russell.

Leaving Ben, I cleared the fresh snow from a turf corner before climbing a thin sheet of ice at the start of Dropline. Placing a stubby screw, one of the first screws I had placed on the whole trip, confidence flowed. The ice was thick and in comparison to all of the other madness over the last two weeks, easy.

That was Monday, today is Wednesday and what I thought was a broken rib is possibly torn intercostal muscles, which is quite entertaining as my whole ribcage clunks as things move around. I fly to Britain on Friday and I’m not so bothered any more about the conditions up North, oh well, the pendulum of time swings and hopefully recovery won’t take too long.

Finally, I must say, this fantastic trip to New England was only made possible due to the kindness and generosity of several people and it has been so enjoyable because of the locals and their very friendly nature and humour. (You are nearly British 😉 ) So a massive thanks to my friends Anne and Bayard Russell who have put me up in their wooden cottage in the country without question or complaint. To John Branagan from Sterling Rope who paid for my flight. To Ben Gilmore who’s sofa was utilised for three days when Anne and Bayard needed a rest ;-). To Doug Madara for the use of the Scooby and to the Mount Washington Icefest for inviting me over.

And to all of the following for being friendly and helpful and good fun and great to get to know: Matt, Naomi, Kevin and Claire, Sasha, Michael, Freddie, Janet, Scott, Sue, Will, Erik, Ashley, Kyle and Jewel, Caroline and Adam, Pete and Majka, Elliot, Ray, Pete, Rick and Celia, Henry Barber and Mark and everyone else who I’ve forgotten. Thanks it’s been a blast.

Some of the folk at the brilliant Mount Washington Valley Ice festival. Littleoutdoorgiants

3 Responses to The Pendulum Swings. An account and a short film of something different.